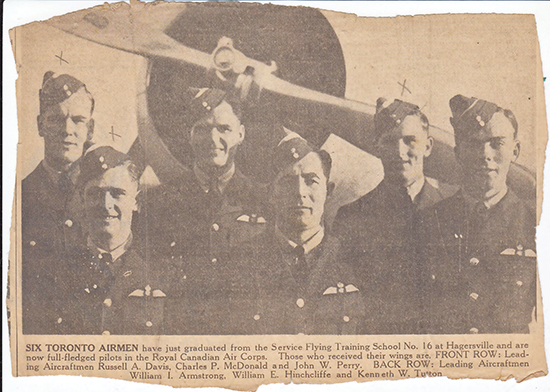 Malvern Collegiate’s formidable rugby team of 1939 steamrolled its way to the city championships. Team members pledged to join the forces together to fight in the Second World War. Several didn’t return, but the memory of one lives on at Trenton Air Base.

Born June 20, 1922, Kenneth Tutton grew up at 17 Firstbrook Rd., the son of Thomas Tutton, an English immigrant from the Isle of Wight. His mother Nellie was descended from the First Nations of Lake Scugog. The fourth of five children, Ken attended Norway School and St. John’s Anglican Church. He was a favourite of his only sister Gladys and had a cheerful nature. At Norway he discovered his natural gift for sports. Malvern Collegiate, with its perennially impressive sports program, proved to be the ideal nurturing ground for Ken’s talents in rugby, football, basketball and ice hockey.

Ken was lucky to have Milt Jewell for his English teacher. Jewell eventually became Malvern’s (and later Jarvis C. I.’s) principal. In the late 1930s, Jewell coached several boys’ sports including the Malvern rugby team, and encouraged Ken to try out for the senior squad.

Ken joined the 1939 team and Malvern’s rugby squad brought home the city championship for the second year in a row. The start of the Second World War coincided with the beginning of the school year.  Malvern joined the war effort by welcoming evacuated teens to the school and raising money for a mobile canteen for overseas. The rugby team decided to join up, many in the RCAF, along with their faculty and coaches Jewell and Charlie Box.

Ken made it very clear that he intended to join the RCAF. Among the friendly jokes in the Malvern yearbook, there is a reference to his focus on the air force. He quit school to enlist in January 1941 and like all local recruits, he had a month of basic training on the Exhibition grounds, where he also took the standard RCAF aptitude test. It would determine whether he would be trained for air crew or ground crew. Up to 5,000 men at a time slept in the coliseum and Ken had a bed in a horse stall.

Ken’s dream of becoming a pilot drew closer to reality as he was assigned to No. 1 Initial Training School near Eglinton and Avenue Road, then to Windsor, Ontario. He spent a month in Windsor studying theory and being subjected to a number of academic and physical tests. If a pilot candidate did not meet the expectations, he would be sent to the Wireless Air Gunner stream. Ken worked hard and when postings were announced, he was deemed pilot material. His flying lessons began at Service Flying Training School No. 16 at Hagersville, near Hamilton, where Anson and Harvard trainers were used. He earned his wings on Dec. 12, 1941. His family attended the ceremony and his sister presented him with a watch to honour his achievement.

In January 1942 Ken shipped overseas to England for more training. Whenever he had leave, he visited his father’s family. Once Ken arrived late to his posting and was considered AWOL. He did some time in detention, mainly digging holes and filling them back in again. Late in 1942 he spent a couple of months at the Operational Training Unit in Wellesbourne Mountford, near Stratford Upon Avon. OTUs trained air crew on the aircraft which they would be flying once deployed. Ken trained day and night on Wellington bombers, flying target and bombing practice. In 1942, the two-engine Wellington was the primary long range night bomber of the Allied forces, eventually supplanted by the four-engine Lancaster bomber. Once crews at Wellesbourne Mountford graduated, they were usually deployed on one benign mission to drop propaganda leaflets over Germany.

On Feb. 10, 1943 Ken arrived at Dishforth air base in North Yorkshire to join RCAF Squadron No. 426. It was a new squadron, formed four months earlier, and the men were known as the Thunderbirds. The commanding officer, Wing Commander Sedley S. Blanchard, was the squadron’s first C.O. He was 31 years old and had studied at the Royal Military College in Kingston. After several years as an army officer, he resigned his commission to join the RCAF where he became a pilot.

On Feb. 14, the day of Ken’s first raid, Blanchard assigned him to his crew as second pilot. No doubt Blanchard wanted to size up the abilities of the new squadron member first hand. At the afternoon briefing they were informed that the target would be the war factories of Cologne. Six Wellingtons from 426 Squadron would join 237 other aircraft in the attack.

Ken’s Wellington took off just after 1800 hours. It dropped its bombs over the target at 2030.

While returning home at 2110, the Wellington got caught in the crosshairs of a Messerschmitt 110 piloted by Hauptmann Manfred Meurer, a Luftwaffe night fighter flying ace. He strafed the Wellington. It caught fire and crashed in a wooded area between Beegden and Heel in the Netherlands. Many in the small villages witnessed the crash and rushed to the wreckage, but no survivors were found. Ken Tutton was 20 years old.

After the Germans had removed the bodies of the six airmen, a villager discovered a watch in the wreckage. Engraved on the watch was “To Ken From Gladys 1941” and his service number – the watch Ken’s sister had given him the day he won his wings.

Ken now rests with the other crew members of the Wellington in Jonkerbos War Cemetery, not far from Beegden and Heel. In May 1999, a memorial cairn was unveiled near the crash site, commemorating the crew that died that night in 1943. Ken’s watch was presented to a representative of the Thunderbird Squadron. It is now on display with photos of Ken in a shadow box outside of Blanchard Hall, Dishforth Building, at Trenton Air Base.

Ken Tutton is only one of the many Beach men and women who left their families and friends behind to join the forces in the First and Second World Wars. Whether they survived or gave their lives, all of them have stories that should never be forgotten.

Thank you so much for an accurate and well-written memorial.

Thank you. What a story. May all the young people of Malvern C.I. and The Beach read it. Thank you Kenneth Tutton for your ultimate sacrifice for our freedom. Lest we forget.