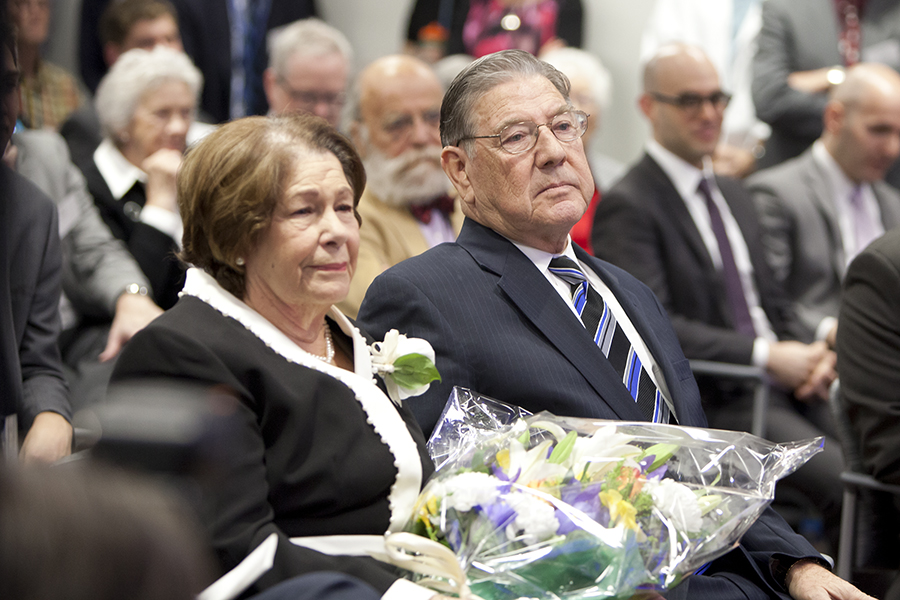 Berna and Myron Garron listen as Sarah Downey, president and CEO of the newly renamed Michael Garron Hospital, thanks them for their $50 donation. PHOTO: Phil Lameira

She didn’t know it then, but when Michael Garron came back to see her after starting Grade 7, he was saying goodbye.

It was September 1974, and teacher Sheila Davidson knew Michael as the boy who always stayed after class to do his work.

Diagnosed with a rare soft tissue cancer at three, he had lost a finger to the disease, then his right arm below the elbow.

“He had to work twice as hard as everybody else,” said Davidson, who taught his Grade 6 class at Cornell Junior Public School in Vaughan.

But Michael persisted. At his Grade 6 graduation, he won the school Achievement Award – a prize for the hardest-working student.

So Davidson was upset when he returned months later and told her he was struggling.

They spoke for about an hour. It was the last she saw him.

Michael died of cancer that January, at 13. Davidson learned that he had known he was dying when he visited her, and that he had made a point of going back to see several others who had played a significant role in his life.

“He was one of the children that in 40 years of teaching I will always remember,” Davidson said.

“That’s why you do the job, for moments like that.”

On Dec. 2, Toronto East General Hospital was renamed Michael Garron Hospital after his parents Berna and Myron Garron made a $50 million donation in his memory.

It was the largest donation to a community teaching hospital in Canada, made five years after the Garrons donated $30 million to establish a cancer centre at SickKids Hospital.

Speaking at the unveiling, Myron Garron told the story behind the family’s latest gift.

Years before he left his bank job to start the auto parts company that made them wealthy, Myron and Berna were newlyweds living in a $67 apartment off Victoria Park Avenue. Toronto East General is where Michael, their first child, was born.

Such research is bound to have ripple effects across Toronto, since the hospital’s patient population is in many ways a microcosm of the city as a whole.

As Downey explained, some 85 languages are spoken by patients at the hospital, and it serves both Thorncliffe Park, a neighourhood with the highest birthrate in the city, and Flemingdon Park, which has the greatest concentration of seniors. Along with affluent areas such as the Beach and Greektown, it serves more low-income patients than any other hospital in Toronto.

The new name, Michael Garron Hospital, will refer to the hospital’s main campus at Coxwell and Mortimer Avenues, Downey said, while corporately the hospital will be known as the Toronto East Health Network – a name that refers to its many off-site programs, including a detox centre at Danforth and Jones Avenues, and a new primary care clinic opened two weeks ago for newcomers in Thorncliffe.

Holding a key that hospital co-founder Joseph Harris used to open the hospital doors back in 1929, Downey said the Garrons’ donation is a modern-day version of that key.

“It opens something new,” she said.