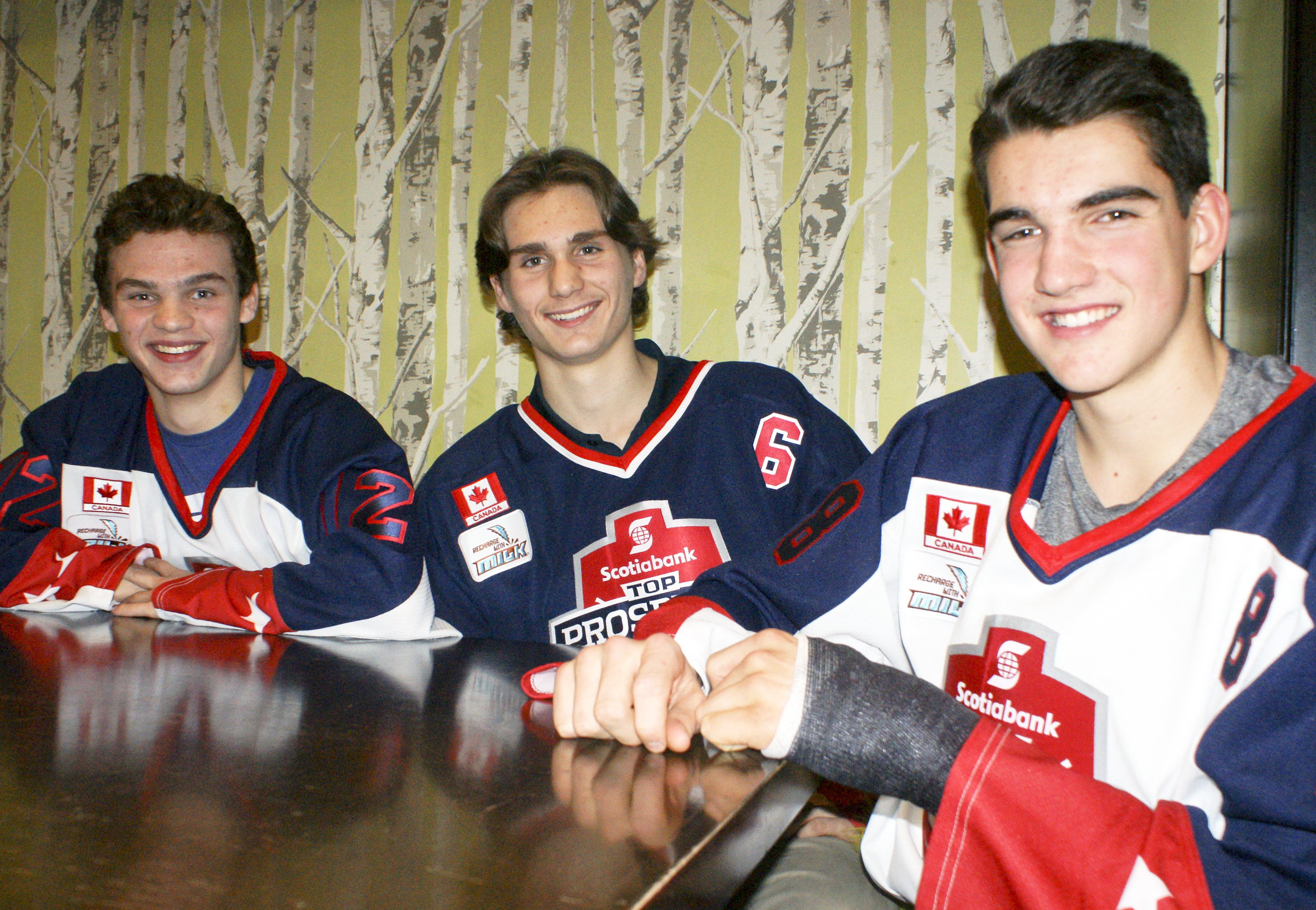 A challenging, fast-paced game with the best young hockey players in the greater Toronto area. An arena filled with 1,500 fans – and scouts to impress. Celebrity coaches – and a shout out from Don Cherry on Hockey Night in Canada – adding to the magic.

For three rising hockey players who got their start in the Beach, playing in the Greater Toronto Hockey League’s Minor Midget Top Prospects game Dec. 15 was a defining moment on their path to – they hope – hockey greatness.

Simply being selected means they are each one of the top 42 AAA players their age in the GTA – no small feat in a league with more than 200 players – and are part of an elite group feeding the professional hockey circuit in North America and abroad.

But while being named a top prospect is a nod to their bright futures, Jack McBain, 15, Peter Musyka, 15, and Zack Young, 16, say they wouldn’t be where they are today without a key figure from their past: beloved Beach hockey coach Bob Acton.

Acton coached all three boys from a young age, teaching them to skate during his after-school and summer camps, held at Ted Reeve Arena, instilling in each of them a strong work ethic and an approachable, positive outlook that has proved valuable so far in their burgeoning hockey careers.

“He taught me how to skate, which is my strength,” said Young, who plays right wing for the Mississauga Rebels.

Young’s parents put him in Acton’s camp before he was even in kindergarten, to try and give their rambunctious son some focus – and it worked better than they could have imagined.

Young said he knew he wanted to be a professional hockey player as soon as he stepped on the ice and hasn’t stopped reaching for that goal since.

One of Acton’s training methods, which focus on developing sharp, basic fundamentals, is to split players into skill levels with each on a different section of the ice. Players are only upgraded to the next skill level when they’re ready.

“One of the things that stuck with me the most is that I was at the one end and I was like, ‘What on earth can I do to get there with the big guys?’” said Young.

“That was my goal. So I would constantly ask him, ‘How can I get there? I want to be out there with the best.’ He was like, ‘Just keep coming here, keep working hard, and just listen.’ That’s what I did and I got there eventually.”

McBain, who plays centre for the Don Mills Flyers, started with Acton around the same time as his friend Young.

“I was really young,” he said. “It was great because he was tough, but he was nice – tough on the ice even though we were younger. He always pushed us, and he is also a great guy off the ice.”

Musyka entered the rink a little later: a late bloomer at seven.

“My parents didn’t want anything to do with hockey. My dad was a basketball player,” he said. “But finally they said, ‘All right, we’ll throw you into house league, but you have to go to skating camp, because you can’t skate if your life depended on it.’ So I went over to Bob’s thing … three times a week all throughout the winter and did summer camps. That’s where it all started.”

The boys praise Acton’s camp – not only did it teach them how to play good hockey, but it taught them the value of a close community.

“His camps were such a Beaches atmosphere,” said Young. “You knew all the kids from school and it was a really tight-knit community, it was really cool. It was a good time as an eight-year-old kid. You felt really included somewhere.”

For the boys, the lessons instilled in them during those formative years have shaped their lives on and off the ice.

“One thing I took out of his camp is just a monstrous work ethic,” said McBain.

“Work ethic – whether you make it in hockey or not, that’s something you want in life. Not only hockey lessons but he teaches you life lessons when you’re at that camp that just stick with you.”

Acton, speaking from his home in the Upper Beach, said he’s humbled by the boys’ kind words. He says the situation the boys find themselves in now is a result of a “tremendous amount of drive.

“At the end of the day when you see athletes like that who are 16, about to get drafted, there’s been a lot of sacrifices to get to that level – it’s the only way you get to that level,” Acton said. “I’m really proud of what they’ve done.”

His camps have been running for nearly 13 years, a fixture in the Beach, born out of a desire to provide a local youth hockey development base so families didn’t have to travel out of the neighbourhood.

Hundreds of area athletes have gone through the now-popular and expanded program, but the first couple of years were quiet, he said.

All three boys are different, Acton said: McBain, a big, all-around athlete with NHL in his DNA (his dad played in the NHL for years); Young, skilled from a young age, fast and hungry (“He just worked his tail off.”); and Musyka, a physical player (he’s projected to grow to 6’7” or 6’8” – not common in hockey) who has only improved with age.

“I haven’t been the guy for every parent. There’s no magic pill,” Acton said.

“These are great kids, great families that love to come to the rink. You can’t get better at anything if you don’t like what you’re doing.”

The boys clearly love what they’re doing and have their eyes trained on the future. While the all-star game marks the beginning of the next period of the boys’ hockey career, it also means it is time to get serious about answering a big question: Do they go for a spot in the OHL or try for a scholarship to an American university? It’s a tough decision that they, along with the help of their parents, need to make soon – the OHL draft is in April, and if they choose the OHL, they lose eligibility for the US schools.

Acton says the next few transition years are going to have some tough moments – leaving the roost, getting to know new coaches and cities.

“There’s going to be some down periods, there always are,” he said. “You have to embrace down periods – [they] are a chance to learn. You’re not going to get a goal or score a home run every night. You may have different coaches, different environments, you’re going to miss your family and friends. In some cases they’ve got girlfriends, that becomes an issue. It’s just going to be a long road with twists and turns. But knowing the three of them, they have the proper makeup to be able to do it because they’ve been making so many sacrifices for so many years.”

Acton himself is in a transition period, on a road with ups and downs. Several years ago, while teaching in Europe, he developed symptoms of ALS, commonly known as Lou Gehrig’s disease, or “locked in” syndrome. That’s meant he hasn’t been able to spend as much time on the ice as he used to.

He’s combating that by engaging in more online videos and video analysis.

“I try to make sure that I’m accessible if you email me or call me,” he said. “I want people to know I’m not in the corner of my house doing nothing. Luckily my voice and that part of my lungs is working good.”

His son, Reid Acton, who has just returned from New York, and another long-time family friend, Ridge Garbutt, are set to play a much larger teaching role at the school, as well. Garbutt is a “phenomenal instructor”, and Reid, who was drafted in the OHL, will carry on the Acton charm as general manager.

What these three boys have accomplished shows that locally-grown programs can work, said Acton, who can count on one hand the number of professional athletes who have come out of the Beach – a fact that makes it all the more unique that these three local players are rising at the same time.

“It’s an opportunity for them to inspire some other kids in the neighbourhood,” he said.

Great article about the “Hockey Hopefuls”.
I have coached the Malvern Collegiate Institute Varsity Boy’s hockey team for several years and have been fortunate to have many players who have benefited from Bob Acton’s training and hockey camps. Several have actually worked for Bob too. These young men have advanced greatly under his watchful eye. The Beach hockey community in general are thankful for his hard work and dedication.
I wish Bob and his family well with his difficult battle with ALS.