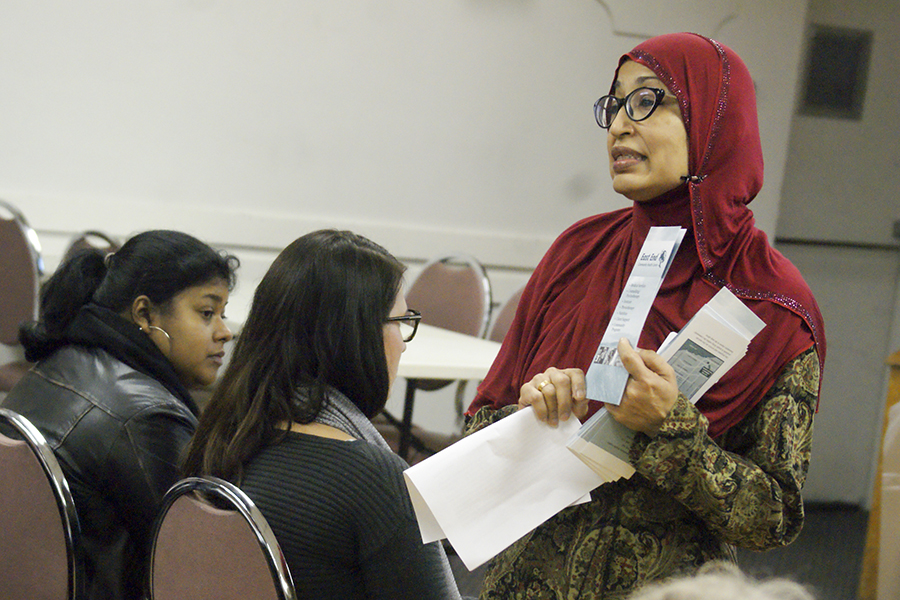 Upwards of 100 people turned out on a rainy Sunday for Beaches-East York MP Nathaniel Erksine-Smith's town hall on Syrian refugees January 10 at the Branch 11 legion. Attendees heard from a number of local groups, like Farzana Yusuf from the East End Community Health Centre, on the programs in place to support refugees. Photo: Anna Killen

Nearly 100 engaged East End citizens gathered Sunday to talk about the logistics of welcoming expected Syrian refugees to the area, laying out plans for what could be called a community-wide welcome wagon of refugee services and support.

The town hall, held at the Branch 11 Legion Jan. 10 and hosted by Beaches-East York MP Nathaniel Erskine-Smith, included presentations from government representatives and various East End community groups. Many of the attendees said they were signed up and waiting to connect with their sponsored Syrian family, while some were looking for ways to donate goods or time. Others were looking for information on sponsorship or what the area can expect when refugees begin to move in.

Erskine-Smith said he anticipates that the number of privately-sponsored Syrian refugees who resettle in Canada will be more than what was initially expected, similar to what happened in 1979/1980 with refugees coming from Vietnam.

“There’s no cap on sponsorship,” he said. “It all depends on the work that we do and the work that Canadians do to sponsor as many as we can.”

In the East End, plenty of work is being done not only to encourage the sponsorship of refugees, but to support the settlement process when they arrive, and attendees heard from local agencies providing care clinics, language training, community dinners and support groups, childcare, employment and social services.

The discussion also veered toward anticipated challenges, with Ward 31 councillor Janet Davis noting that long-term, affordable housing was going to be a challenge.

“Are we going to change our priority systems? No we are not,” she said. “We’ll still maintain the current policies around intake for housing and childcare, which is unfortunate I know because we already have thousands on those waiting lists.”

She said the city has put together a task force to coordinate how to best – and affordably – provide extra services and is considering “whether or not we need to set up a fund in case private sponsorships don’t pan out.”

Immigration Minister John McCallum’s Chief of Staff, Bernie Derible, who has sponsored a refugee family himself, applauded the level of commitment shown by town hall attendees, noting that is consistent with what he’s seen at similar community meetings across the country.

“A lot of the looking after these folks comes down to everyone in this room,” he said.

Residents were reminded of where and to whom they can donate goods and about some of the work that is being done with already donated goods.

ET4Syria will act as a donation hub for small household items (no clothing at this time, explained organizer Christine Starr, pointing out that there are several other drives accepting clothing) and a place for community members to gather and be involved with welcoming refugees. Syrian families will be able to visit the pop-up shop to find things they need for their new home in Canada.

“If you’re looking for household goods or a baby swing for your family, you can come to us,” she said.