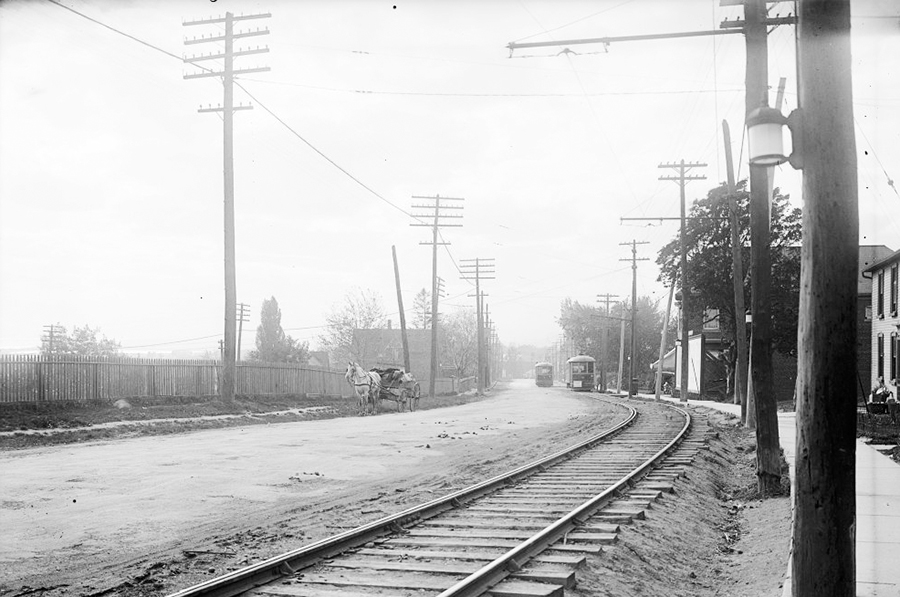 Kingston Road is shown west of Main Street in this photo taken in October, 1922. Photo: City of Toronto Archives

At one time the corner at Kingston Road and Main Street was like ‘Gasoline Alley,’ with a gas station on the southeast corner (later the Dip ‘N Sip), a gas station on the northeast corner (later torn down), and an auto shop on the northwest corner (now Beckwith Garage, one of the few good mechanics left in the area). There was a drugstore for many years on the southwest corner, and a couple of supermarkets on the south side, now replaced by Sue and Charles’ Beach Grocery Store.

Last week there was an awful accident at the northwest corner of Main and Kingston. A Wheel-trans bus ended up between a wooden pole and a building. A man and his two dogs were hit. Both the victim and the driver of the bus were taken to the hospital. One dog died, while the other was taken to a local vet.

This was a terrible reminder that there have been many accidents in this vicinity over the years, even with the advent of traffic lights.

Dawes Road? Yes, dear reader, Dawes Road went directly to Kingston Road before there was a Main Street. From the 1830s until 1884, it was the only way to get to Kingston road and the St. Lawrence Market.

In the day of horses and carriages, stagecoaches and wagons transporting the Royal Mail and farmers’ produce from the outlying areas like Markham, Scarborough, and the township of York, the only passable route was the bridge over the Don River at Queen Street. Hundreds of horse-drawn vehicles brought supplies to the city daily, until the advent of the railroad, the streetcar, and the automobile.

How did Dawes Road become Main Street? It was because of the Grand Trunk Railroad, later the Canadian National Railroad. The GTR purchased some 8.5 acres between Gerrard and Danforth, from Woodbine to Victoria Park, and turned it into a freight and marshalling yard. The problem was that Dawes Road crossed their tracks.

In 1884 the GTR petitioned the government to cut off Dawes Road where it now ends. This is exactly what happened: a street was built to the west, leading from Danforth Road to a rickety wooden bridge over the railroad tracks, right down to Kingston Road. This eliminated Dawes Road, and Main Street then ran south to Williamson Road. In fact Main was slated to meet Queen Street, but this never happened.

Meanwhile, the corner of Kingston and Main entered a very prosperous time because of the traffic. Over the years there were several different names for the neighbourhood.

One was Benlamond. There is still a street named Ben Lamond today. It was named after two land owners in the area: Benjamin Norton and James Lamond Smith. Both worked for the Bank of Upper Canada. James Lamond Smith was the person who introduced golf to Ontario in the 1870s, and the Toronto Golf Club still exists in Mississauga, just past the Toronto boundary.

Another name for the Kingston and Main area was Boston Corners, named for baker Frank Boston, who owned a bakery and a hotel on the northeast corner. This hotel would later be called the East Toronto Hotel, and then the Benlamond or the Benny, a popular watering hole for many Beachers.

There were other names for the wider area, such as Norway, and later the village of East Toronto. Eventually the area became part of the City of Toronto.

The building at the scene of the recent accident was at one time the largest building in the area. It was the office of the prominent Dr. Sisley, who lived and administered to the sick in the area for many years. His sons served in the First World War, and his family still lives in the Toronto area. When one looks at this edifice it was in its day a truly handsome building, almost like an office tower, a beacon of history.

But it is in danger of being torn down, like many other older buildings in the East End. Maybe the developer can integrate this grand old building into the new development – what do you think, Mr. Builder?

We tried to save a couple of buildings on Kingston Road – O’Sullivans’s Tavern and one of our first post offices – to no avail. Maybe we can save this one?

I want to see a picture of the benny. The bar I went to for 20yrs