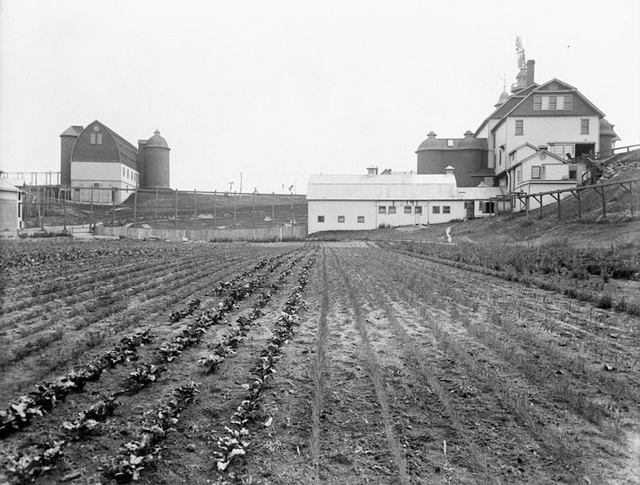 In 1897 Walter Massey created a 100-hectare farm northeast of Toronto’s existing city limits, roughly north of the Danforth between Dawes Road and Pharmacy and including some of the streams and ponds in what is now Taylor Creek Park. He named it Dentonia Park Farm for his wife, Susan Denton Massey.

The Masseys were rich, powerful, devout Methodists and public benefactors, and in 1897 Walter Massey was president of Massey Harris, the largest farm implement manufacturer in the British Empire.

The farm was a family retreat, and a serious, profitable hobby. What makes it worth remembering are two legacies, one of them affecting the health of the whole city, the other the shape of a neighborhood.

The farm, in what might be the Massey family’s most important contribution to the public good, was the base camp for Walter Massey’s pioneering work in promoting the necessity for and production of clean milk.

Toronto was growing fast in this period. The population was about 208,000 in 1900, and 16 out of every 100 infants were dying every year, many due to disease-carrying milk. There were no regulations governing milk, and too often it was filthy.

Milk production at the farm began on a small scale, mostly for the family and friends, later becoming branded as Dentonia Dairy, selling 250 quarts a day. The milk came from Massey’s pedigreed herd of 80 dairy cows whose ultra-modern barn included a milk processing plant that set a new standard.

Pasteurization was still a few years away, and Dentonia followed a process that produced so-called ‘prescription milk’ under severely sanitary conditions, and subject to testing and certification. The Globe carried several enthusiastic stories on the farm, and one reporter wrote, “The cleanliness is beautiful, in fact pure air and cleanliness and sunshine are characteristic of every building on the farm.”

In 1900, under Walter Massey’s leadership, four Methodist businessmen formed the City Dairy Company to, as it advertised, provide “a milk supply for the citizens of Toronto and vicinity under thoroughly sanitary conditions.” By 1903 City Dairy was one of the first plants in Canada to adopt pasteurization, before it became mandatory in 1914.  By 1915 the dairy controlled 40 per cent of the milk business in Toronto, and in 1930 it was sold to Borden’s. Long before that, in 1901, Walter Massey had died at age 37 in what was surely an unfair twist of fate: he died of typhoid contracted from unclean drinking water on a train.

Both his death and his funeral were front page news. Massey died at the farm and a private service held there was conducted by the pastor of what was then Hope Methodist, now the United Church at Danforth and Main. Walter had donated the site and built the manse for the church that his family attended. Following that, a public funeral was held at Central Methodist Church on Bloor Street, with an overflowing attendance of 1,800 people.

Walter’s widow Susan took over the farm and kept it functioning as a business as well as a family enclave for several years. In 1918 she finished building a 100-room house near Victoria Park. Then in 1921 she built a 5,000 square foot home as a wedding gift for her daughter Dorothy and new son-in-law Dr. Arthur Goulding.

By that time the farm was serving largely as a family compound and Susan was whittling it down with results that have lasted to today.

In 1923 the city bought the well-equipped Dentonia athletic field, which still exists. In 1926 Susan donated “60 acres more or less” to the City of Toronto for use as a park with the stipulation that it be known as Dentonia Park in memory of her husband. Then in 1933 she donated 40 acres and her huge house to a private school for boys. It operated there until 1969, when a developer bought the property to build Crescent Town.

Susan died in 1938 at the age of 77. Her daughter, Dorothy ran the Toronto Children’s Theatre from her home near Dawes Road from 1933 to 1958. When she died in 1972 the Massey Goulding Estate, designated a heritage property, stood empty until 1997, when it was restored and became, appropriately enough, the Children’s Peace Theatre, which is still functioning.

And that is why the neighborhood has the Dentonia Park Golf Course, a plaque near Dawes Road and Danforth, an area called the Massey Goulding Estate, a length of Taylor Creek Park called Massey-Taylor, a part of Crescent Town called Taylor Massey, the Dentonia Athletic Field, Dentonia Park United Church, plus a Denton Avenue, a Dentonia Park Avenue, a Massey Square and a Massey Street.

This article is based on a presentation author, journalist and historian Jean Cochrane gave to the Beach and East Toronto Historical Society.

Is there a link to the map? It is too small to see the area that the Massey farm covered.

The map has been updated to link to the full-sized image.

thanks for this article – living in the east end, it is great to hear the history of the area. I know it’s development, but sorry to see that the farm to some extent is what we now see as Crescent Town. Progress, yes, but lost history as well. It’s great the City bought the Massey Goulding Estate – so we can still see something from that era.

Re: The right-of-way of the CANADIAN NORTHERN ONTARIO RAILWAY line, which appears on the old map. Whatever happened to it?