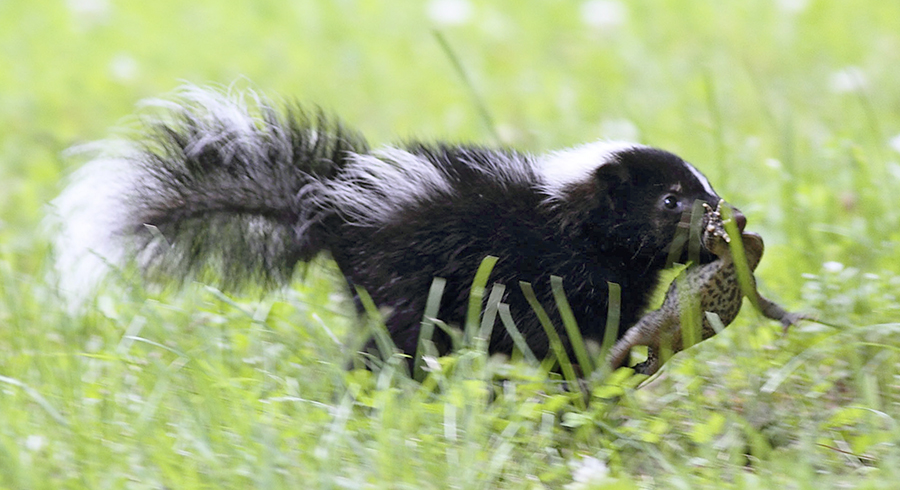 A skunk drags home its next meal, a toad. Pop quiz: What was the name of the skunk in the 1942 Disney animated classic film ‘Bambi?’ Look it up for a laugh. Photo: Ann Brokelman

Who else remembers Pepé Le Pew? He was the hilarious Looney Tunes skunk who chased the black and white cat, purring “‘ello bebe,” in his suave French accent. Well, he was probably adorable in the 1940s, but by today’s standards his refusal to take no for an answer and aggressive pursuit of his love interest would probably have him registered on some sort of list!

Though they may cause our hearts to stop when seen unexpectedly, real skunks (mephitis mephitis) are far less controversial and actually quite interesting little stinkers.

When I first started to watch wildlife I witnessed an amazing sight at Scarborough’s Morningside Park. I had driven to the park to have lunch by the bird feeders when I saw a small skunk dragging something between his legs. I got out of the car and followed him (from a safe distance). It turned out he was hauling a massive toad back to his home. The toad was so large he had to walk backwards to drag it.

But let’s be honest: you can’t have a good skunk story without someone getting sprayed.

A few years ago we had a couple of cousins visiting from Holland. As an animal lover back home, Jef was fascinated with all things wild in Canada. One night he saw, what he called, “a pretty black and white kitty cat” just outside our house and went outside for a closer look. Although this story seems headed toward a smelly ending for Jef, I was actually able to stop him before the skunk sprayed him.

Don’t worry though – not 10 minutes later that distinctive skunk odour filled the air and we knew someone hadn’t been as lucky as Jef.

But let’s be even more honest: you can’t believe I’ve spent all these years as a nature photographer without getting sprayed at least once, right? If you don’t believe that, you’d be correct.

As a volunteer with Toronto Wildlife Centre I once had to transport a skunk in my car. By the time I reached TWC that little guy set off what can only be described as some sort of biochemical weapon that should be outlawed by the Geneva Convention.

While I wasn’t happy that day, I did have the pleasure of learning that their other team had been sprayed 10 times in an hour while loading baby skunks for another release. Always the sympathetic one, the first thing my husband Erle said when I got home was: “Hey, do you know you stink?”

Some cool facts about skunks: A male skunk is called a buck, a female is a doe, and a baby is called a kit. A group of skunks is called a surfeit. A skunk’s spray has a range of up to 10 feet and the smell can travel up to 2.5 kilometres.

The original name for skunk is mephitis, an Algonquin word meaning “bad odour.” The German name for skunk is “Stinktier,” which literally translates as “stink animal.” Skunks weigh between 6 and 10 lbs and are 20 to 30 inches long. Although skunks do not hibernate, in the fall they binge eat and develop a layer of fat that they will metabolize slowly over the cold winter days when food is harder to find. Skunks are omnivores, consuming a vast diet of both plants and animals. I recently found out that skunks are also immune to snake venom!

Ann Brokelman is an avid birder and nature photographer – naturephotosbyann.blogspot.ca

What an enjoyable article to read! I have had my share of skunk encounters, not the least of which was when my smaller dog Moxie ran and grabbed one by her mouth and got a virtual throat and body full of skunk oil on t least a third of her body. We had just moved into our new home and had nothing to clean her with except carpet cleaner and shampoo! Not very effective! I had to laugh at your suggestion that it could be used as a “Bio-chemical weapon” as I distinctly remember being almost unable to aide her in the trouble she was in due to my own retching, but Love prevailed and our dear sweet pup was subsequently restored to her sweet smelling self! (It took nearly a year to fully dissipate).
Thank you for the new facts that I learned about their names, habits, etc., from this article! I did not realize they were omnivores, but it does make sense to me now, as they often were attracted to the food we left out for baby racoons we rescued years ago, as they transitioned back to their natural habitat.

Thank you for your lovely comments. Amazing to learn how many people have had experience with skunks.
Bless the wildlife staff who deal with this every day,