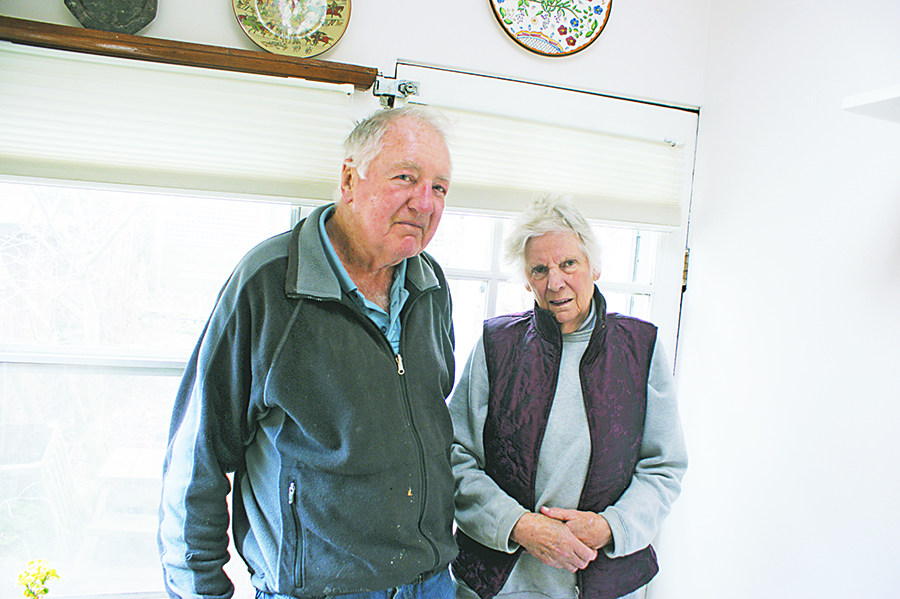 Ken and Pat Hymas will miss looking out over the Glen Stewart Ravine from their Glen Manor West home. PHOTO: Anna Killen

The sale of 250 Glen Manor West draws the curtain on a nearly 50-year run the Hymases experienced looking out at their Beach neighbourhood from their front window – and highlights a wealth of firsthand knowledge of what the area was like then until now.

“We were living on Kenilworth at the time,” says Ken Hymas, of where the couple was when they decided to purchase the house on Glen Manor. “We’d just got infant number two and we were beginning to expand in too many directions, and this was for sale. Of course, in those days, the Beach wasn’t a very popular spot, you know. Everybody bypassed this spot on the way to Scarborough, there weren’t too many people around, and I have an idea that we were the only bidder for this place.”

It’s arguably one of the most architecturally charming houses in the Beach, with a fantastic view looking out onto Glen Stewart Park.

And for the past several weeks, Beachers who passed by – noticing the “For Sale” sign on the front lawn and a similar sign on the adjacent lot – might have wondered what was going on.

“People will be happy to learn it’s not going to developers,” said Pat Hymas, in a tone as charming as the white house on the corner of Williamson Road and Glen Manor Drive. “Absolutely not.”

Instead – and not that there weren’t offers from developers – a couple relocating from Europe is purchasing their house, and, in a moment of coincidence, the  neighbours have also sold their house, that one to a young family.

“Two separate families,” said a pleased Jillinda Greene, the realtor who worked with the Hymases on the sale.

“I think we had half of the city of Toronto (come through the open house),” said Pat.

The family purchased the house for $28,000 – a step up from the $14,000 they received from selling their house on Kenilworth.

“So we moved in,” said Ken. “It was a January 31, as I remember, and surprisingly enough, a little bit like this year, in that it wasn’t raining, it wasn’t snowing and it was reasonably warm. We must have organized the gods to be nice to us, I guess.”

While Ken’s memory of that first day in the house is vivid, it’s the collective memory of 49 years in one space that stands out.

“The memories of sitting out on the terrace here, just looking at the ravine and watching the people go by in the summertime is about as sort of present and quiet memory as any, as far as I’m concerned,” says Ken, turning to his wife, Pat. “What’s your first memory, mum?”

“I was scared stiff,” she says, noting the doubling of investment from the sale of the Kenilworth house to their new purchase of a family home, committing to an untested neighbourhood for the couple who emigrated from London, England and spent time in the ranch-lands of BC.

“When we came here, the Beach was very looked down upon. I can remember Kenneth – a mining engineer, there were very few in Toronto – and I used to go to conventions and they would say, ‘Oh Mrs. Hymas, where do you live?’” she says.

That answer would get a series of sympathetic “Ooohs” from the questioner, but she says she liked the lake, the boardwalk, the schools, the promise and walking distance of Queen Street.

“I always felt that even in the worst weather, I could walk down to Queen,” said Pat.

The proximity of the tennis club and the yacht club also sold her on the home, as well as the natural atmosphere of the ravine essentially in their front yard.

“In the old days, the Glen Manor ravine, the nature trail as we used to call it, we used to go out there with the children to the stream and we picked watercress,” said Pat.

And contrary to the views of those mining colleagues, over time the Beach became a desirable place to live.

“The draft dodgers came in and made an enormous improvement with boutiques and small stores,” she said. “Then after that the media people came in, and it suddenly became … the hot spot.”

Over the years, the house was filled with the sounds of their four children – all of whom worked at Griffiths on Queen Street – and their friends. It was easy for Pat to keep an eye on the children playing hockey and skating on the outdoor rink from her perch.

“I always bought, every year, very brightly coloured anoraks so that I could see them out the window,” she said.

The family had dinner together in the dining room nightly, and often gathered by the fireplace in the living room.

“The two younger ones used to fight over who would light the fire, that was a regular thing,” said Ken, who says he salvaged nearly every piece of wood that went into the fireplace over the last 49 years.

“I brought some down from the north on one occasion, but I think we only bought once,” he said.

The Hymases say the view out their window hasn’t changed too much over the years, but that as more people have moved to the area, trends have progressed.

“It’s a quite a reflection of how things have changed,” said Ken. “In the early years, I used to go cross country skiing on the grass patch by the Beach, and I remember people laughing at me … and of course as things developed, it became the normal thing.”

The house has changed a touch, as well, with additions extending over the front porch and the garage.

“It’s changed in its use over the years, but it’s always been able to reinvent into whatever the children were doing and then of course we took over various rooms for ourselves. It’s going to be a bit hard to downsize,” said Pat.

“We have in the past thought of moving or downsizing,” said Ken. “We did semi-mathematically survey a number of places. Places like Elora, Coburg, Arizona, Guernsey, South of France – there were about eight possibilities and we had to mark them off according to proximity to hospitals, schools, stores, a little bit of water, facilities generally, cost of living. We did the whole bit.

“We did this twice and both times we came back with the score to stay where we were. I’m not saying that was particularly scientific, but that’s the way it went.”

But the time is right for a move. The youngest of the children left 20 years ago.

“So it’s been an empty nest for quite a while,” said Ken.

Ken said the four-bedroom house has become a bit much for two.

“The time we spend going up and down stairs is making things a little bit more difficult. We’re getting to the point where we’re probably going to need a little bit of care and attention in the future, so it’s timely,” he said.

And if you’re thinking the Hymas children might have taken issue with the childhood home being sold, think again.

“They said, ‘Well it’s about time,’” said Pat. “I think they’re all worried about having to clean the place out.”

The Hymases have until at least the end of May to pack up, find a new home, and say goodbye to the house they’ve loved for so long.

Always loved that house, passed it on my way to school from Fernwood to Glen Ames in the 60’s. Good luck to you both.

Lovely story. You both look amazing and you were certainly fixtures on Glen Manor Drive – xo xo Mary (grimbly) Carey