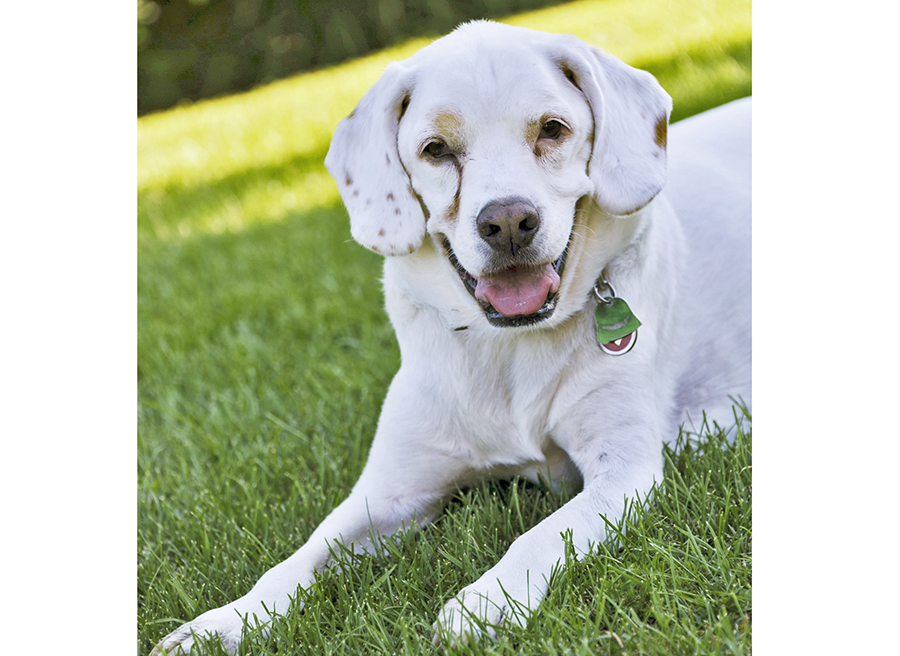 This is a revival story. It seems fitting for the time of year, even if the carelessly optimistic flower buds in my garden were covered by an inch of April snow when I sat down to write this article. Hopefully by the time you read this story, my tulips will have recovered from the shock and humiliation.

Revival comes in many forms – spring is just one. I’m here to tell you about a few others springing from a heavenly place north of Kingston. This year, Catherine and Bill of Sheba’s Haven Rescue celebrate a decade of reviving chronically and terminally ill dogs. The length of each dog’s revival is as uncertain as a spring snowfall, so there’s no point worrying over it. Each rescued dog is like a flower, and everyone knows flowers can’t stay in bloom forever. But while they are in bloom, the dogs on this guest list bring their own unique flower power to the never-ending garden party at the Haven.

While all Havenites are equally special, some actually have fundraising events named after them. A week ago, Ralph’s Rock ‘n’ Roll Revival party was held in Kingston. Ralph, pictured here, is a high maintenance flower. He joined the Haven in the fall of 2013. The approximately 12-year-old boxer/springer spaniel cross had initially been saved by a springer spaniel rescue group, along with his brother Gonzo. But when Ralph was diagnosed with Addison’s Disease, plans to adopt them out together proved impossible. The condition involves a malfunction of the adrenal glands causing lethargy, weight loss and muscle weakness, among other things. Sometimes the patient can experience an “Addisonian crisis” where they will suddenly collapse, requiring an emergency trip to the hospital to re-fuel on electrolytes. Ralph needs lifelong and costly treatment. He found his revival story at Sheba’s Haven.

As it turned out, Gonzo and Ralph were not that close, or Catherine would have taken them both. Once separated, Gonzo readily found a home while Ralph moved into the Haven like a college kid scoring his first apartment. Ralph is happy. You can feel it in your toes, literally. Ralph has a passion for leaning into people at every opportunity. No dog can do ‘the lean’ like Ralph. He’s subtle about it, casually inching his way over to you then sitting by (or on) your feet with a dreamy look on his face. The next thing you know, the weight of an entire dog is against you. If you think a mere pat on the head is going to satisfy him, you don’t know Ralph. It might satisfy Taz, the chocolate Lab that moved in on New Year’s Day 2015, but not ‘Mr. Lean-to.’ No need to worry – one lean from Ralph and you’re leaning right back with all your heart.

Next on the event calendar is Pepe’s Mexican Fiesta on June 5. This year it will include the ‘Running of the Chihuahuas!’ You may recall my article about the Tim Horton’s-obsessed little jumping bean’s first Mexican Fiesta in 2014, in celebration of his 15th birthday. I’d love to tell you that Pepe is still going strong at 17 but his petals are drooping. He may not make it in-the-fur to this year’s event, but you know he’ll be there in spirit.

Speaking of previously featured Havenites, do you remember Clover? She was that beautiful husky/golden retriever mix from Timmins that made her way to the Haven by airplane thanks to Pilots ‘N Paws back in December 2013. She’d lost her sight due to diabetes, but that flight wasn’t the only uplifting part of her story.

Clover has been adopted by a very special man named Glen. Catherine calls him Clover’s knight in shining armour. That’s because Glen brought Clover to an ophthalmologist and financed two costly surgeries resulting in the revival of vision in one eye! Glen receives a grateful wink from Clover every day.

There are many other stories of revival from the Haven, but we’ve only got room for one more here. Let’s call it the revival of the fittest! Not that it’s happened yet, but I’m carelessly optimistic. Of course, the revival I’m hoping for wouldn’t be necessary were it not for the shenanigans of one particular beagle that happens to belong to one particular beagle rescue. I introduced you to Mickey Malarkey in my article promoting Slobberfest last year. Mickey has a heart condition which led him to the Haven. He’s doing great, by the way. We even think he’s adoptable to the right person – someone who will continue to monitor his heart and … be willing to overlook one tiny little character flaw.

Lurking beneath the melting snow on the expansive property of the Haven are, no doubt, many exotic items proudly stolen by Mickey the Moocher over winter. But if the revival gods will only allow for one thing to be revived by spring thaw, may it be YoYo the adorable American Eskimo’s rather expensive leg brace.

Need reviving? Lean on Ralph and the rest of the revivalists at Sheba’s Haven Rescue. Book a visit this spring … and bring your metal detector!

My wife and I have been following Sheba’s Haven Rescue since we became aware of what they do. We recently lost 2 of our precious pets and know what it’s like to provide palliative care for these beautiful family members and we believe Catherine and Bill have created an Angelic Haven and we have been touched in our hearts by our recent visit to the Haven and meeting the gang. Due to what we have been through ourselves and our knowledge of what Catherine and Bill provide through Sheba’s Haven Rescue I have started a unique fund raiser for there organization. I own my own little Real Estate Company in Gananoque and I have begun a fund raiser Treasure hunt that will result in someone taking home a large treasure chest filled with treasures. The end result for Sheba’s Haven Rescue will be 5% of my net commission from 25 sales will be going to the Have. If successful I will make it an annual event. We will be setting up the Treasure Chest display along side Catherine and Bill at Pepe’s Mexican Fiesta on June 5. and other events that will receive us during the duration of the hunt!

I fostered Ralph and Adopted Gonzo. It’s always a pleasure seeing how happy and well Ralph is doing at the Haven. They are truly wonderful people. Ralph is a great dog. I don’t have enough words to express our gratitude at him finally finding his furever home.