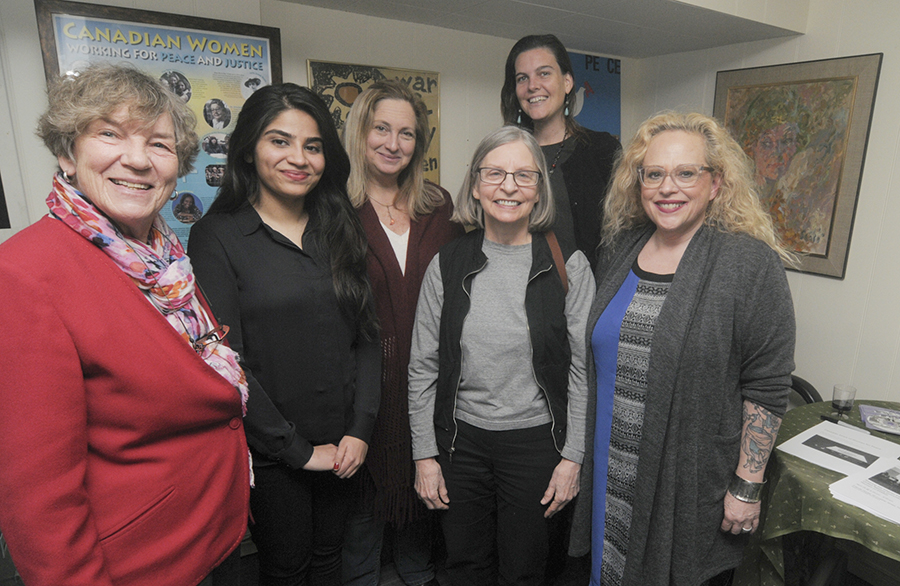 Canadian Voice of Women for Peace members at the outfit's new Beach office on Kingston Road near Main Street. On the far left is VOW co-chair Janice Alton, and on the far right is executive director Sandra Ruch. PHOTO: Anna Killen

In May of 1960, Toronto Daily Star columnist Lotta Dempsey wrote a series of columns in the paper’s ‘Women’ section lamenting what felt like an inevitable third world war, questioning Canada’s role in the global nuclear arms race, and championing the role women could play in its protest.

“I have never met a woman anywhere who did not hate fighting and killing, and the loss of husbands and the terrible tragedy of children dead, maimed or left homeless and hungry,” she wrote on May 21, 1960. “Here lies our strength. In some way women the world over must refuse to allow this to happen.”

Her columns unleashed a torrent of letters and support for her position from women across the country, women asking “What can we do? What do we do?” She quoted letter writer Mavis Wiley in that same column: “It seems to me if we had summit conferences of women dedicated to the welfare of children all over the world we might reach an understanding …” She concluded her piece by suggesting that those concerned write to the UN, and get others to do the same.

Not two months later, on page 15 of the July 29 Toronto Daily Star, an article touted the inaugural public meeting of Canadian Voices of Women for Peace (VOW for short), an organization that would mobilize thousands of women over the coming decades with a mandate of peace and total nuclear disarmament. The group has been instrumental at getting women a seat at the table when it comes to discussions about war and its effects, particularly in the adoption of UN resolution 1325 in the year 2000 and the myriad of further resolutions that have sprung from and strengthened 1325, which at its base states that in all peace negotiations, women and their perspectives need to be an official part of the conversation.

Now, almost 55 years since its inception, VOW presses forward, embarking on the next chapter of its story by planting roots in the Beach and continuing to reach out to women of all ages. April 10 marked the grand opening of its new national headquarters on Kingston Road just west of Main Street.

Women – and men – of all ages and backgrounds attended the open house, indulging in refreshments and discussing how VOW has grown over the years.

“We started in the time when there was nuclear testing, the cold war, a lot of things going on, but women weren’t really being so outspoken,” said Sandra Ruch, VOW’s dynamic executive director.

“Then women started to realize, ‘Oh my goodness, this is going to affect our children’ … So they didn’t get dinner on the table every day at 5 o’ clock. They were out on the street.

“At that time Voice of Women had 6,000 members – back in the ‘60s, it was very exciting. Our main beliefs are about eliminating war – we say the de-legitimization of war. About the elimination of nuclear power in general, not just nuclear weapons – complete disarmament,” she said.

How the group champions that cause has shifted as time has passed. Social media is a big focus these days, letter writing was a focus in the past, summer camps and panels are held each year, and this year a contingent was sent to Ottawa to lobby the new federal government. Underlying all of that work has been a unique focus on and respect for the United Nations. Each year, VOW sends a group of young women to New York for the commission on the status of women.

For 25 years, VOW co-chair Janice Alton has been leading the group to the UN. Alton has been with VOW since the beginning and can testify to the historic changes that have taken place over the last several decades.

“Resolution 1325 – that is very historic,” she said. “That was the victory of much push, not just us but a global women’s push. That took years. When we started in 1960, that’s the kind of thing we were saying – that took 40 years. Since 1325 there have been a lot of resolutions that address women’s issues. So in each of them it’s one step closer. ”

Some women’s advocates might feel frustrated at how long progress takes, but Ruch and Alton are hopeful, particularly about the young women who are part of VOW today.

Alton speaks of a recent international panel about youth peace and security.

“One of our members, who is only 17, presented. She had a very interesting angle, bringing that topic home,” said Alton, noting she talked about Canada’s cadet program.

“We push for the abolition of war, and to change the mindset to move us away from war. So she put forward the program for cadets in Canada, and said this is federally funded, going on for years, despite lots of protest by women’s groups even years and years ago, including ourselves,” she said.

“The cadet program really has a very militaristic overtone – kids wear military type clothing, they learn about arms, it’s pulling back kids in the wrong direction. So our contribution to that was, let’s look at cadets and let’s see … maybe the training could include peace building options for kids instead of the war fighting.”

And they both say that when it comes to women’s issues, it’s important to consider the broader picture.

“If we look at the big picture, roll the clock back 100 years, if you think in those big hunks, we have made progress,” said Alton. “Huge progress. We have to keep pushing for the things that we think will make a better world.”

“In every single thing that you work at it feels like, ‘Oh my god, how much longer are we going to do it?’” said Ruch. “But something always comes that renews your belief that there can be change. There’s always something.”