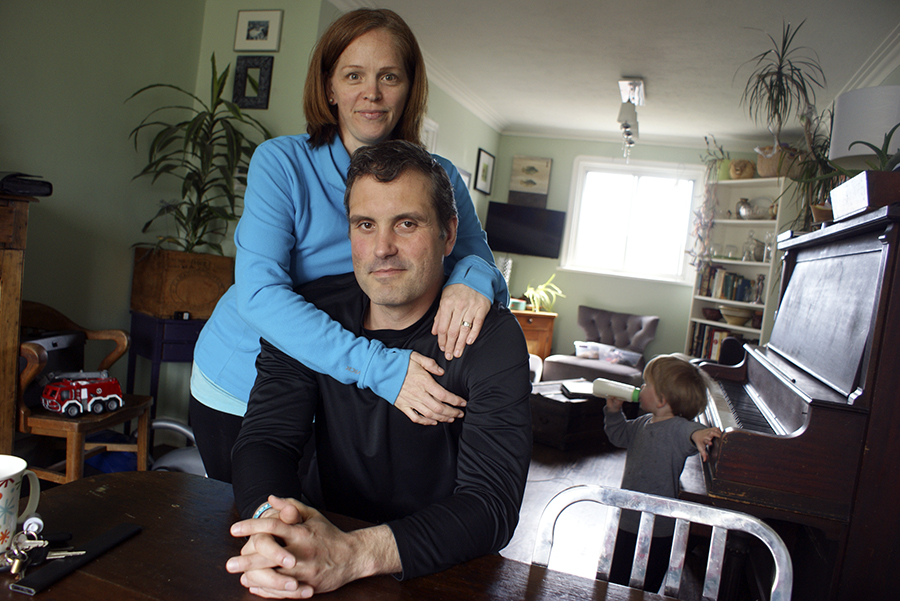 Christine and Matt Kavanagh, with two-year-old son James in the background, at home on April 28.

One Sunday in the fall of 2014, born-and-raised Beachers Matt and Christine Kavanagh invited their neighbours over for a dinner party. At their house on a quiet street just southeast of Gerrard and Victoria Park, Matt made martinis, smoked brisket and pulled pork, and the neighbours – some of whom had lived on the street for over 50 years and hadn’t once attended a neighbourly BBQ – had an opportunity to get to know each other, a value that’s always been important to Matt.

Early the next evening, while at the kitchen sink washing the martini glasses from the night before, Christine answered the phone to devastating news. Her husband had suffered a seizure. She rushed to the hospital, leaving her young daughter, the eldest of three, with her father.

Matt, an ambitious man on track to become a pillar of the community through his work as a coach, mentor and burgeoning leader in the education system, was diagnosed with a terminal brain tumour. Shortly before Christmas, he underwent a craniotomy to try to remove as much of the tumour as possible. He went into the surgery knowing that there could be any number of complications – the tumour is in a particularly difficult spot in his brain – and when he woke up, the family learned that the surgery had left him with a brain injury, a rare neurological condition called Gerstmann’s Syndrome.

“They did their best to remove what they could, and essentially some good brain material was scooped out (along with portions of the tumour),” said Matt. “Aside from the tumour itself, which will continue to grow and cause problems in the future, immediately I was left with a suite of problems that affects all sorts of things.”

Matt, a high school science and history teacher, is adept at explaining the nuances of his condition. His short-term memory is affected, as is his balance, spatial relations, depth perception. He struggles with right-left confusion and proper application of force – when he shakes someone’s hand, he has to think about which hand is the correct hand, and then how much force to use.

“One of the reasons that I’m still tired and fatigued is constantly living in this hyper state of consciousness,” he said.

He’s always been a very patient person with a gift for reading people, said Christine, but that part of his personality has been affected by the brain injury – irritability and anger are new issues he is working on in therapy, and he is involved in clinical trials.

“There’s a lot of internal, a lot of stuff you can’t see,” said Christine, noting that to a passerby Matt looks fine – he’s developed a variety of compensation strategies.

“The past year-and-a-half has largely been focused on just getting me to where I am now, which is reasonably stable,” said Matt. “There’s still a ways to go but at the end of the day I’m walking, I’m talking, I’m functioning more independently. I hope to be released back out into the wild come the fall.”

Now, the family has started having conversations about what the immediate future – and long-term future – might look like. Top of mind is the family home, a space that was fine for the family of five before Matt’s condition, but now is cramped and dangerous for Matt when he works in the kitchen – he’s always taken care of the cooking.

What started as a conversation about opening up the kitchen and renovating it to make it more safe has now turned into a much larger conversation, one about how to ready the home for palliative care needs down the road. Part of those discussions were sparked by the family’s experience at Gilda’s Club, a therapy and support network in downtown Toronto.

“They do some really special things,” said Christine, noting that the children’s program uses art therapy and drama to help children work through learning about cancer and what it means.

At first, only the Kavanagh’s eldest daughter attended Gilda’s Club, but now the whole family attends. In her group, Christine met a woman whose husband was at the end of 10 years with the same brain tumour as Matt.

“He was in palliative care at the home, dying, and every week she would talk about his decline and his needs,” she said. “It really got me thinking, our house is not ready for that… I don’t want him in a hospice. We want him home. And yet we don’t want to move. We’d lose our support system.”

It’s important to the Kavanaghs that Matt have independent space, for his own needs and to provide some normalcy for their children.

“For me, they are the primary concern – and Matt’s independence and dignity,” said Christine. “If Matt’s gone, he’s gone, but the kids will always live with his brain tumour for the rest of his life. They’re going to be young – unless something happens, they’ve broken the blood barrier at Sunnybrook, so that’s hopeful, there’s always new stuff coming out, but realistically as of today that’s what we’re facing and if things change, great, then he still has the proper space.”

That’s where Christine and Matt’s support system comes into play. Believers in being open, they asked their community for help, and very quickly a plan was born: designers, builders, an occupational therapist, and others came on board to help the Kavanaghs with their wish list – a bedroom and ensuite on the main floor, an open concept – and organize a benefit fundraiser to help pay for the renovations.

“They’re community people,” said Matt, of the friends he’s collected along the way who have rallied around him.

The Matt Kavanagh Benefit Fundraiser Party is this Friday, May 6, at the Balmy Beach Club.