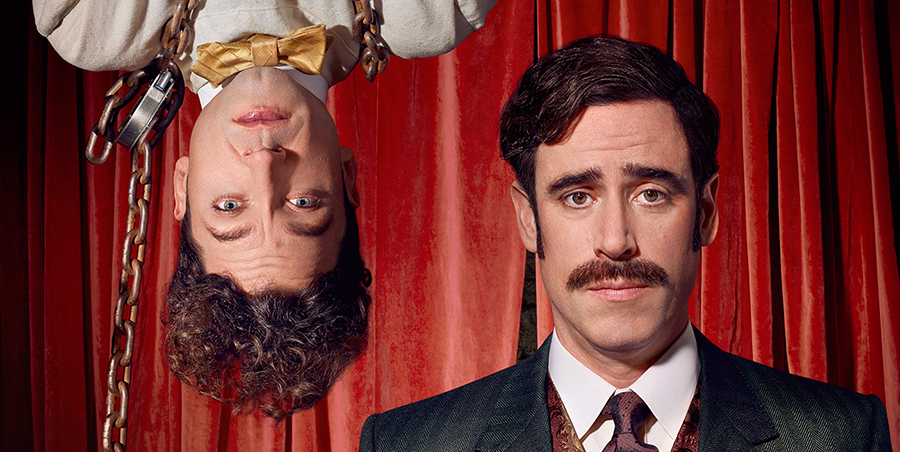 Fans of Murdoch Mysteries may enjoy Houdini & Doyle, a new supernatural crime series which will appear before your very eyes Mondays at 9 p.m. on Global TV. This Canada/UK co-production originates from the same Toronto film company Shaftesbury.

Both shows are period dramas set in the early 1900s with the costumes, vehicles, manners and issues of the day. Will women ever get the vote? Will the automobile replace the horse and carriage? Is it the Beach or Beaches?

Detective William Murdoch solves intriguing cases through reason while Constable Crabtree looks for otherworldly evils. One of the amusing conceits of Murdoch is that famous people like Sir Arthur Conan Doyle, Mark Twain and Thomas Edison get involved in Toronto murders. Who can resist a “Houdini Whodunit” (2009)?

Like Murdoch, master illusionist Harry Houdini and Sherlock Holmes author Doyle are brilliant men ahead of their time. This was an era where the worlds of science and spiritualism collided. Oddly enough, it is Doyle, the creator of the famous deductive sleuth, who is the true believer in the unseen, while magical Houdini is the skeptic who says, “Never believe what you don’t see with your own eyes.”

These two geniuses team up to help New Scotland Yard solve bizarre murders with the aid of London’s first policewoman Adelaide Stratton (Ryerson grad Rebecca Liddiard). The first eight episodes are set in England, but then the action shifts to Toronto as Houdini and Doyle investigate a homicidal poltergeist along with Thomas Edison (played by Peter Outerbridge, who was the original Murdoch). St. John’s Norway Cemetery was a filming location for this ninth of 10 episodes.

Hoselton admits that “history is fudged in favour of story” and promises “ghosts, vampires and other beasts that go bump in the night.” Oh my! Gene Domagala better be careful when he leads his spooky night walks through St. John’s!

Houdini & Doyle is “inspired by a real-life friendship,” though the mismatched duo didn’t actually meet until 1920.  Harry Houdini (1874-1926) and Arthur Conan Doyle (1859-1930) were unlikely friends, but had a falling out over Houdini’s debunking of spiritualist mediums. The legendary, death-defying escape artist thought there was no escaping death, but, “Sir Arthur believes. In his great mind there is no doubt.”

In 1922 Houdini performed a stunt over Niagara Falls for the movie The Man From Beyond.  The next year Doyle wrote, “My dear Houdini, for goodness sake take care of those dangerous stunts of yours … Is it worth it?”

In his books Doyle brought his famous creation Sherlock Holmes back to life after certain death at Reichenbach Falls, but Doyle couldn’t save his friend Houdini who died on Halloween in 1926.

Houdini’s widow, Bess, tried to “contact” her late husband in yearly séances on Halloween, but gave up after 1936 declaring, “Ten years is long enough to wait for any man.”