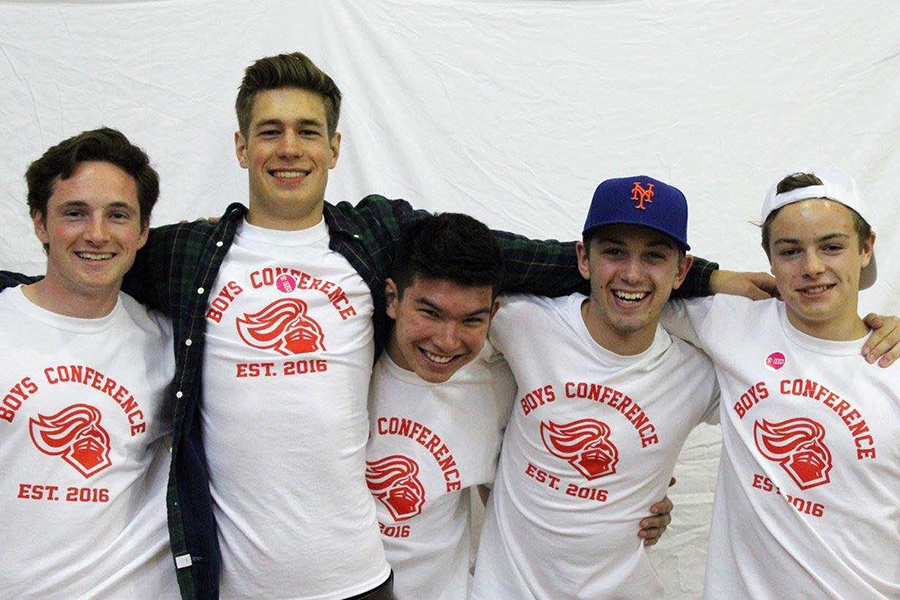 For several years, the young women at Malvern Collegiate Institute have been hosting a successful women’s empowerment conference each spring, the largest in the Toronto District School Board.

It’s a powerful community mentorship opportunity that grows and inspires each year, and this year’s, held May 6, was no different.

But one thing that was different at Malvern this year was an opportunity for the boys to get together in a similar fashion.

May 5 marked the first Malvern Boys Conference, with 50 Grade 12 leaders introducing nearly 150 soon-to-be Grade 9s to Malvern and some of the issues facing young men.

The conference was the brainchild of Eric Shuell, who is graduating from Malvern this year and has been heavily involved in Malvern leadership groups throughout his high school career. He’d seen the success of the girls’ initiative since he was in Grade 8 at Glen Ames, and thought it would be impactful to have a similar event for boys.

He reached out to one of his mentors, Mike Izzo and his peers to make it happen. (“He always provides good insight,” he said. “Mr. Izzo is a guy that I’ll remember for a really long time.”)

“Boys and girls face different problems,” said Shuell. “There are different issues that relate to each gender. And I think that there’s been a lot of really good things for girls recently – feminism is a huge movement, it’s really, really great and I support it a lot.”

But boys, particularly boys entering high school, can benefit from having a space to talk about issues directly affecting them.

The conference facilitated discussion through workshops, some led by his female peers, and speakers. Jesse Hayman from the Movember organization gave a keynote speech on the definition of masculinity, and workshop topics ranged from things like smart social media use to healthy relationships to myths about what it’s like to be a Grade 9 at Malvern.

“This is an opportunity for these boys to feel like real high school students, real role models. When you’re going through a transition from Grade 8 to Grade 9, you need role models, so I think this is a good chance.”

Shuell said he was aware that the idea for a conference specifically for boys might sound counter-intuitive to some, noting the not-so-positive men’s rights movement and groups and the historical dominance of the male gender.

“The whole men-rule-the-world thing is really true,” said Shuell. “I think that people immediately jump to that when they hear ‘boys conference.’ But nobody shot it down, everybody just asked questions about what it was about before passing judgement, and as soon as we started explaining the point of it, then everyone agreed it was a good idea.”

He said there might have been “a little bit of doubt at first about what topics we were going to cover, but as soon as I explained it to people they were super, super understanding.”

While the conferences might be separated by gender, Grade 12 leaders of all sexes help facilitate both.

And ultimately, the goal for the next class of Malvern is the same.

“The goal is for the future of Malvern, the future of the community in general to be more open-minded than trying to conform to what society pushes us to believe is right or wrong,” said Shell.

“Boys feel like they have to fit in – whether that means they need to play sports, go to parties, put other people down to make themselves look better, that’s things that we’re trying to eliminate in the future.”

Seriously? The majority of homeless are men. Boys are some 20% less likely to go to college and most likely to drop out of school altogether. The vast majority of suicides are men. Despite Domestic Violence occurring at 50-50 ratios 100% of government funds goes to helping women. Women’s cancers receives twice as much funding than men’s cancers…..I can go on.

In reality less than 1% of the world’s elite runs the world. Men in fact are considered disposable. There’s a great video I watched recently on YouTube that I believe is called “Men are Disposable” by Karen Straughn(sp?). It was a real eye popper.