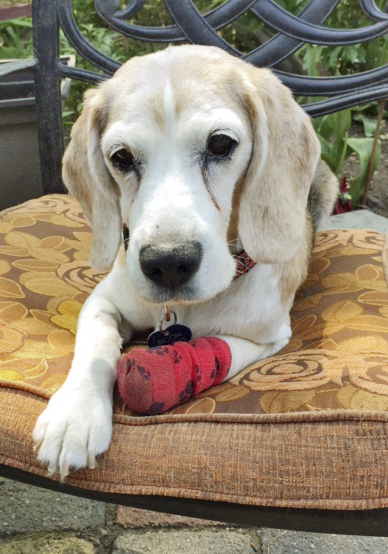 Don’t tell anyone, but before I started my little beagle rescue, I had a habit of mixing up beagles with basset hounds. I know the difference now. While they might both resemble cartoon characters, beagles are less exaggerated.

No offence to basset hounds of course, but the body parts of your average beagle are in closer proportion with one another, resulting in a more aerodynamic, crash-resistant dog. For instance, the roomier ground clearance between runway and underbelly significantly reduces the risk of interference at take-off. During flight, the shorter ear span helps to cut down on turbulence. I realize basset hounds have been known to defy gravity (and logic), especially in a race towards a finish line made of cookies, but the fact remains: a beagle will never lose a marathon due to tripping over his own ears.

The other basic fact is that, despite my overly-affectionate foster beagle’s efforts to prove otherwise, there’s less drool. I suppose that’s why the event organizers at Community Centre 55 stuck with the adorable basset hound cartoon image as the ad icon for Slobberfest. Nobody slobbers quite as effectively as a basset hound. Chalk it up to gravity, unrestrained joy, and droopy jowls.

Nevertheless, an army of competitive beagles will be giving it their slobbery best on Saturday, June 4 when Slobberfest once again washes over the boardwalk at the Leuty pavilion. It really shouldn’t be too hard for our homeless howlers given how much there is to drool about, i.e. hot dog and ice cream eating contests! If anything can get a beagle to slobber better than a basset, it’s the anticipation of food in their belly – especially the forbidden kind found high above their heads on that seemingly unattainable dinner table.

For the beagle pictured here, however, anything but soft food is strictly ‘off the table’ until his sore little mouth heals. Our latest rescue case just had 19 teeth removed. He’s a real trooper, albeit practically toothless.

We got a call from the folks at the Guelph Humane Society in April. He’d been wandering alongside the 401 of all places. Safely back at the shelter, the vets guessed him to be roughly 15 years old. He was undeniably cute but they had their concerns about his health. Besides a mouthful of gruesome teeth, he was sporting some lumps and a ghastly open sore on his neck. They detected a heart murmur too. And if all that wasn’t enough, he also appeared unsteady on his feet, which would require further investigation. It was hard to tell whether it was serious trouble or that he was just a seriously bad dancer.

This lumpy old stray beagle with the funny walk still had a spark in him. Not a bark, strangely enough, but definitely a spark.

We took in the little highway patrol man. As it turns out, they were right about that spark!

Blood tests revealed he was in fairly good shape for an old guy. The sore on his neck turned out to be a benign cyst. A visit with a cardiologist proved his heart was strong enough to undergo dental surgery – a relief considering the discomfort those decaying teeth had been causing him. The surgery ultimately included lump removals with special attention to a mass on his foot that sadly required the removal of one toe.

But we’ve got high hopes he’ll dance again. As bad a dancer as he is, there is nothing more entertaining than watching the canine version of Napoleon Dynamite practice his moves. As for the sway to his swag, it’s a wait and see situation. Paws crossed, it’s just part of his lucky charm. Maybe his Mr. Magoo eyesight is also partially to blame. Whatever the cause, we picked the perfect name for our tiny dancer: Patrick SWAYzee!

Now that Patrick is on the mend, it’s about time he paid us back, so he’s been named Big On Beagles’ ‘Official Wiggler’ for our third annual Beagle Wiggle Walkathon at Slobberfest this year. It’s not too late to pledge him (bigonbeagles.ca)! But we’re just kidding about the payback part – he pays us back every time he dances. Nobody is putting THIS baby in a corner.

Who will be crowned this year’s Slobber King and Queen? To find out, get thee to our kick-off to summer at Slobberfest on Saturday, June 4 from 9 a.m. to 3 p.m. at the foot of Lee Avenue. Enter fur-flying contests, shop for your pooch, and support local rescue groups. BOB Rescue will be joined by Canadian Chihuahua Rescue and Transport and Canadian Dachshund Rescue!

Big slobbery kisses of gratitude go out to the event organizers at Community Centre 55 (centre55.com), raising funds for their Share A Christmas pet lovers program.