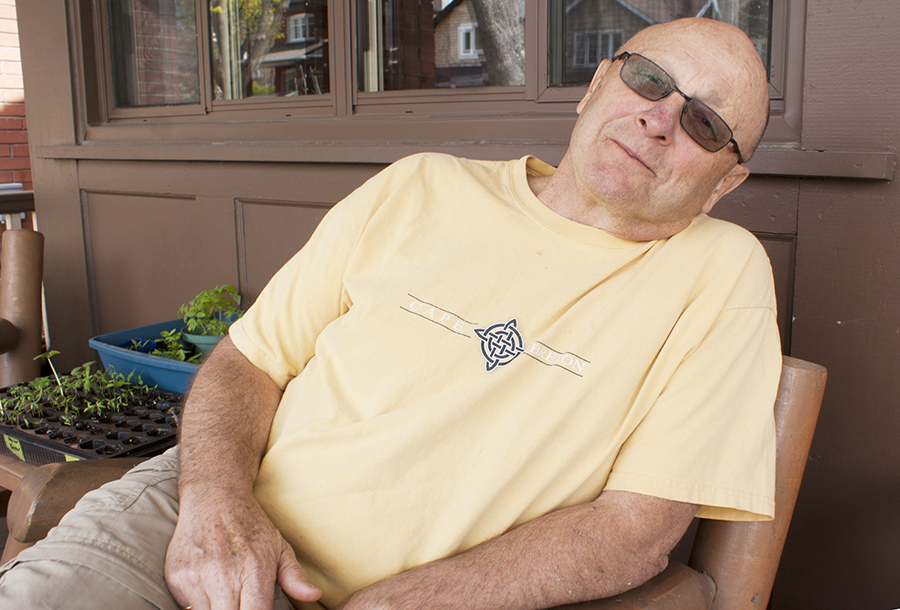 Beach Hill neighbourhood, resulting in a successful Jane’s Walk. He plans to repeat the walk at next year’s iteration of the annual celebration of city life. PHOTO: Anna Killen

Spend a few hours with Michael Hume on his Beach Hill front porch on a warm spring day, and it’s a wonder the places the conversation will travel to – early memories of Toronto’s other Little Italy at St. Clair and Lansdowne, cities like Cape Breton, Belleville, Vancouver, Haida Gwaii, Vernon, Buenos Aires, Tangier. And that’s before he brings you inside to show you the photos he’s taken during his travels, candid and captivating, covering the walls.

Hume is a man who thinks about place – not only countries, cities, and neighbourhoods, but our place within those places. A recently retired long-time teacher, Hume majored in history and believes that “to some degree, history explains why we’re where we are. It puts things into context, give you a sense of place. We all have our own history.”

Those who chose Hume’s Jane’s Walk on the festival’s Saturday earlier in May – several excellent sounding East End walks took place at similar times, but this was the only one with a title involving a duel – were not only treated to sunshine for the latter half of the walk, but also had a chance to experience Hume’s enthusiasm for learning, and sharing, the context, history, and, to some degree, present state of the area that encompasses the western side of what is generally called the Upper Beach (think: north of Kingston Road to Gerrard, Coxwell to a bit east of Woodbine). That particular area can also be further categorized into the neighbourhood called Beach Hill – something Hume was interested to learn from one of the people on his walk.

Before compiling the walk, Hume researched to see what walks had been done in the area. “There is a Jane’s walk that had been done for the church and the graveyard and there’s one for the ravines, but no one had ever done one for what I found out is known as Beach Hill,” he said, calling it a “grievous error” that he hadn’t known the term before the walk.

“The Upper Beaches: A Duel, Graves and Golf, Forgotten Waters and Moderately-Priced Homes” was born out of Hume’s general curiosity to learn more about the area he’s lived in for more than 30 years.

Born in Toronto, he’s been passionate about the city since he was a young boy, and even though he spent 12 years in BC, he always knew Toronto was home. When he and his family moved into his house on Normandy in the ‘80s, it was the home he’d been waiting for – a front porch, tight-knit neighbours, part of the city’s urban fabric.

“If we were sitting here when the neighbourhood was built in 1922, these would probably look as monotonous as those developments out in the 905 region,” he said, gesturing down the street. But over the years, the neighbourhood’s character shifted as different people moved in and out.

“The neighbourhood by the ‘50s was a blue collar neighbourhood, but it had become more accurately a journeyman’s neighbourhood,” he said. “Plumbers, electricians, butchers, that sort of thing, that’s what I was told. And then by the time we moved in, I was a teacher, Kathy (Hume’s wife), she worked at SickKids. So we moved in and we started pushing – people like us were pushing people out of the neighbourhood. They were selling and moved out to the 905 region. Their perception of the neighbourhood was different than mine. They wanted a big lot, suburbia.”

While he pocketed bits and pieces of the area’s history over the decades, it wasn’t until he retired three years ago that he started seriously collecting.

He knew he wanted to lead a Jane’s Walk – he’d been on several in the past – and focusing on the area immediately around him seemed like a smart path forward. That didn’t take away from his general Toronto curiosity (one of his goals is to ride his bike on every street in the city) nor continued desire to travel (one of the reasons this walk took so long to prepare is that his research kept getting interrupted by travel: Alabama, the Balkans).

Hume credits much of the initiative to finish the walk for this year’s festival to his son’s interest in urban geography, and a discovery he made one night at one of the local library branches. Hume said his son came over for dinner and noted that he’d been in the Gerrard-Ashdale library, where he’d found a metal filing cabinet filled with photographs and articles about local history.

“At one point all branches used to have a local history file, but they amalgamated to some degree,” said Hume.

He figured out that the local files were held at the Gerrard-Ashdale and Beaches branches and spent hours poring over the information.

“I went through every single file that was remotely related to what I wanted to do,” he said. “That’s where most of the information came from.”

He and his wife also went for walks around the neighbourhood, taking notes. Sometimes there would be no information at the Toronto archives or the local libraries, so Hume would have to rely on other methods – like good old fashioned door knocking.

One of the points of interest on Hume’s walk is the “Lego house” on Coxwell Avenue. While there is information online about the house, Hume found deeper material by knocking on the owner’s door – and also asked permission for a group of walkers to gawk in front of the home for several minutes during his tour. The owners obliged.

He dove deep into specifics about the golf course that used to cover the area, clarifying some aspects but accepting of the fact that questions remain (the golf course, long moved to the suburbs, has the wrong boundaries mapped out on its website, he said).

As for further points of interest, Hume intends to lead the walk again, so this reporter won’t give them away.

Near the end of the porch conversation, one of his neighbours pops up the steps. She’s been talking with a friend who had also been on the walk, and wants to share an idea.

“Historic restaurants in the area, she wanted me to pass it along to you,” said the neighbour, who mentioned that her friend said it should be called Mike’s Walk.

Hume, clearly flattered, takes the idea, says it’s a good one, but demurs to call it anything other than a Jane’s Walk.