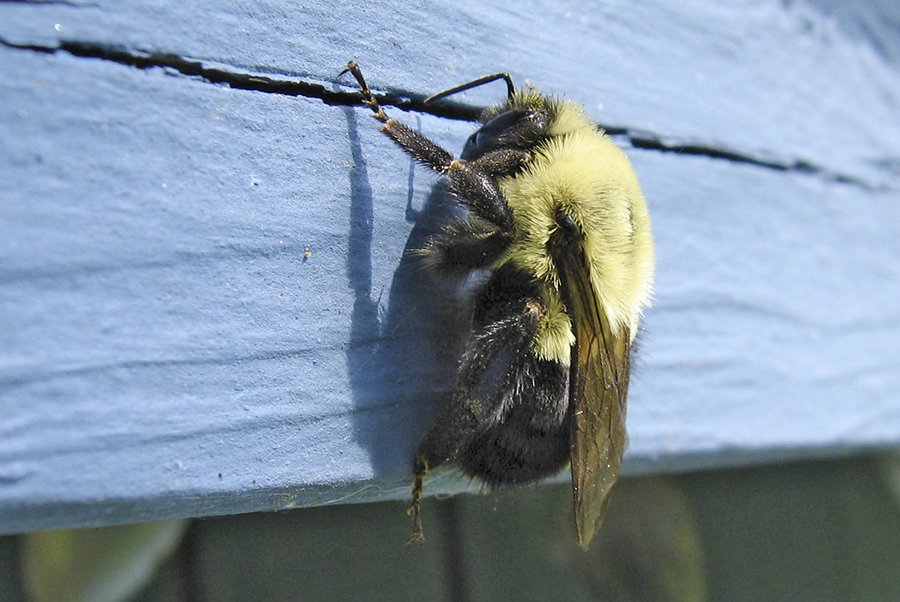 This hard working bumblebee doesn’t appreciate being called a wasp. Read on to find out the differences between bees, wasps, bumblebees and hornets. PHOTO: Martina Rowley

Every year when the warm season arrives and flowers, shrubs, and fruit trees bloom and provide nectar and pollen for hummingbirds, butterflies, and other insects, often-feared and misunderstood little yellow and black ‘buzzers’ start arriving too.

The differences between “the birds, the bees, and the butterflies” are surely obvious, but do you know who’s who when it comes to bees, wasps and their kin?

One misnomer I hear cried out often – mostly in a panic – is, “Bee! Bee!”, generally accompanied by wild flapping of the arms. No need to insult bees when you are in fact panicking about a wasp. Here are some clues on how to tell what’s what.

Bumblebees are my favourite! There are 50 known species in North America, with sizes ranging from 1 to 3 cm. Bumblebees are plump with no defined waistline, very hairy, and have thicker legs and a more rounded “bottom” (honestly, I’m talking about bumblebees here!). They have fewer stripes, which can be either yellow or more orange and black. They nest underground and when they fly they seem to be bumbling leisurely, but with great intent, from flower to flower, seeking nectar and pollen. Even though they can sting multiple times, bumblebees rarely sting and only when threatened – for example, by a giant human swatting at them.

Yellowjackets and European paper wasps are two species of wasp. Worldwide there are some 30,000 wasp species! Wasps range up to almost 4 cm in size, and yellowjackets are the more aggressive of our North American species. Here is where you want to watch yourself and young children. They are likely the ones you see flying around garbage cans or dropped pop cans or cups – they like it sweet. Be very mindful of drinks (especially pop cans), popsicles and ice cream. Always look at your food before you bite into it or take that next sip!

Wasps typically start appearing in mid to late summer. They don’t have any visible body hair, are more yellow than black – you’ll see more yellow as they buzz around you and your food – and have a noticeable thin waist and pointed rear end. That is where their painful stinger sits. Yellowjackets and other wasps can sting multiple times, so avoid swatting at them repeatedly – that will make them more aggressive and more likely to sting. If a wasp wants your food or drink, move away, and cover up food sitting on your picnic table. Yellowjackets often nest underground in rodent burrows, so beware, gardeners! Paper wasps nest above ground.

Equally aggressive are hornets. They are related to yellowjackets, can grow up to about 3 cm, also have a distinct waistline, and have no noticeable body hair. They nest above ground. Again, they don’t normally sting unless provoked, but some people can have an allergic reaction to their venom if stung. The first and last time I saw a hornet, though, was decades ago in Germany. That one was huge. My father sent us kids indoors to safety and chased it off with a can of insect spray.

Lastly, honey bees. They are typically ‘gentle’ – again, unless threatened – and are the hard working insects that provide us with delicious honey and fill a vital role as food pollinators. There are some highly aggressive bees, such as Africanized bees, which have – so far – come no further north than the southern US.

Honey bees have dull yellow or even brownish and black stripes, have some body fuzz, and are smaller than bumblebees or wasps (0.5 to 1.5 cm). They nest in cavities, such as beekeepers’ boxes or hollowed-out tree trunks. A honey bee can sting only once because its stinger detaches and stays in its victim, thereby killing the bee – so it really doesn’t want to sting anyone if it can help it.

In the past few years there have been many reports on a sharp and disturbing decline of or collapse of honey bee colonies in Canada and other countries. Many point the finger at insecticidal neonicotinoids (or ‘neonics’), while others say mites are killing the honey bees. To cover this topic appropriately, I would need a whole separate article (I might tackle it in a future column).

For now, I will just say that insect pollinators are amazing! They are responsible for the pollination – and therefore the success of harvests – of a third of human food, with honey bees providing an impressive 70 per cent of that ‘work’. A study by the Parliament of Canada called The Importance of Bee Health to Sustainable Food Production in Canada estimates the annual value of bee pollination in Canada at $2 billion, and US $200 billion worldwide.

That is very impressive from such small creatures. So the next time you see a wasp, please don’t call it a bee!