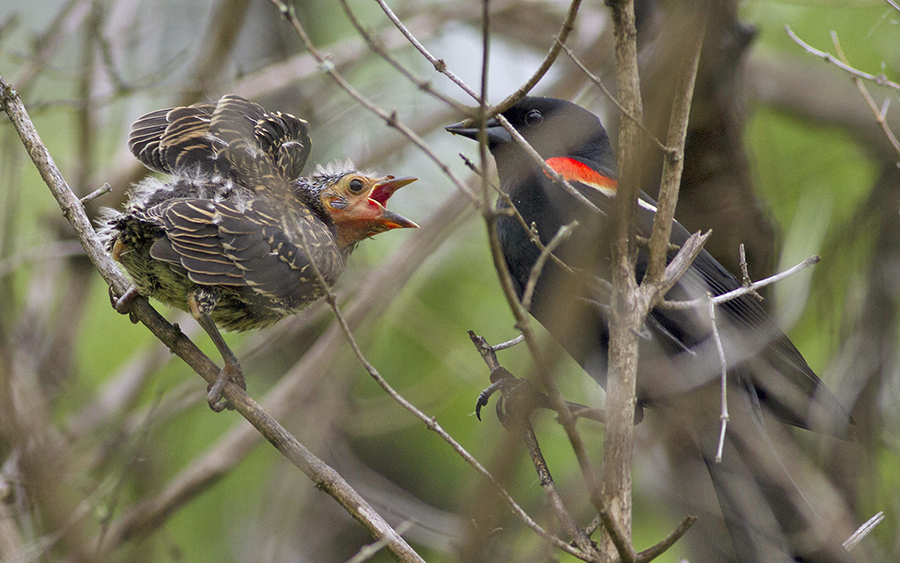 Red-winged blackbirds are raising their young around this time of year. PHOTO: Ann Brokelman

According to my son it was Alfred Lord Tennyson who once described nature as “red in tooth and claw,” referring to the savage and merciless conflict of surviving in the wild. Though I admit it may not be as poetic, in my humble opinion, Tennyson should have added that nature was “red in tooth, claw, and WING.”

What on earth am I talking about? The other day I was taking a walk through a park when ‘Wham!’ – I was hit on the back of the head.

I thought at first that maybe I’d been hit by a tennis ball thrown by a little hooligan, but just a few moments later I was hit again. What was going on?

As I turned in circles I noticed movement in the nearby cattails – a flash of black and red wings – and then I was making a very quick exit from the area. I was bonked one more time before I moved far enough away from the hidden nest of a very irritated red-winged black bird (Agelaius phoeniceus).

Though the back of my head was bruised, I still smiled at the tenacity of this tough little bird. I have seen these little guys (about the size of a robin) attack red-tailed hawks, relentlessly striking them until they leave the area. I really think the city should put up signs that say “Beware of Red-Winged Blackbirds.”

If you’re walking at Ashbridges Bay, take a look among the cattail stalks and see if you can spot the birds. You can usually identify them quickly … they are the black birds with, as you might expect, a lot of red on their wings. Please heed this warning: if the fledglings (baby birds taking their first flight) are actively trying to leave the nest, both parents will aggressively make sure you don’t get too close.

Nests are found close to the water among the reeds and cattails. You probably won’t even know the fledging red-winged babies are there until you’re under attack. I never intentionally get too close, but sometimes the birds nest within metres of a walking trail. If I’m ever hit I move away quickly and try to spot the nest from a distance. Look for the babies hanging onto the cattails or nearby small branches. They should be constantly calling for their parents to bring them food. Red-winged blackbirds make a throaty check noise as well as a high slurred terr-eeee whistle.

If you’ve ever seen a big bird of prey such as a red-tailed hawk, crow or turkey vulture in the sky being followed and attacked by a small black bird, chances are it is a red-winged blackbird doing the chasing.  I’ve even watched a pair of swans come too close to a blackbird’s nest and get hit repeatedly on the head and back. Please watch them and admire their devotion to their chicks, but never antagonize them on purpose. We often forget how stressful our presence must be.

Have you been attacked by the red-winged blackbirds? Do you have any interesting wildlife or bird activity at your home? Please email and tell me about it: abrokelman@gmail.com.