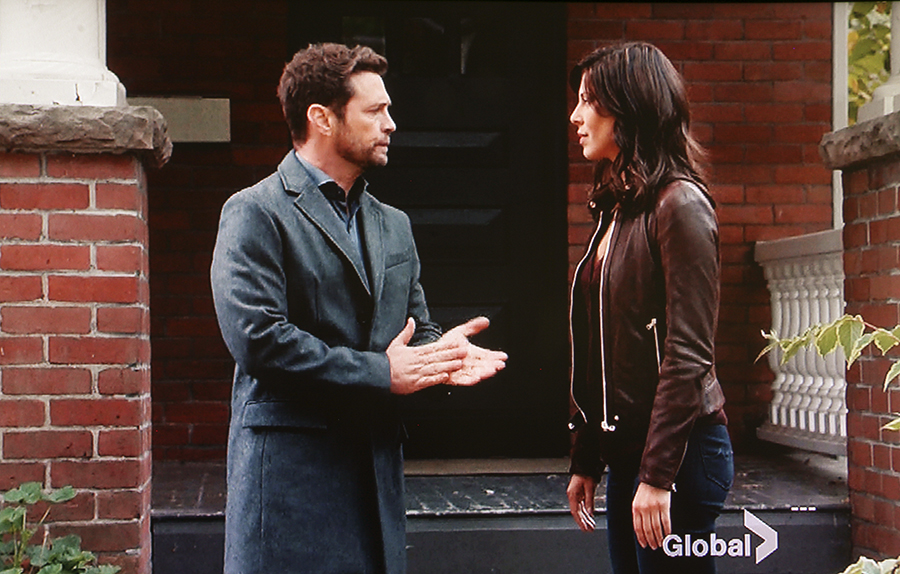 Matt Shade (Jason Priestley), left, and Angie Everett (Cindy Sampson) in the Beach on Balsam Avenue, in a scene from the show ‘Private Eyes.’

If you are watching Private Eyes (Thursday nights on Global), you may recognize the leafy streets of the Beach.  Jason Priestley stars as Matt Shade, a former pro hockey player who has lost all his money, but lives in one of those beautiful homes with the wrap-around balcony we all dream about. The vintage silver Porsche in the Balsam Avenue driveway is pretty special, too.

This popular summer series has Shade turning private investigator with boss/partner Angie Everett (Cindy Sampson) in solving crimes around Toronto. Shade is no Sherlock Holmes, but he gets by on his charm – or so he thinks. If the premise seems familiar, the show entertains with all the usual witty banter, bickering and romantic tension of the genre (see: Castle, Republic of Doyle, Moonlighting).

The show doesn’t present a generic big city. This is the Toronto we know. Watch for the recurring motif of streetcars rolling along Queen Street East.

There is even a Maple Leaf joke and a cameo from Doug Gilmour.

Priestley told Global News, “We’re shooting Toronto for Toronto which is great. It’s a very international, multicultural, vibrant city. So why not celebrate it?”

Each episode features a different side of the city or a unique place like the Toronto Islands, but always comes back to Shade’s stately Beach home or the P.I. office on Queen Street East in Leslieville.

Location managers can turn a lovely place into a sinister horror on shows like American Gothic, Hannibal or the new film It. While Toronto looks glamorous and bright in Private Eyes, director/producer Guillermo del Toro needed “dark, isolated, haunted and terrifying” for the vampire virus TV series The Strain that recently filmed scenes on Eastern Avenue and at Ashbridges Bay (where zombies chased Sarah Polley and a boat blew up in 2004’s Dawn of the Dead remake).

Television production is booming in Toronto thanks to our low dollar, tax credits, abundant studio space, experienced local crews and talented actors as well as diverse locations like the Scarborough Bluffs, where Gangland Undercover has been filming with Beach resident Melanie Scrofano (who also stars as Wyonna Earp out west). Who has time to watch all these TV series?

Taken is a TV prequel to the Liam Neeson movie franchise about an ex-spy with “a very particular set of skills.” There is one famous “spy” living in our midst. Shhh! Don’t tell anyone, we wouldn’t want to give away his identity, but a certain “Bourne”-again actor has been living quietly on one of those lovely Beach streets with a tree name. “How do you like them apples?” (Jason Bourne opens July 29.) He’s been here shooting Downsizing for the last couple of months, but forget his name, you didn’t hear it from me. They may be watching us!

Are you a smooth talker? Do you have what it takes to be a P.I.? A Jim Rockford or a Jessica Fletcher? Take the tongue-in-cheek Private Eyes quiz. Here’s a sample question:

What year is Shades Porsche

Shade (Jason Priestley) drives a vintage 1969 Porsche 911S on the series which was filmed mostly in the east end of Toronto. One episode was all about the Beach area with a few “Beach” jokes thrown in for laughs: “How can you not love the Beach?” And yes, that probably was somewhere in Scarborough that Darren saw whizzing by in the background in one episode .

Where is the diner located that Shades father works at? It reminds me of The Goof at at Queen and Lee.

The “Red Bird” diner in Private Eyes is actually Sauvignon on Queen St. E. at Rainsford. Sorry I didn’t see your letter sooner.

The Goof is at Queen and Beech Ave.

What kind of car does Angie drive?