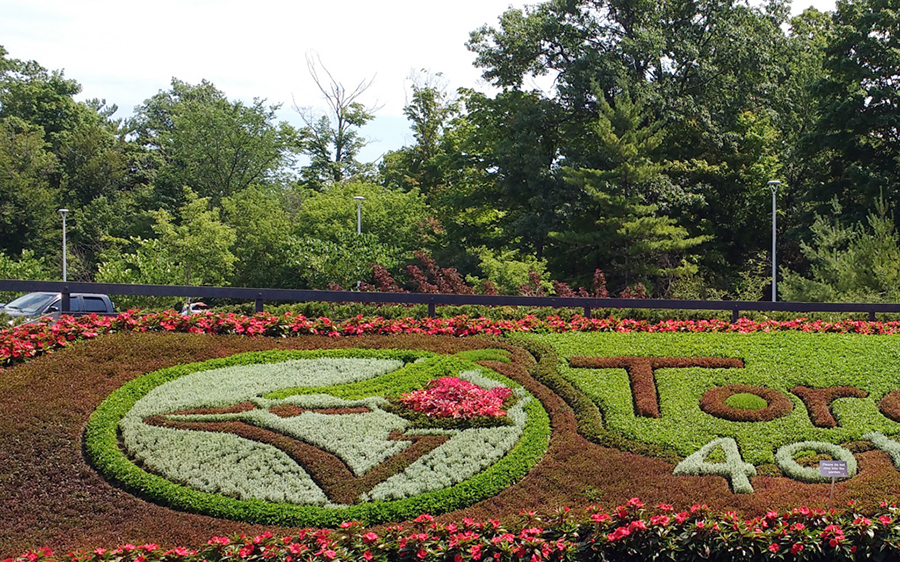 When I lived on Lee Avenue in the late seventies and eighties there was a unique piece of art on display in Kew Gardens. But this type of art in the park wasn’t of the usual wood carving, sculpture or painting variety.

Back in the days when you could buy your socks and underwear at the local Woolworth and a gardener actually lived in the gardener’s cottage, there was a large carpetbed display located at the north side of Kew Gardens near Queen Street. It was a work of art when it was in its prime, and an attraction that caused more than a few tourists, locals and even the occasional streetcar rider to shout, “Wow, look at that!”

So what the heck is a carpetbed and where did they come from?

Simply put, they are mass plantings of low-growing or dwarf cultivars of santolina, althernanthera and sometimes varieties of succulents that are organized into complex geometric designs and patterns. Newer versions feature themes, lettering and pictures which are meticulously trimmed and cut to create the effect of a carpet woven with plants.

Drawing designs with plants is not exactly new. The well-manicured gardening style of the Italian Renaissance and the expansive parterre de broderie backyard of the palace of Versailles were both inspired by the Islamic version of paradise found in the patterns of Persian carpets.

But it was in 19th century England during the Victorian gardening frenzy that carpetbedding really reached the height of its popularity. Cities and towns throughout the country competed with each other to see who could create the most elaborate displays, and nothing was off limits. The parks were like a Disneyland for the Victorians and the carpetbed centrepiece was their magic kingdom.

Of course, the sometimes garish and overly flamboyant style that evolved wasn’t everyone’s cup of tea. One particularly venomous critic with an imaginative way with words described them as “a vulgar display of Victorian foppery that would cauterize the eye of the beholder.”

Even with the criticism, the carpet gardening style continued to flourish and made its way across the Atlantic to parks all over North America – and eventually here in the Beach.

Unfortunately, the Kew carpetbed gradually fell into decline over the last 10 or 15 years and the original circular structure just became a holding pen for a variety of run-of-the-mill annuals. I had always hoped for a resurrection but that’s probably about as likely as roaming the creaky wooden aisles of the Beach Woolworth again. The last remnants of what remained of the original carpetbed’s flagstone frame was carted off in the back of a dump truck during the renovations to the park entrance this year.

The Kew bed might be gone but there are still a few examples of these curiosities around town. There are two large carpetbeds at the entrance to Edwards Gardens in North York, one of which depicts the CN tower and seven foot Blue Jays logo to celebrate their fortieth anniversaries. The beds may not qualify as a “vulgar display of Victorian foppery,” but if you stand there long enough you might hear a visitor shout, “Wow, look at that!”