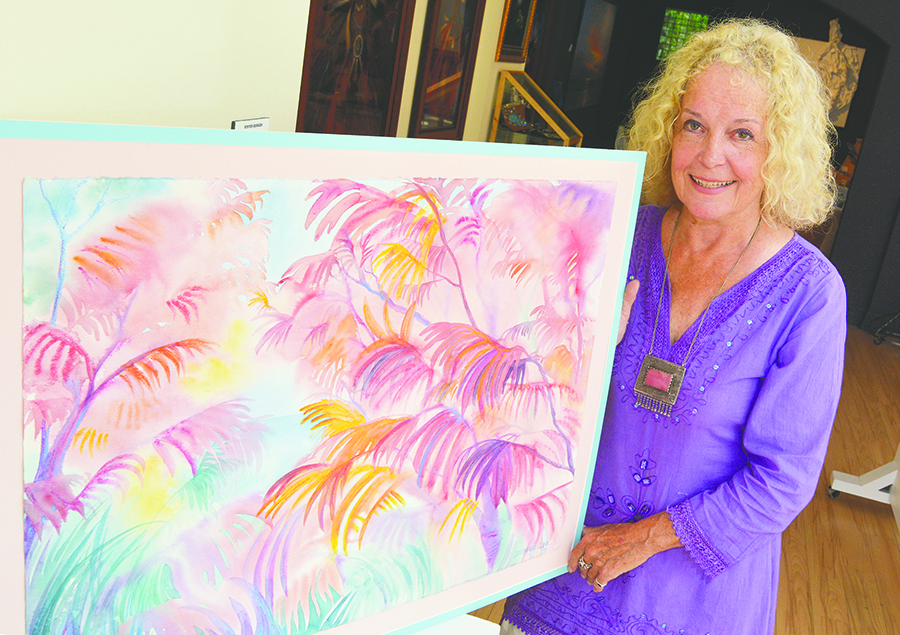 The Beach has lost one of its brightest artistic stars. Jennifer Cline, known as much for her technically proficient watercolours as her omnipresence on Queen Street with her fiery red hair and trusty bicycle, passed away peacefully on July 27 after a six-month battle with brain cancer.

Cline is well-known to long-time Beach residents, artists and art lovers, having painted her much-beloved neighbourhood for decades. She was a founding member of the Beach Guild of Fine Art, alongside Wynona Gallop, Shirley Jones, Mary Cserepy, the late William Taylor, Carolyn Pack, and Janice Gibbins. Both solo and with the Guild, Cline exhibited her work in numerous galleries, including many shows at the Beacher Café and 15 years as part of the Beach Studio Tour.

Valerie Cline, Jennifer’s niece, said her aunt symbolized the neighbourhood she loved and lived in for more than three decades.

Jennifer treasured the trees, parks, architecture and character of the Beach, said Valerie.

“I know she really passionately wanted to preserve that,” she said.

“The Jazz festival, the shops, the markets, the people – she was just so passionate about all of it, and connected to all of it … In many ways she was sort of a documentarian.”

Cline painted many of the shops along Queen Street over almost 40 years, building a legacy of images of that very character she treasured, and her art has in many cases outlasted the businesses she painted.

Along with Queen Street and the Jazz Festival, her floral and historical paintings are equally treasured records of the past. She has been commissioned to commemorate significant anniversaries at the Balmy Beach Club and Community Centre 55, and was generous with contributing her work to local causes.

Cline trained at the Ontario College of Art on a scholarship from the Eagle Pencil Company, one of only two ever given out. She worked as a commercial artist for companies such as the Cockfield Brown Agency, Eaton’s and The Bay, where she honed the technical proficiency some might not even know she had.

Valerie said sorting through her aunt’s old work, some dating from as far back as her high school years, was something of a revelation, revealing a mastery of everything from catalogue and fashion work to architectural drawing and even caricatures.

“Her ability to naturally capture perspective and proportion just blew me away,” said Valerie, and her caricatures were “as good as the best newspaper political caricatures that you see today.”

When Cline gave up commercial work for fine art, business became something of a lower priority, and she often donated her time and talents, said Valerie.

“Her priority was purpose and passion,” she said. “She really did have a great heart when it came to helping a cause.”

The Beach was not just Jennifer’s home, it was also her muse, said Valerie. In a 2014 interview with Beach Metro News marking the Guild’s 20th anniversary, Jennifer stated as much. After discussing all the spots she’s painted around the world – Greece, England, Colombia, France – she said she still always returns to her favourite place to paint: home.

“That expanse of sea and sky at the end of the street, where else do you get that in Toronto?” she asked.

A private ceremony has taken place, but Valerie is hoping to organize a chance for Beachers to celebrate Jennifer’s life. Email her at valerie.cline@gmail.com to share condolences and to stay informed on memorial plans.

So sad to hear of the passing of my good friend Jennifer Cline. She was one of the first artists I knew when I joined Beach Metro News, and remained a constant friend and helpful link to the thriving Beach arts scene for the 15 years I was there. She will be sorely missed by, not only me, by the legions of Beach arts fans that knew her.

I m so sorry to hear of her passing away. My best wishes to her family for their loss.

Jennifer was very active in fighting some of the bad developments that we have had in recent years and attended many meetings and she even testified at the OMB. She also put her artistic talents to work in these causes. She was also involved in heritage. She was soft spoken, but loved our community and she will be missed.

There have been no “bad” developments per se. You may consider some “bad” (I expect that a fossil lie you would consider any development bad), but that is just you opinion!

We are talking about the passing of Jennifer Cline and you politicize with a nitwit comment.

I arrived at Seagulls to learn of Jennifer’s passing. I am so happy to have met her and to praise her lovely art and ability to capture the essence of my beloved Beaches. I am surrounded by her lovely watercolours and will continue to cherish them always.

We use to rip up the dance floor at the el mocombo.

This news is sad.