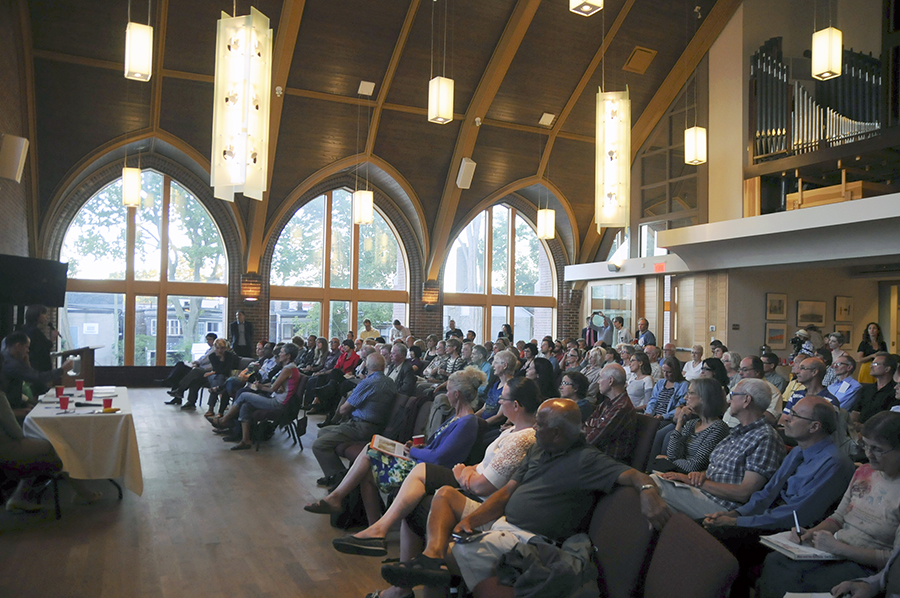 A large crowd turned out to the Beach United Church September 14 for a town hall on climate change. PHOTO: Anna Killen

If you walked past the Beach United Church around 6:30 p.m. last Wednesday night, you were likely handed a flyer by one of several East End groups shoring up support for their various causes.

The Keep Hydro Public contingent was energized, standing side-by-side with people who want to close the Pickering nuclear station, those looking to shut down Enbridge’s Line 9, and others who want stricter idling laws.

By 7 p.m., the groups had settled in upstairs inside the church – joining animal rights activists, those against Nestle and the price the company pays for Ontario water, and other engaged citizens – for a climate change town hall. About 200 people attended the meeting.

Organized by Beaches-East York politicians and moderated by MP Nathaniel Erskine-Smith, the event’s intention was to gather forward-thinking ideas and spread information about what government, business, and individuals can do to tackle climate change – together.

Rowley offered a variety of ways individuals could lessen their carbon footprint, including changing modes of transportation, better insulating and building our homes, and buying local and wasting less food.

She said more attention will have to be paid to storm water management (“As anyone who lives south of Queen East knows,” she said) and emergency preparedness options will need to be updated as more climate change effects begin to take hold. A local network with heating and cooling shelters, for extreme weather, should also be adopted.

Heaps, who keeps an eye on the corporate approach to climate change, noted that the source of human greenhouse gas emissions could be summed up with three C’s: coal, cars, and cows.

He said that corporate approach to climate change can be likened to a saying about Wayne Gretzky: “A good business will skate to where the puck is going to be.”

Cows and industrial meat processing received a lot of attention at the meeting, with Erskine-Smith noting that on the federal government’s website, it fails to mention that eating less meat is a viable way for an individual to contribute to climate change reduction.

The line of the evening, in terms of audience reaction, went to Langer from the Toronto Atmospheric Fund, who opened her remarks by saying, first of all, as humans and government, “we have to stop doing stupid things.”

Conservation is cheaper and more effective, she said, noting that the leadership and commitment to good climate policy appears to be there, “we just have to bear down.”

Just interested in hearing from fellow beachers, how does everyone feel about Justin Trudeau and the federal liberals adopting Stephen Harper’s climate change targets?