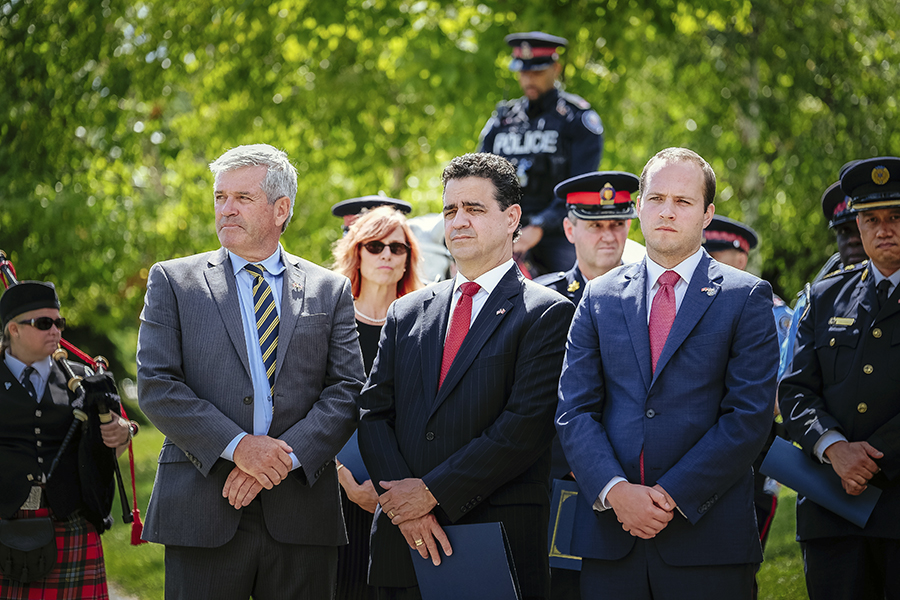 Historically, 9/11 is an integral part of history and the lives lost that day in 2001 deserve to be remembered.

To that end, the Beach hosts a ceremony at Millennium Gardens, located at the southeast corner of Eastern and Coxwell Avenues each year. But how and why did this event get started and how has it changed throughout the years?

First, let’s start with the history of Millennium Gardens, where the ceremony is held each year.

The gardens were a project implemented for the millennium year 2000, focused on peace for the youth of the world and the people of the Beach area.

Glenn Cochrane, Pat Foster, Bob Murdoch, Ivor Vavasour, and myself – representing Community Centre 55, The Beaches Lions Club, and the City of Toronto – worked on the project. The group found a spot at the corner of Eastern and Coxwell Avenues, and financed the gardens by asking people in the Beach to donate – in return, they would have their names inscribed on a four- by three-foot granite monument at the site.

On top of the monument is an inscription by prominent Beacher George Sloan:

Here was nurtured the garden of dreams, respect and excellence we call Canada

Tend it well, enjoy its bounty

Pass it on more beautiful than when first you came”

Under this inscription are the names of all the people who donated to this worthwhile cause.

A flagpole with flags representing Canada, Ontario, Toronto, and Community Centre 55 is at the site, along with a little garden and several places for people to sit down.

In the middle we have the Millennium Solar Clock – which actually shows the correct time – donated to the people of the Beach by the Leistner family, a long-time charitable Beach family.

But after the garden was built, what to do with it?

We wanted to pay tribute to people who helped the Beach and East Toronto area through good work and charity. The Beach Citizen of the Year ceremony was the first event held at the gardens, and continues to this day.

Then, in the year 2001 on Tuesday, Sept. 11, the world as we knew it changed. Millions of people watched with horror as four planes smashed into the World Trade Centre, the Pentagon, and a lonely road. This was a tragedy that shook the entire world.

In the East End, we put together meetings while students, parishioners and residents signed memorial scrolls proclaiming our solidarity with the people who died in the attacks.

In the following years, an idea was formulated by Community Centre 55 and community leaders to use the gardens as a way to remember the 9/11 events in a ceremony each year – we wanted to make sure our country and the world would remember in a most dignified manner.

At the first ceremony, Bob Murdoch gave the welcome, I said the introduction, Amy Gaudar sang the American and Canadian anthems, and Sarah Severn performed the prayer “Amazing Grace”.

Over the years, we weren’t always sure if we should continue – many other cities and areas stopped their ceremonies — but the Beach persevered with the help of different organizations and the city, as well as law enforcement and first responders.

Representatives from the American consulate and various places of worship also participated over the years, honouring those who had fallen. It wasn’t just Americans who perished – many people from different countries, including Canada, were victims of the attacks.

As I watched the ceremony, I was taken aback with feelings of great respect watching the different people who were laying flowers as a tribute – particularly as I watched the young police service constables, standing up smartly and saluting in memory of their counterparts. I was very proud of these young men and women and others who represented all that is good in this world.  Let us not forget – maybe one day there will be peace in our time and in our world.

Gene Domagala is leading a walk on the highlights of Kingston Road on October 1, 2016. Meet at St. John’s Catholic Church at 1 p.m.

Considering the continuity of this event and the fact it may be the only 9/11 continuous community based Remembrance in the City of Toronto and understanding its importance, it seems to me that Gene Domagala should be given a piece of one of the World Trade Centre to put in the Millennium Garden as a sculpture and fitting tribute to the purpose of the ceremony. The US Consulate may be able to facilitate the process.

If this should occur, I would be happy to begin the fundraising process to have a small authentic piece of the tower embedded in black granite.

Gene should be congratulated for his tenacity of purpose in keeping this important event alive and in the minds of all of us.