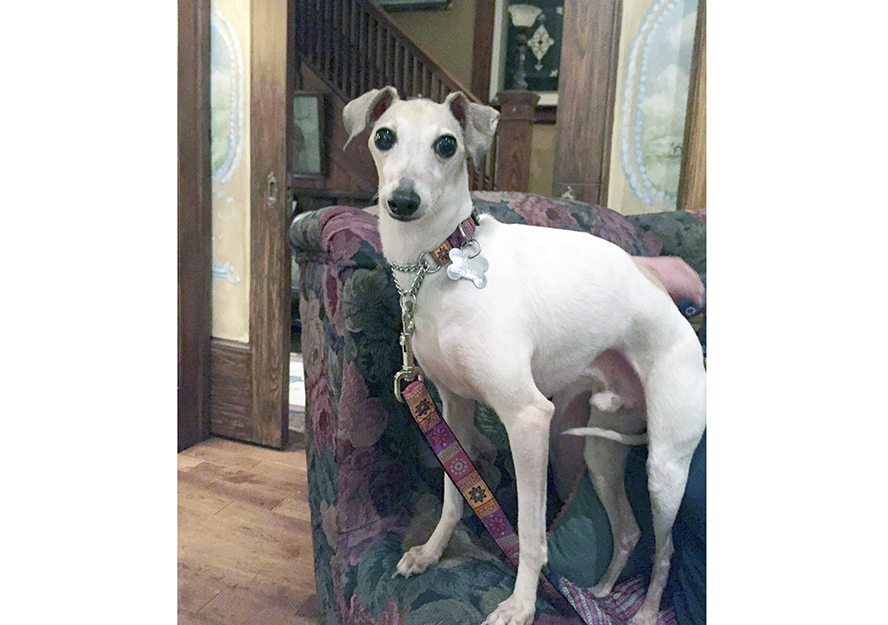 Archer may share his name with “the world’s most dangerous spy” from that naughty animated series on FX, but that’s where the similarities end. He’d be more of a gentlemen’s spy – if he were a spy at all – a “007” type. (He likes his water poured, not stirred.) I’m also guessing he’d much rather be flirting with a pretty lady than pursuing bad guys. You see, Archer is a bit of a skirt chaser…quite literally, in fact. Any port in a storm! Besides thunder and lightning sending him running for cover, there’s also his shadow and whatever lies beyond his shadow. At least that’s the case for the time-being, so a career in espionage may need to be put on hold.

While he might not be spy material just yet, Archer is definitely a man of mystery. The roughly 4-year-old Italian Greyhound came into Toronto Animal Services as a stray over the summer. His quirky, yet sophisticated breed is known for emotional sensitivity to stress and change. Winding up in a shelter was beyond terrifying for him. Imagine a porcelain statue frozen in fear, except for those footloose and fancy-free times spent in the exercise yard with an equally mysterious lady. She was a princess masquerading as a Shih-Tzu who’d been found dumped in a composter. You know how sharing a traumatic experience can bring strangers together? Archer and the princess were inseparable. So when Carol from Happy Tails Rescue (“HTR”) came to fetch the Shih-Tzu after the staff called about her, they simply had to mention her new best friend. “Put him in my car,” she sighed. It could have been worse. The last time she recalls saying anything like that, she went home with nine Chihuahuas.

When the would-be secret agent and his girlfriend arrived at their new foster home with Carol, adventure and intrigue surprisingly pulled them in different directions. It was like the first day of school. By the end of the day, they had picked new BFFs. Our little princess chose her social circle wisely, while Archer took a walk on the wild side. Perhaps he was still hoping to live up to the image of a dangerous spy. His minions of mischief include Bubba, a permanent foster boy with a long list of misdemeanors despite a bad heart, and an open-to-anything-against-the-law puppy named Bruce.

Bubba and Bruce are doing all they can to convince Archer to stay on the dark side for all eternity no matter how much he fears shadows. What could be more exhilarating than re-arranging Carol’s shoe closet on a daily basis, decorating the house with shredded paper from the waste basket, or rolling dog bowls down the stairs? For now, Archer is merely taking notes. He might just be too refined for such shenanigans but, being a Greyhound, he’s never opposed to running laps around the backyard at break-neck speed with the ever-ready battery that is Bruce. And while Bruce may be trying to teach him the joys of barking ­­– even if his own first-grader bark sounds more like a burp – Archer is once again far too sophisticated for the primitive activities of the common canine. Although he did scream during that thunderstorm I mentioned earlier wherein he ended up under Carol’s skirt, but he doesn’t talk about that.

Even if he occasionally fantasizes about it, sweet gentle Archer could never be as boorish as Bubba and Bruce. He’s a Royal, through and through, and Carol intends to accentuate the positive! Social excursions are a must to get him more comfortable around us lowly peasants. So far, they’ve been to the Aberfoyle Antique Market together and recently they took a jaunt to the Garden Centre to pick out plants for the fall. Carol says she feels classy in his company as he has a habit of drawing in the crowds with his regal mannerisms and graceful form. Slowly but surely, he’s warming up to the idea of being adored by an ever-growing fan base.

During our interview, Archer stuck to Carol’s lap for plentiful bum rubs and regular assurances the stranger with the camera wouldn’t touch and therefore contaminate him. I got the judgmental stare initially but over time, he relaxed and even decided I was worthy of his best pose for picture-taking. Of course, he refuses to show his teeth when smiling. There are only two left after 42 rotten ones needed to be removed. It’s a fairly common issue with Italian Greyhounds unfortunately, no matter the degree of effort to keep them tartar-free. Regardless of his practically toothless grin, there is no denying his classic beauty.

Sitting across from the prince who would be king, the ideal career path for little Sir Archer suddenly came to mind. An international spy is way below his pay grade. But with a little time and patience, Ruler of your Heart would suit him perfectly.

Archer is a roughly 4-year-old male, neutered & noble Italian Greyhound currently worshipped by his loyal servants at Happy Tails Rescue, www.happytailsrescue.ca, carol@happytailsrescue.ca. Accommodations at the Rescue are adequate according to Prince Archer but he’s holding out for his very own palazzo complete with an outdoor race track when the need for speed arises and a lap of luxury upon which to perch when the need for cuddles fit for a king completes each day.