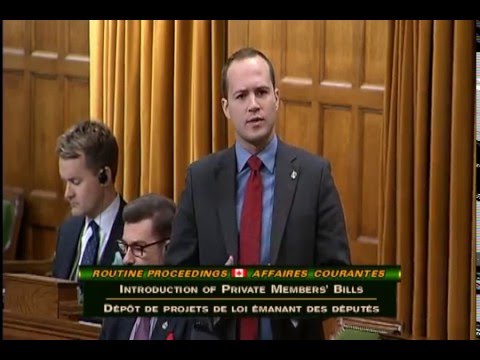 Beaches-East York MP Nathaniel Erskine-Smith has been gaining a reputation as something of an outlier in his Liberal party, thanks to the number of times he has voted against government-sponsored bills over the past year.

But when it comes to the rookie MP’s private members’ bill, which proposes changes to Canada’s animal laws, Erskine-Smith wants to be anything but an outlier. He’s pushing his party to give him the official nod of support before it comes up for vote next Wednesday, Oct. 5, and in the meantime has been garnering support for the bill across the aisle as a result of changes he’s made to the bill.

“Canadians across the country, whether you’re a Liberal, a Conservative, a member of the NDP, it doesn’t matter — Canadians care about animal welfare, whether you’re a farmer or a pet owner,” said Erskine-Smith. “I wanted to make sure that it would get buy in and I could tell that the way it was drafted initially it was going to be a little bit more divisive.”

Bill C-246, Modernizing Animal Protections Act, will have its second hour of debate in the House of Commons tomorrow, Wednesday, Sept. 28 before the house votes on whether to send it to committee on October 5. Only five per cent of private members’ bills become law, but Erskine-Smith believes his bill has enough bipartisan support to have a solid shot – even without the government endorsement.

“If government comes on board it will definitely pass, if government doesn’t come on board it might still pass – and this vote is just to get it to committee,” said Erskine-Smith on the phone from Ottawa last week.

After the bill was first introduced in February, it received a fair amount of backlash from anglers, hunters, and the agricultural community concerned about the bill’s language. There are three pieces to the bill: criminal code amendments on animal cruelty, the banning on the importation of shark fins, and requiring fur to be labeled along with banning of the sale of cat and dog fur.

“When I introduced it, hunters and anglers went nuts,” said Erskine-Smith. “It just became complete political perspective that it was going to affect hunting, angling and farming, which it won’t. No lawyer would say that it would.”

Nevertheless, fearing backlash, the government came out against the bill – forcing Erskine-Smith to “hustle” in order to build support inside – and outside – his party.

“It’s forced me to do a lot of legwork that I think is good early on just to establish relationships,” he said, noting that so far he has the support of NDP leader Tom Mulcair, Green Party leader Elizabeth May, and Conservative MP Michelle Rempel, among others.

“I am disappointed that there wasn’t more of a conversation to say let’s work together to try to change this to a form that we can all get behind,” said Erskine-Smith of the Liberals. “I’ve now done that legwork, I’ve consulted the agricultural sector throughout the summer and in the spring, I changed the bill to address those concerns, and I will be disappointed if the government doesn’t come on board now that I’ve made these changes.”

The changes address concerns about the language in the criminal code section – specifically concerning what Erskine-Smith calls a “symbolic” change that moved animals out of the section labeled ‘property’ and introducing a new offence for brutal and vicious killing, which critics said used untested language.

Now the three changes to the criminal code update a definition of bestiality to address a Supreme Court case from the spring, expand the definition of animal fighting to make it a crime to breed, train or transport animals for the purpose of fighting, and update the animal cruelty language to be consistent with other negligence offences in the criminal code.

“What’s currently in the code is willful neglect,” said Erskine-Smith, “which prosecutors say is really hard to prove that someone intended to neglect an animal.”

Erskine-Smith said he’s “confident in the changes that were made… In this current environment, it’s better to pass something and the bill is still significant in terms of what it proposes as a private members’ bill.”

After making his pitch to his colleagues tomorrow in Ottawa, he will be pitching his bill to Canadians via a Facebook Live “Ask Me Anything” event online at 8 p.m.

Keep up the great work!

Please, no more on this clown and his militant vegan agenda!