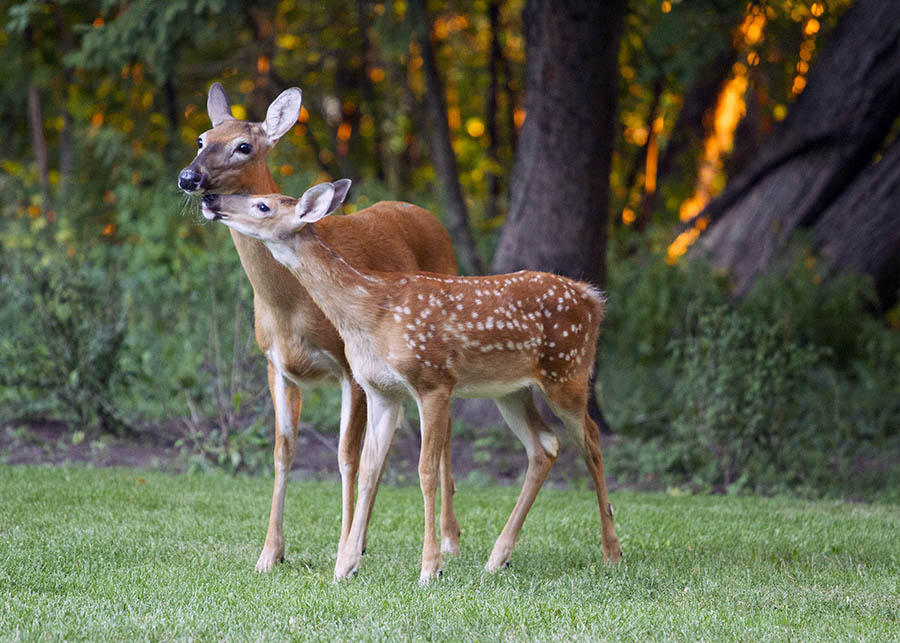 A fawn and doe enjoy a nuzzle on September 4. PHOTO: Ann Brokelman

What is it about spotting a deer that brings out such feelings of wonder and serenity? I’ll laugh at a chipmunk absurdly stuffing its mouth with food, or smile at a strikingly red cardinal on my bird feeder, but if I happen across a wild deer I might actually start to lose track of the world around me. Am I the only one this happens to?

I still remember the excitement of feeding deer in Algonquin Park as a young girl. People would park all over Hwy 60 hoping to see them and nobody questioned you for walking up and giving them bread. My parents have a video of me – a very black and white video – standing with a deer and claiming that it bit my finger.

I was excited to see them back then and I’m still excited about deer today. One special day a few moons ago, I saw not one deer, but four little Bambi’s and their mothers. I was with my friend Shirley. For many years, Shirley and her family have enjoyed the deer that regularly frequent her yard. After watching many videos of their encounters, I finally took her up on her offer to see them in person.

I had just taken a step out of my car when, barely a few metres in front of me, stood a set of twin fawns and their mother. They looked at me, I sat on my butt on the driveway, and we stared at each other for what felt like hours (but was likely only a few minutes). The sun was only just rising at this point and as I sat there I had an opportunity to watch a bit of animal kingdom parenting up close. The female was trying to get her fawns’ attention, and after they paid their mother little care she reared up and gave them a hoof to their hind ends. It seems that whether deer or human, sometimes our little ones need a swift kick in the butt.

Since that wonderful day I have been blessed with many more sightings of deer, often in our neighbourhood, and have tried to learn as much as I can about their behaviour and body language.

Did you know that deer will stomp their front hooves to indicate seniority? I first witnessed this when I saw a young fawn stomping its front hoof to tell an approaching fawn and doe that she was higher on the food eating chain and claimed first dibs on the salt lick left out for them.

On September 25 I watched an eight-point buck try to come into a yard occupied by the doe and fawns. The female deer wanted nothing to do with him and chased him away four times.

What has it meant to see a family of deer in the Beach and bluffs? Nature is still here in our city – and I am so lucky to be able to enjoy watching them.

The deer only come into public view for half an hour, then back to the bluffs. Every minute with them is a moment to remember.