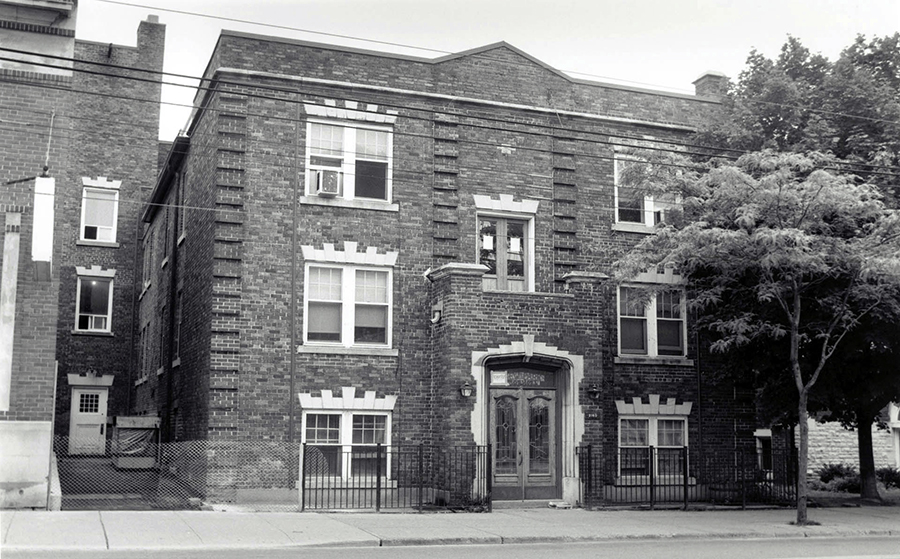 We’ve recently been celebrating the 100th anniversary of the Beaches Public Library with talks and tours of the historic building and neighbourhood around it. Phillip H. Carter spoke about the history and architecture of the Beaches library on October 12. Librarian, historian, and Beach resident Barbara Myrvold, in concert with the Beach and East Toronto Historical Society and the Toronto Public Library, gave a fantastic presentation – one of the best we have witnessed at the library – on the architects and architecture of the various houses and buildings in the Beach area.

Barb noted Beach architects such as C.J. Wagner, E.R. Babington, and Archibald Stringer, giving the audience a brief history of their lives and a welcome learning experience on the different types of architecture and different homes that make up our neighbourhood. Apartments were also highlighted, giving me an idea. Why not write about the different apartments in the Beach?

Not being much of an architect, I thought I would write a bit about the apartments and ask my learned readers what are their favourite apartments, and why? In the Beach from Fallingbrook to Coxwell there are at least 100 apartments along Queen Street. Some of them were built a little more than a century ago, and some of them are being built as I write this column.

These apartments range from four units to 28 units, with some three stories and others six stories plus – depending on your interpretation. The exteriors are made of brick, stucco, cement, and come in a variety of colours – red, orange, white, even grey (some of the older ones have a subdued colour to them, owing to the elements). Remember, dear readers, their presumed attractiveness is in “the eye of the beholder”, or in your case, “the eye of the Beacher.”

Some of the apartments do not have names, only addresses, but for this tour, which for the most part will move west along Queen Street East from Fallingbrook to Coxwell (bear with me if I jump around a touch) we will be concerned only with the ones that are named. Note the different names on the apartments, they signify the area. Some are peculiar – maybe you can tell me about them and your own history with Beach apartments.

As we move along, I want you to look at these apartments from the bottom up – look at the main door, look at the windows, look at the roof. Are there any outstanding features? Is there an unusual architectural design? You’ll note that most of these apartments, especially those built in the 1920’s and early 1930’s do not have an elevator, they are walk-ups – you have to walk up the stairs to get to your residence. The newer apartments and condos do have elevators. But today we are concerned with the exterior of the building – not the interior.

Beginning at Fallingbrook on a quiet morning or afternoon, look around and notice the gentle rolling hills of Queen Street – one doesn’t see that during rush hour. Then, take a look at the buildings around you, each has its own story and type of architecture.

On the north, see the “Verdun Apartments”, named for Canada’s part in World War I. Look at the south side and see the site of Sir Henry Pellatt’s country home.

Travel to the Fox Theatre and notice one of the first apartment buildings in the area, the Prince Edward, built around 1914.

On the south side, at 2395 Queen Street East are the Victoria Gardens Apartments, circa 1928, one of many apartments built in that era.

At Lee Avenue we have Kew Mansions – one of my favourites – before heading west towards Hambly. The apartment on the corner, built around 1914, was the site of our first library. Going along to where Bellefair Church was located, the front of the church is there, but the condos are in the back of the original church. Sometimes I think, “Well, at least they kept some part of our history.”

At the southeast corner of Woodbine and Queen, the Williamson Block, again one of our first apartments on the north side, and another one of my favourites.

A task for you, dear readers. Choose your own special apartment or condo building, look them over, and let me know your memories, or their faults, or why you think a certain apartment is the best.

Apartments in the Beach

Queen Street East, along the south side of the street

Queen Street East, along the north side of the street

I would like to know more about the apartment building between Glenfern and the beach just east of Silverbirch. Interesting it is all on its own but I can’t find anything on the internet.

Just to clarify, I mean the building that is right on the beach. Would appreciate any historical info or recollections. Thank you.

Do you keep historic record on who rented these apartments? Possibly in December 1965?

Diane, City Directories can be viewed at the Toronto Reference Library or (up to 1969) accessed at the Toronto Public Library website at https://www.torontopubliclibrary.ca/history-genealogy/lh-digital-city-directories.jsp. (Note the files are huge and may take a while to download.)