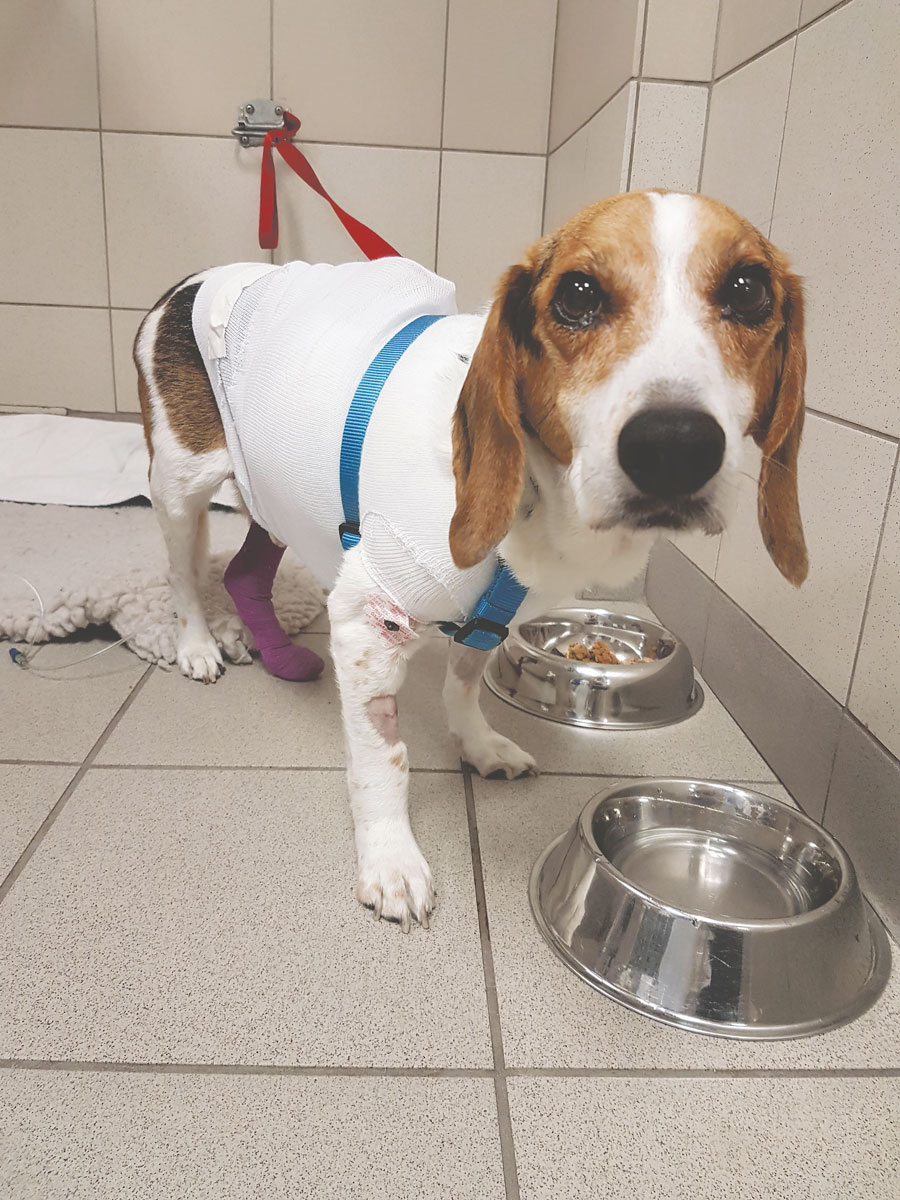 We named the guy in the body bandage “Algernon”. Those more cultured than myself might have assumed we named him after the classic novel “Flowers for Algernon”. But I do most of the dog-naming for our little beagle repair shop and, being a product of the ‘80s, I was thinking more about former manager of the Sex Pistols, Malcolm Mclaren, and his upbeat ditty, “Algernon’s Simply Awfully Good at Algebra”. Little did I know how fitting the name would turn out to be considering a particular line in that song, “If you want to know how much you owe, he’ll tell you like a shot.”

Allow me to explain because this is more than just your garden variety Pet of the Month article. It’s also a Guide on How to Get Out of the Proverbial Woods using (prepare yourselves for another ‘80s reference)…the “Power of Love”!

It was in early October, about a month before we host our 11th Annual Beagle Bash for Cash, when we got the email from a shelter in Ottawa. Preparations for our big fundraising event were underway at the time, our long-term-care beagles were doing well and we had just celebrated two adoptions back to back. It was all hoots and howls for the Big On Beagles (BOB) family! We should have known that wouldn’t last.

Algernon had come in as a stray. They estimated him at 10-years-old but stress can age a dog more than their years. So can health issues. He yelped when they examined him. The shelter’s vet thought maybe there might be a neurological issue. We never like to hear that word. Beagles are notorious for spinal cord injuries. And so we took a big gulp, braced ourselves, and brought him into our care.

From the start, Algernon wasn’t eating and that’s always reason to panic with a beagle. X-rays revealed the unexpected – although why I would never have expected that a beagle might have ingested something he shouldn’t have is beyond me. There was definitely something “foreign” imbedded in his stomach and intestines. An ultrasound gave us even more information. The uninvited guest was a lengthy cloth-like material that had ultimately perforated the intestines in several places. The situation was life-threatening. Algie needed emergency surgery by a specialist right away. But here’s the thing. This was a complicated procedure. The estimated cost was $8,000 and Algernon only had a 50 per cent chance of survival. One look at that face and the odds were good enough for us. Of course, the odds of surviving such financial ruin would be another thing entirely.

Here’s where the power of love flexed its muscles. Despite our upcoming fundraising event, we had no choice but to launch an emergency online fundraising appeal. This was going to take more funding than the event could yield.

Algernon made it through surgery but had to spend a week post-op in the ICU of the Veterinary Emergency Clinic downtown. We received daily status reports from the amazing medical staff. They all fell in love with their newest little patient, sending us heart-tugging pictures to use for our appeal. He looked perkier with each new picture sent, but that’s not to say those days and nights weren’t serious nail-biters for us. He was in the proverbial woods the entire time, with a heart rate too high and blood glucose levels too low, but with each passing day those things improved and he got closer to the exit of that dark gloomy forest.

While we were crossing our paws for Algernon and riding the highs and lows of those “pupdates” like a rollercoaster, we somehow raised close to $5,000! The donations poured in, coming not only from those wonderful benefactors we already know and love, but those we’ll likely never meet. There were folks out of Wisconsin, Maryland and other places across the border all sending their well wishes. And of course, there were fellow animal lovers lending their support on this side of the border stretching all the way to Ottawa.

That’s just how powerful love is.

Algie made it safely out of the Forest of Doom and is now in his foster home recuperating and learning the merits of eating actual food. And we’re back to focusing on preparations for our fundraising gala of the year.

I had the honour of providing overnight lodging to our million dollar baby the night he was released from hospital before heading to his foster home north of Kingston the next day. I told him he’d go down in BOB history as one of our biggest spenders. I also told him he was loved by too many people to count, even if he’s awfully good at algebra. That’s when he kissed me, several times. It was like flowers…from Algernon.

Algernon is a roughly 7- to 9-year-old miracle beagle enjoying life outside the proverbial woods at Big On Beagles Rescue (www.bigonbeagles.ca , facebook.com/BigonBeaglesRescue). On Algie’s behalf, we thank the incredible medical team at VEC for saving his life and every single person who made a donation to make that life saving possible. On behalf of the next big spender that makes their way to us, please join us for our 11th Annual Beagle Bash for Cash on November 6 at PawsWay from 1 to 3 p.m. which will be kicked off by a Special Group Reading brought to you by Psychic & Animal Communicator, Angel Morgan, from noon to 1 p.m. Contact us for party details and tickets for the Psychic Group Reading! *All well-mannered breeds and their humans are welcome