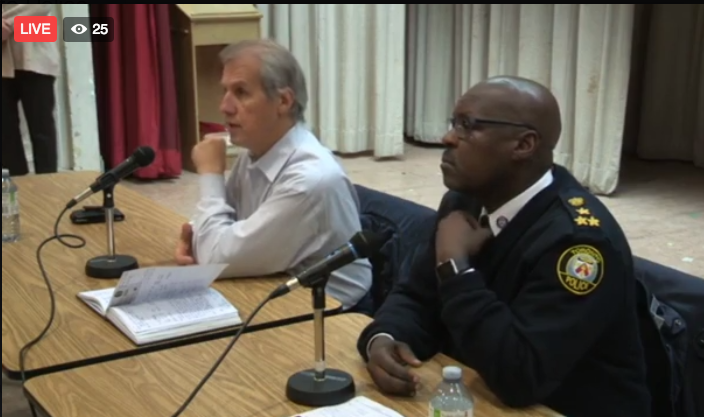 Two Toronto Police divisions that service the East End are merging into one — but officials say that won’t result in a change to the number of officers on patrol.

A community consultation hosted by the Toronto Police Service at Danforth Collegiate on October 26 considered plans to modernize the police force, plans which include the merger of 54 and 55 Divisions in an attempt to streamline services.

Currently, the force include 17 divisions. According to The Way Forward report, the interim report the community consultations are centered around, the new plan “will include fewer divisions, with boundaries that better align with Toronto’s 140 neighbourhoods and also with the planning and service boundaries of city departments, community-based organizations, and agencies.”

The report outlines 24 recommendations and is broken into five separate categories which include focusing on safe communities, primary to priority response, access to services, sustainability and affordability, and culture change.

Shifting from primary to priority response means officers will now spend less time on non-emergency calls and more time on calls in which a response is imminently needed.

The report assures the public that with this change comes more options for the public to report non-emergency situations, “including on-line, through smart devices, over-the-phone, by appointment at a police station, and by employing civilian members to follow up on certain non-emergency reports.”

Meaghan Gray, a spokesperson with the Toronto Police Service described the overall plan as “very neighbourhood-centric.”

While the specifics of the merger won’t be made public until December 31, Gray explained that merger of the 54 and 55 Divisions in particular is mainly focused on the amalgamation of their two buildings.

“Both [54 & 55 Division buildings] are considered to be in a general state of disrepair. So both buildings have physically outlived their usefulness. In many cases, we have made attempts to do repairs but we’re past the point of being able to make those changes any longer,” she said, adding that “from an efficiency perspective, we would be better off to come up with a new building that could accommodate both of those resources and those divisions.”

While they may be merging the two divisions, Gray said this would not mean a reduction in the number of frontline constables.

“The building itself is just that physical location where our officers go in to prepare for their day and in some cases the non-frontline officers go in to do their investigations. But the changing or the amalgamating of those physical buildings into one location is not going to have an effect on those frontline services. [Frontline officers] are out and about in the community and that’s where they’ll stay,” she said.

Jonathan Morrice, crime prevention officer in 55 Division and familiar face in the neighbourhood and on online groups, echoed this statement saying, “as far as I have been told, my position as Crime Prevention Officer will remain.”

Gray said specifics of the move have not been determined yet, but “the timeline [to secure and construct a new building] is roughly between now and 2020.”

Further details about the merger, as well as the new plan overall will be made available towards the end of the year.