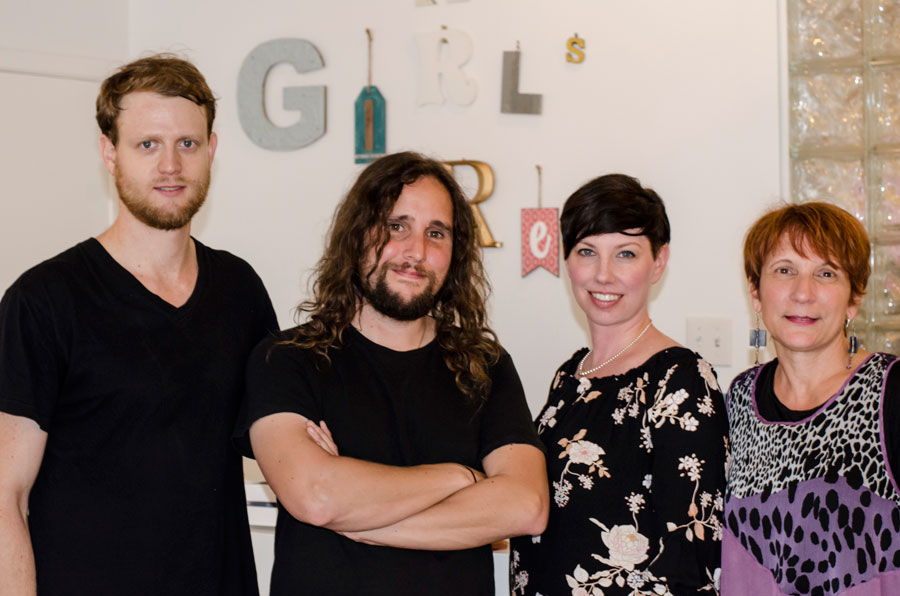 Walking into the cozy Girls Are space in the Upper Beach, it’s hard not to feel immediately comfortable.

The array of uniquely designed pillows and colourful items of clothing adorn the walls, drawing attention without being overly ostentatious.

Angela Loucks, the owner of Girls Are, moved into the space at the end of the summer, quickly working with the unit to make it her own. The space used to be home to music school Tuneology before it closed its doors in May.

Moving into the neighbourhood was lucky for Loucks – and families in the area – as it led to not only a clothing store for her, but a children’s hub comprised of Girls Are, the Children’s French Book Corner and music lessons by instructors Darren White and Kyle Sullivan (more on these businesses below).

For Loucks in particular, being able to own a clothing store was a dream. It was a long road to get there though.

“I kind of did things backwards,” said Loucks. “I had my kids a little bit younger than some people do now and then I went back to school and now I’m doing what I really want to do.”

But being a full-time mom to two little girls didn’t stop her from pursuing her dream. Loucks successfully graduated in 2010 from the Fashion Merchandising program at George Brown College and credits her daughters as being her inspiration for the store.

“Having two young girls and really not having great places to go to find unique things for them [was tough],” she said. So Loucks took it upon herself to fill that gap.

Her daughters, she said, “are now 12 and 14 and they’re both extremely different. One is very athletic and very sociable and then my other girl is a little bit more introverted. More into art and reading and music. And so they’ve been a huge help in helping me pick things for the store.”

And having two daughters, Loucks knows first-hand how important it is to build their confidence and ensure that their clothes reflect their true personalities.

She doesn’t stop at her clothing and accessories either. Loucks wants to build the confidence of girls from the inside out, which is why she also runs workshops for girls of all ages.

The workshops can be anything from movement flow classes that focus on helping teens deal with stress to writing workshop that are based on boosting beauty and body image.

Most importantly though, Loucks wants to ensure that girls today feel confident and empowered regardless of their interests, clothing or appearance.

“Different can be beautiful too.”

Tucked away in a small corner of the Girls Are space is Lynda Grimard-Watt’s store, the Children’s French Book Corner.

Grimard-Watt was previously at the Simple Craft Company (see story Page 23) but moved into the Girls Are space in mid-September. Noticing the empty nook toward the back of the store, she had inquired with Loucks if it was available. And the rest, as they say, is history.

She may hold only a small space but Grimard-Watt believes her corner serves a much larger purpose.

“It’s very difficult to get [a] French book in person in Toronto,” she said. “You can get a French book online, it’s just that it’s hard in Toronto for parents to take their child and say, ‘Ok, let’s go find a French book for you and buy one.’”

She feels it’s particularly important to find books in person because “if you want to keep your children engaged in learning a second language, you have to find books to keep them interested,” and, she adds, “there is still a joy in holding the books in your hand and flipping the page.”

While they might be new to the children’s hub, music teachers Darren White and Kyle Sullivan are certainly not new to the space.

As part of the previous Tuneology team, the pair were devastated when they heard the store would be closing its doors. Luckily, Girls Are owner Angela Loucks was happy to hear they wanted to stay in the building, and so was born a one-stop shop where children can learn, play and shop.

“That’s sort of the genesis of Girls Are and this hub that we have developing here, so luckily things worked out. Angela brought us in and we were able to continue teaching in the same spot we had been for years previously,” said White. For their part in the hub, White and Sullivan teach guitar, piano and drum lessons, as well as band ensemble so that students can participate in jam sessions and perform in public.

Like Loucks, they want to help empower children to be themselves and they both feel strongly that playing a musical instrument can go a long way in building that confidence.

“[Playing music] is huge for that. For one thing we do the private lessons which is nice because you get one on one time and kids are able to open up in that scenario [so] it really does help them to build confidence,” said White.

White and Sullivan also run summer band camps where the kids get a chance to rehearse and practice, then ultimately perform at the end of the week.

Beaming with pride, White speaks particularly fondly of one student who has been a regular at their summer camp since 2012. “We have Cameron and he’s been coming since day one and we’ve watched him grow up, and he still comes. So it’s great watching the kids grow up and seeing how it really helps them gain that confidence.”

Speaking with White and Sullivan, it’s clear that they’re both passionate about music and their students. But lessons are not just limited to children. It’s “open to all ages,” they said. “It’s six to 106.”

Girls Are, the Children’s French Book Corner, and Darren and Kyle can all be found on 145B Main Street.