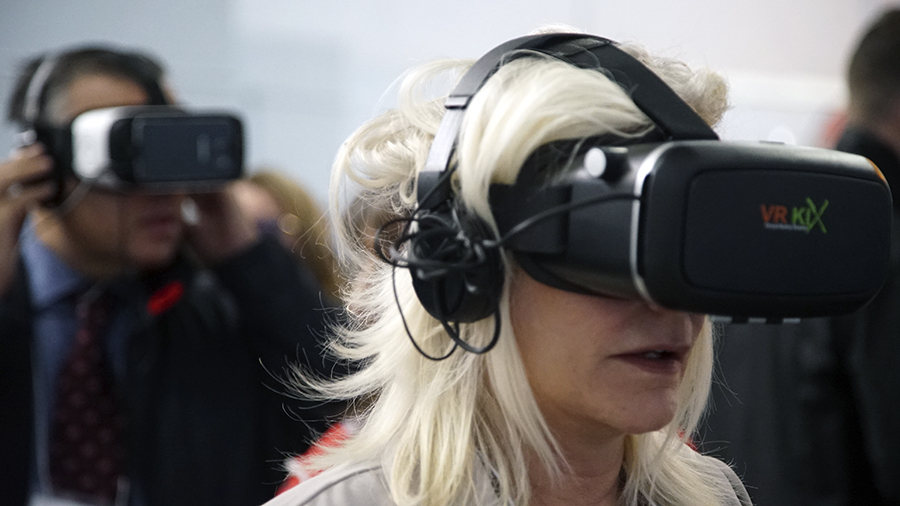 A woman tests out the virtual reality version of SESQUI during the November 1 open house. PHOTO: Submitted

In less than one year Canada will celebrate its 150th birthday, also known as a sesquicentennial.

To celebrate the birthday, a group of dedicated filmmakers from across Canada have come together to create what can only be described as a visually stunning 360 degree cinematic masterpiece.

Jen Scott, Beach resident and director of original content for ‘SESQUI’, is one of the people leading the project, which tells the story of Canada through a 360 degree lens.

The team traveled across the country from March to October to create the film. At times hiding in snowbanks, behind trees or waiting for weeks just to capture that perfect shot. The end project is a film that highlights the landscapes, people and freedoms of our country.

Recognizing they would need to create a fully immersive experience in order to do justice to their project, they decided to create a dome in which to screen the film.

Scott said “one of the main themes of the film is freedom. Freedom to be who we want, express what we want, where we want. Canadians are known for their vast landscape so we obviously show that off. And we obviously show off our talent, our diversity, again the freedom to move, to express.”

Referring specifically to a scene in which the Royal Winnipeg Ballet performs at the Winnipeg airport moving through the conveyer belt and incorporating luggage into their dance, Scott explains the meaning of these scenes is much deeper than people may realize.

As Canadians, “we can go anywhere we want,” she said. “Within the country, outside of the country. A lot of people want to live here because of that and we forget that sometimes. So another point of the film is to remind Canadians how fortunate we are.”

And the film does exactly that. Although it is still in production, on November 1 the SESQUI team offered a sneak peak of their ‘sizzle reel’ to approximately 200 lucky viewers.

The preview, which was just over two minutes, was displayed in a temporary dome built specifically for the open house. Scott explained that the real dome will be significantly larger and weather-proofed to accommodate any inclement weather they may experience while traveling across the country.

To describe the SESQUI sizzle reel as awe-inspiring would be an understatement. The cinematography in conjunction with the beautiful diversity displayed in the reel is breathtaking and unprecedented. The film moves seamlessly between close-up images of Canadian wildlife to stunning scenes of our sprawling landscape, incorporating the people and cultures of our country throughout. These scenes alone could bring tears to the eyes, but the team has also made sure to add a soundtrack so moving viewers will exit the dome with both goosebumps and an undeniable feeling of Canadian pride.

Scott said witnessing the reactions at the open house made her particularly proud of their work on the film “because [viewers] are so moved when they walk out it’s just like, oh my God. Even the toughest guys will come out of there teary eyed. It’s so immersive you can’t help but be moved by the landscape and the people.”

The tour dates are still to be determined but Scott said we can expect to see the dome in Toronto at the end of April 2017. This will be the first stop in their cross-country tour, which will reach more than a dozen major cities.

In order to reach as many Canadians as possible, including those in remote areas, Scott said they will have a virtual reality version available so that even those who cannot get to the dome will be able to experience SESQUI.

When asked what we have to look forward to in the full version, Scott explained there is so much more of Canada to see.

“The whole 20 minute version is shot in literally every province and territory,” she said. “So we’ve got musicians, artists, dancers, the Royal Winnipeg Ballet. We have hip hop dancers, we have cloggers, we have musicians performing in parks, we have underwater performers, we have aerial performers. It’s such a range of artistic expression in very unusual settings.”

“That was the point of the film really,” she said. “That was our director’s vision was to put performances in unusual settings. So to show off the artistry in the country but also the landscape and say this is who we are, this is where we live.”