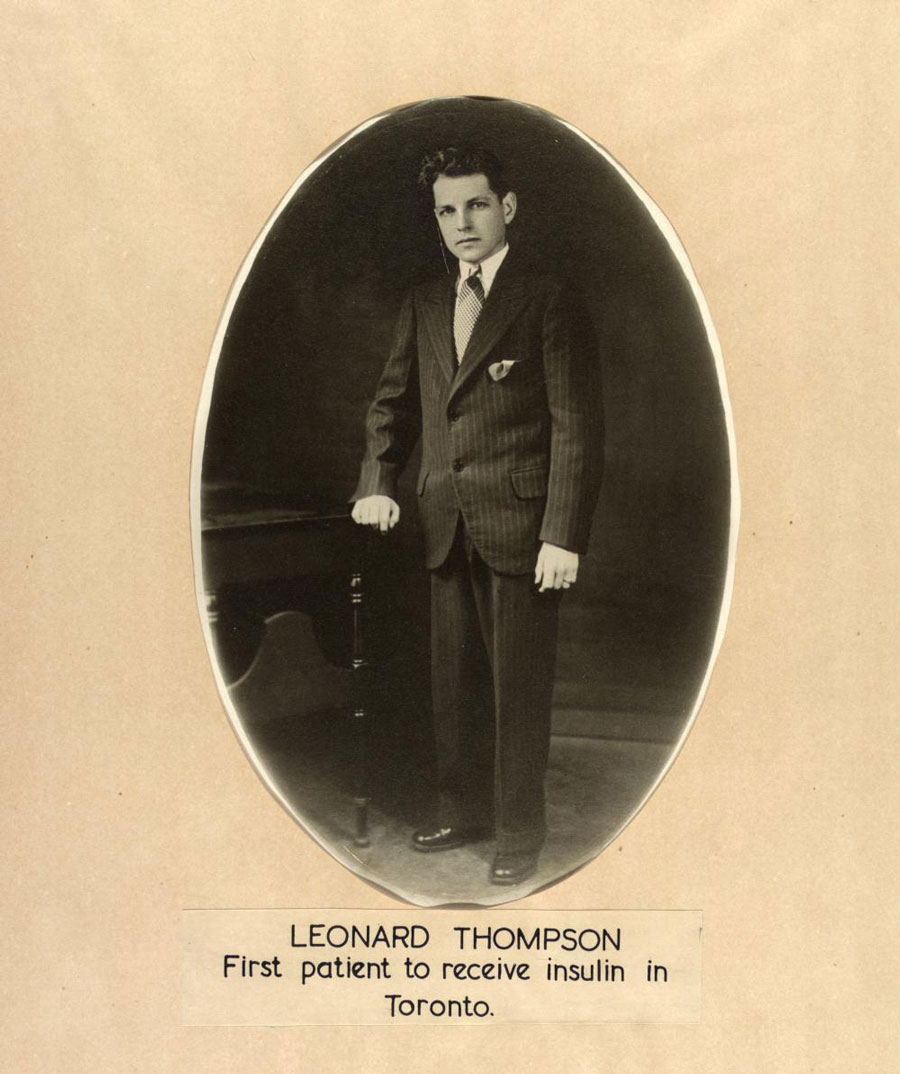 A photo of Leonard Thompson, the first patient to receive insulin in Toronto. PHOTO: University of Toronto archives

To celebrate Canada’s 150th birthday, this series looks back at the people and events that shaped our community “On This Week” in Beach history.

January brings a New Year and new hope. For 14-year-old Leonard Thompson of Pickering Street, 1922 brought only faint hope that he would survive the ravages of Type 1 juvenile diabetes. On January 11, 1922 Leonard became the first person in the world to be treated with insulin, the pancreatic extract discovered by a research team at the University of Toronto that would save the lives of millions of diabetics around the world.

Leonard was born in July 1907 and grew up in the Beach with his parents and baby sister Viola. The family was poor, but he was described as a happy kid with a great personality who loved sports, especially football.

In 1919 came the terrible diagnosis of diabetes mellitus. The symptoms were ravenous hunger and an insatiable thirst. The disease carried a prognosis of 11 months of suffering followed by diabetic coma and death. The only treatment was a starvation diet.

By the time Harry and Florence Thompson carried their listless, emaciated son into Toronto General Hospital on Dec. 2, 1921, Leonard weighed only 65 pounds on a 5’ 11” frame. His hair was falling out. He was a pale, living skeleton, skin and bones and close to slipping into a coma.

Doctors told his father that, barring a miracle, there was no hope. The boy was on death’s doorstep. His parents were desperate and agreed to an experimental treatment developed by Dr. Frederick Banting and his assistant Charles Best. The first injection of insulin was unsuccessful, but Dr. J. B. Collip found a process to refine the extract.

On Jan. 23 Leonard was given another injection and his blood sugar level plummeted. His symptoms began to disappear with further injections. He became stronger and was able to go home to Pickering Street in May. His life had been saved by one of the greatest achievements in medical history, a spectacular breakthrough that gave hope to millions.

In October 1922 Leonard was put on insulin permanently. He was able to live a fairly normal life and worked as a clerk for a drug company. Thanks to insulin he survived another 13 years, dying of pneumonia thought to be a complication of diabetes.

Years later Dr. Banting asked a family friend if the boy had any fun:

“Yes, he had some fun. He used to get drunk nearly every weekend.”

In 1923 Dr. Banting and Prof. J. J. R. Macleod became the first Canadians ever awarded the Nobel Prize. Banting shared his prize money with Charles Best while Macleod shared his with Dr. Collip. Covering the story was a young Toronto Star reporter by the name of Ernest Hemingway.

Knighted by the King in 1934, Sir Frederick Banting was tragically killed in a military plane crash in 1941. His life story is told in Glory Enough for All (1988), a made-in-Toronto TV mini-series which won nine Gemini Awards. The film is adapted from the book The Discovery of Insulin by Michael Bliss, one of my U. of T. history professors. The title is taken from a scientist’s comment that “there is in insulin glory enough for all.”

R.H. Thomson portrays Banting as a cranky perfectionist. Maybe genius needs obsession. Banting used to say, “No one ever had an idea in a dress suit.”

The movie is beautifully done, but only mentions Leonard Thompson a few times in passing. The focus is on a privileged American girl, Elizabeth Hughes, daughter of the US Secretary of State. Little 45 pound Elizabeth received insulin in August 1922 and lived until 1981. She described her early years of starvation as a “nightmare” from which she had awakened in Toronto to lead a normal life.

“Isn’t that unspeakably wonderful”, Elizabeth exclaimed to her mother, “It is truly miraculous!” For a time Elizabeth was the most famous girl in America. Her story made for a more dramatic movie, but we shouldn’t forget Leonard, admitted to hospital as a public ward patient (i.e. a “charity case” in those days). He was just an ordinary lad in an extraordinary life and death struggle.

Thanks to Beach resident Sheila Blinoff for telling me about the boy who lived on my street just a few doors down. Our history is all around us. Because of the discovery of insulin a kid who loved football was alive to see Ted Reeve lead the Balmy Beach Beachers to two Grey Cups in 1927 and 1930. That March in 1922 Toronto won the Stanley Cup. Hey, we can dream big!

Here’s a New Year’s toast to Leonard Thompson, the miracle boy from the Beach.

Bernie: So happy to see Leonard’s story in the paper. For anyone who wants to know more of what went on behind the scenes, I heartily recommend The Discovery of Insulin by Michael Bliss – my history professor too.

Thanks Sheila,. Insulin is Toronto’s gift to the world, but it is only a treatment for diabetes, not a cure. Diabetes is still very much with us..Rates of type 2 diabetes are growing around the world. For more information, check out the Canadian Diabetes website . Are you at risk of having pre-diabetic or type 2 diabetes? Take the two minute test at http://www.diabetes.ca and http://www.diabetestest.ca

As a 28 year resident of Pickering Street, I found this story especially fascinating and am curious to know what number Leonard lived at.

I’ve read his family lived at 59 Pickering and later moved to 111. However, his early medical records show 57 Pickering St.

Re Leonard Thompson, the Miracle Boy from the Beach: Sorry I didn’t see these letters sooner. According to the City Directory father Harry J. and the family lived at 87 Pickering St. from about 1919 until the early 1920’s then moved to 111 Pickering St. from around 1922 or 1923 until the 1930’s. You can check Toronto Directories online. Leonard is listed as a clerk at Lymon Bros. & Co. He died in 1935.