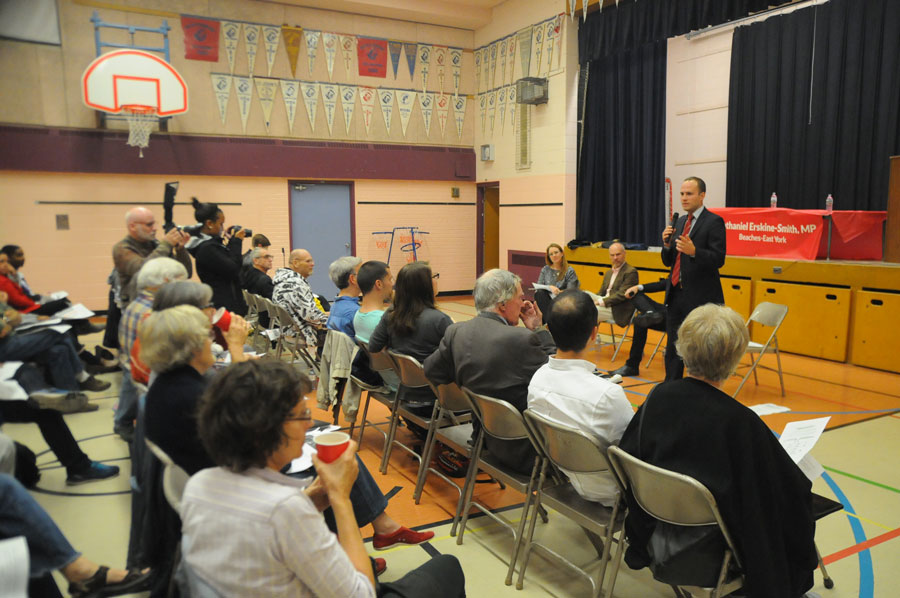 Beaches-East York residents were asked to share their views on electoral reform at an October town hall. PHOTO: Anna Killen

Beaches-East York MP Nathaniel Erskine-Smith does not agree with his government’s decision to abandon its promise to reform Canada’s electoral system.

Prime Minister Justin Trudeau announced yesterday, through a mandate letter to democratic institutions minister Katrina Gould, that the government would no longer pursue changing Canada’s electoral system. Trudeau and the Liberals campaigned on a platform that included electoral reform, with the prime minister promising Canadians that the 2015 election was the last election that would be held under the first-past-the-post system.

Local Liberal MP Erskine-Smith says he is disappointed with the government’s decision to walk back its pledge.

“I am disappointed, and strongly disagree with the government’s decision to abandon electoral reform,” said Erskine-Smith in an email. “I have voiced my support publicly for moving towards a more proportional system on many occasions, including in the House. A referendum at the same time as the 2019 election would have been a fair compromise for all parties.”

In October, Erskine-Smith and Liberal MP Mark Holland hosted a well-attended electoral reform town hall — part of a cross-Canada tour to hear from Canadians — in the riding. There, Holland told the audience that it was the government’s “objective” to change the way we vote.

This afternoon, Erskine-Smith published an op-ed in the Huffington Post detailing his position, writing, “to all Canadians who support the promise of reform, and especially to those who supported me and believed in my promise of change throughout both the nomination and general election in Beaches-East York, I am deeply sorry.”

Erskine-Smith publicises the New Zealand MMP system and referendum route to its adoption. The NZ referendums never used a ranked choice to prevent split voting. MMP was previously recommended by a NZ Royal Commission. The publicity, as usual, favored MMP, which is an incumbents PR. (The Welsh Richard report said it denied voters the fundamental right to reject candidates, and urged change to STV.)
As in Britain, a Labour government backed MMP (aka AMS) but official independent reports generally favored the Single Transferable Vote. The apparent exception, the Jenkins report, for a version of MMP, was because privately “Blair wouldn’t give us Single Transferable Vote (STV).”
Similarly, in Canada, the collectivist parties, the NDP and the Greens, not only support MMP but have strongly opposed STV/PR with its voters freedom to rank candidates in individual order of choice (as recommended by the BC Citizens Assembly).
Richard Lung. “Democracy Science” with links to 3 free e-books on election method and science.

Like the scholar Peter Russell, who testified before the ERRE committee, I began the process with a preference for MMP but grew to like STV the more I learned about it. It seems to work quite well in Ireland.

Hi;
Keep at it. Unfortunately, I am becoming more and more disillusioned with Trudeau. His excuses for not moving to a more representative system are disengenuous!