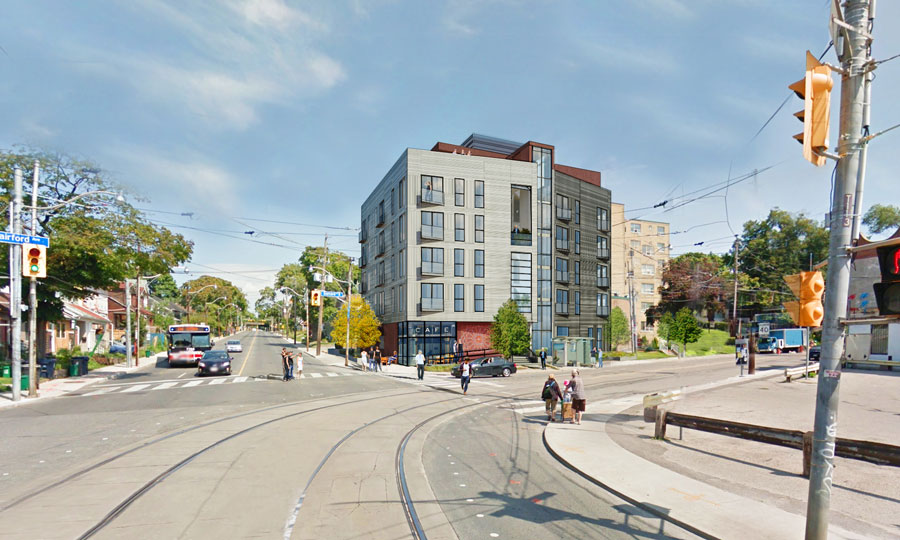 An architect rendering of the proposed co-op development at Coxwell and Gerrard. PHOTO: Submitted

Residents of the Coxwell and Gerrard neighbourhood gathered to learn more about a proposed co-op development at a city-led community consultation late last month.

Around 50 people attended the January 24 consultation, held at the Neighbourhood Unitarian Universalist Congregation on Hiawatha Road, to hear from developer Innstead Co-operative Inc., its architect LGA Architectural Partners and city staff, and voice their concerns and comments on the proposal. The proposal is asking the city for a zoning amendment to allow it to be higher and denser than current area bylaws allow.

Plans detail a six-storey mixed-used development at 355 to 363 Coxwell Ave. with 33 units comprised of 28 studio, one- and two-bedroom units, office space for the co-op, and retail units at street level. A green roof and rooftop garden are part of the proposal, as well as a large staircase, larger elevators and space for bike and scooter storage.

Innstead is an East End co-operative non-profit housing provider that has over 50 properties and 120 members in the area of Jones east to Coxwell, from Queen north to the railway tracks. Its member-driven mandate means “we don’t have to make a profit, just break even,” said Innstead consultant Paul Connelly, meaning the co-op is able to offer more affordable rents.

“We want to keep as much affordable housing community controlled as possible,” he said.

The development would be unlike any of its other properties — they have focused mainly on detached and semi-detached houses — and would, in part, house some of its members who need to move to smaller, more accessible units. The co-op is financing the project through equity it has developed over the years and hopes to get some help from the city under its affordable housing umbrella.

Meeting attendees appeared generally in favour of the co-operative — a variation of the phrasing “I think this is a good idea for the community, but…” was heard several times during the question and comment portion of the meeting — and keen to understand how such a system works.

Several people did voice concerns over the number of parking spaces proposed — Innstead is proposing nine, noting they arrived at that number by surveying their members and considering who would be living in the new co-op building — namely people who use transit, bike, and do not own cars.

But parking remained a concern for some in the crowd.

“I think this is great for the neighbourhood,” said Laurel Murphy, who lives close to the proposed development. But she has difficulty finding parking even without a new development, and thinks more could be done by the developer to increase the amount of parking spaces for the building.

“I understand your current study that says this round of residents may not [be heavy drivers],” she said, “but as soon as this building is there, it’s there, and if there isn’t parking built into it who knows what the situation will be five, 10 years down the road.”

A number of people at the meeting noted they will be pleased to see the existing northeast corner retail strip replaced — the lot has been home to two bars, a hair salon and a corner store, among others — with new retail.

Innstead consultant Connelly said he could not say what type of retail would occupy the ground floor of the development but said it would partly be up to the market.

“Given the size of the space — 550 square feet — given the fact that it’s on a corner, that there is transit there, depending on the competition from the grocery store, whatever, in a lot of ways we might not have a whole lot of choice,” he said. “There might be a limited number of people who want to be there. But obviously, we want to have something that we believe reflects well on the community.”

The city is currently accepting feedback on the proposal with a final report expected in the fall.