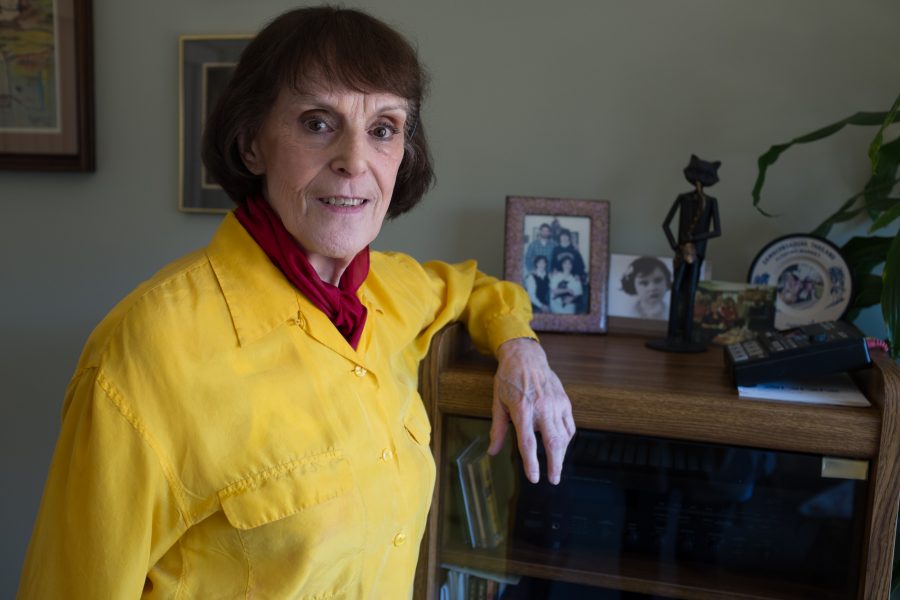 Author Riccarda Balogh at her home in the Beach. PHOTO: Anna Killen

The author fled her home country of Hungary in 1956 when she was in her mid-twenties. This is the story of her daring escape, the second of a two-part feature. Read part one here.

First, we split up. Seven individuals are harder to spot than a large group. We agreed to meet at the station immediately before the next train left town. I spent an interminable hour-and-a-half trying to be inconspicuous, which is a difficult task when you are tall and the only woman in the village wearing ski pants, hiking boots and long flowing hair.

Why the police never came looking for us is a mystery, unless our guard was not our only friend. In any case, by the time the Russian major showed up at 10, we were already many kilometres away in another small town, where we left the train. Any longer would have been very dangerous.

We had a definite plan now. My sister remembered that an old friend lived just another 40 km south, near the Yugoslavian border. It was essential to reach her and get some reliable information. Maps of the border area were not available as it was illegal for civilians to have them. What’s more, the border situation was in constant flux and rumours were rampant.

We walked the distance, a slow but relatively safe method of transportation. By the time we arrived, I limped almost as badly as Miki. My cheap, ill-fitting boots had rubbed my heels raw. Both were bleeding and I found it increasingly difficult to keep in step with the others. John, my resourceful as ever brother-in-law, managed to exchange my boots for a pair of white deck shoes. This helped.

At our friend’s house we found out that being this close to the border it would be suicidal to follow the highways – they were crawling with Russian troops. It was decided that we would have to travel only in the dark of night. My white shoes promptly got a camouflage treatment with black shoe polish.

A meal and a short rest later we continued on our way. Our luck held – the weather was absolutely awful. The heavy fog, wind and rain made us less visible and all but the most conscientious border guards would be staying indoors.

Gus and Miki, both with military experience, laid down the simple ground rules. We were to walk single file, within sight of each other. No talking, whispering or smoking was allowed, they could give us away. Our bearings had to be taken every hour or so to make sure we didn’t end up in Yugoslavia, instead of Austria. Fortunately, my little dime-sized compass was still safely hidden inside the lining of my mitten, despite the two body searches. We took readings by match light, hiding under a coat.

My feet by this time were in terrible shape. The dry blood compounded by severe swelling nearly cemented my canvas shoes onto my feet. Nature is merciful; the pain was so great that my mind refused to register it. The sensation was most peculiar, as if my lower legs and feet ceased to be parts of me.

Those misshapen appendages at the bottom of my legs kept moving independently of my will. I deliberately kept my mind preoccupied with other things.

On the third night, as we were crossing another one of the innumerable fields, we noticed a change in the consistency of the soil. It was very spongy and slushy, making it quite difficult to walk on. We assumed this was a result of the steady drizzle of the previous days, but we were wrong.

My sister let out a little gasp as she sank knee-deep into the bog and when Miki and I rushed to her aid, I went down to my hips in the ooze. Oddly, the first thing I thought was how wonderful the soft, cold “mud-pack” felt around my tortured feet. However, panic struck when I realized that I couldn’t find solid footing. The mire, like a gigantic leech, was sucking at me increasingly with each movement. My mind was racing at fever pitch. I suddenly remembered the story of WWII soldiers escaping from quicksand by lying down flat and slowly “breast-stroking”. We tried it. It worked. Once out of the quagmire we continued on our way, resembling wet clay figurines in motion.

After several hours of steady progress, we realized that we could not avoid crossing the highway, which seemed to be going to Yugoslavia. The steady rumbling of military vehicles told us that it would be impossible for seven people to cross without at least one being noticed. We had to make a difficult decision. Either risk crossing on our own, or find a local person to help us. This latter one carried its own risks, but still we came to the conclusion that we would rather face a potential stool pigeon than a tank. So now instead of avoiding all human contact, we started looking for the telltale glow of lamp-lit windows.

As we were crossing a sparse little forest, I suddenly felt something clamp down on my left foot. I was caught in a trap. Fear outweighed my pain. All the stories about land mines, traps and similar methods used by the border police sprung to my mind. Gus, who was following me, wondered why I had stopped. I pointed to my trapped foot and urged him in sign language to move on as fast as possible. He shook his head, got down on his knees and with skilled fingers felt the trap. And then he broke the rule of no talking to whisper the most wonderful words to me: “Only a fox trap, I can spring it.”

It must have been about 4 a.m. when we finally came upon the little house with the lights on. Miki volunteered to investigate the place. According to our agreement, if he wasn’t back within the hour we would press on without him. We hid behind some bushes. The cool mud felt so soothing that I dozed off, holding my sister’s hand. Loud singing startled me to my senses. A familiar, limping figure emerged from the fog. I heard John softly swearing under his breath. “Come on guys,” yelled Miki,”you won’t believe our luck.”

Soon it all became clear. Miki happened to walk in on the friendliest batch of bootleggers in western Hungary. They welcomed us “fellow outlaws” with open arms, offering rich, spicy foods, a sampling of their fresh brew and best of all, real beds to sleep in. Several hours later gentle shaking woke me. It was time to go on. Our hosts had found a local smuggler willing to act as our guide.

We continued with renewed energy and reached the foot bridge on the Raba River before midnight. Though we anticipated no problems, our guide said that he had better check it out. This turned out to be a wise precaution. The bridge was guarded by two heavily armed border policemen. They were sworn to shoot strangers on sight. “Not to worry,” said the guide. “I’ll borrow a rowboat.” When he had no luck, we considered swimming across. As only two of us were strong swimmers, this seemed impractical. Could the river be forded then? No way. Still, there had to be a solution!

Time was of essence and we already wasted two precious hours with these fruitless ideas. We had to reach the border before daybreak so the guards would be less likely to notice us climbing through the barbed wire fence.

We were all getting edgy and started several pointless arguments with each other. The guide suddenly reappeared with a new proposal. He might be able to bribe the guards if we could make it worth their while. Off came our watches and jewelry, cash being practically worthless. We really were taking chances now. What if our guide simply took off with our belongings, or if the border guards accepted the bribe and shot us anyway? We had only two alternatives, either we chanced the crossing or turned back and faced imprisonment. Not much of a choice. We headed for the bridge.

The two guards stood under the arch of the bridge when we got there. We could hear them talking quietly among themselves, just as they must have heard our footsteps on the wooden planks. But they kept our watches, their word and their honour too. They swore only to shoot on sight and they never did lay eyes on us.

Our guide felt, that as we now entered the border strip with which he was not familiar, we should find a local person to take over. Luckily his cousin who lived nearby had a 10-year-old son who was very familiar with the area. He led us.

We walked briskly the rest of the way, trying to make up for lost time but still we were late. Day was breaking when we got to the bare strip that preceded the barbed wire fence. All land mines had been removed from the strip during the heady first days of the ill-fated revolution and luckily there had been no time as yet to replace them. After a hurried goodbye, our little guide left us.

The border was guarded by foot patrols and lookouts in high watch towers. We lay flat on our stomachs in the cold mud, till we had timed the two foot patrols’ route. According to our calculations we had exactly three minutes to crawl the distance to the barbed wire fence. When we got there, Gus pulled the strands apart sufficiently to let us wiggle through one at a time.

Some of us were already on the other side, when we heard the guard’s voice boom out “halt or I’ll shoot!” As I glanced up, I saw him standing in the tower with his machine gun aimed at us. My heart was turning somersaults. As there was nowhere to run or hide, the remaining members of our group decided brazenly to follow us across. At least we would be together. The guard repeated his warning a second time. We stood there hesitating for a few moments and then we heard him yelling. “You idiots, get the hell out of here before my commanding officer returns.” This time we listened to him. Later we heard that four others were shot at the same spot earlier that day.

There is little more to tell. There was the refugee camp, the trip to Vienna and from there the flight on an old DC4 to Canada. But that’s another story.