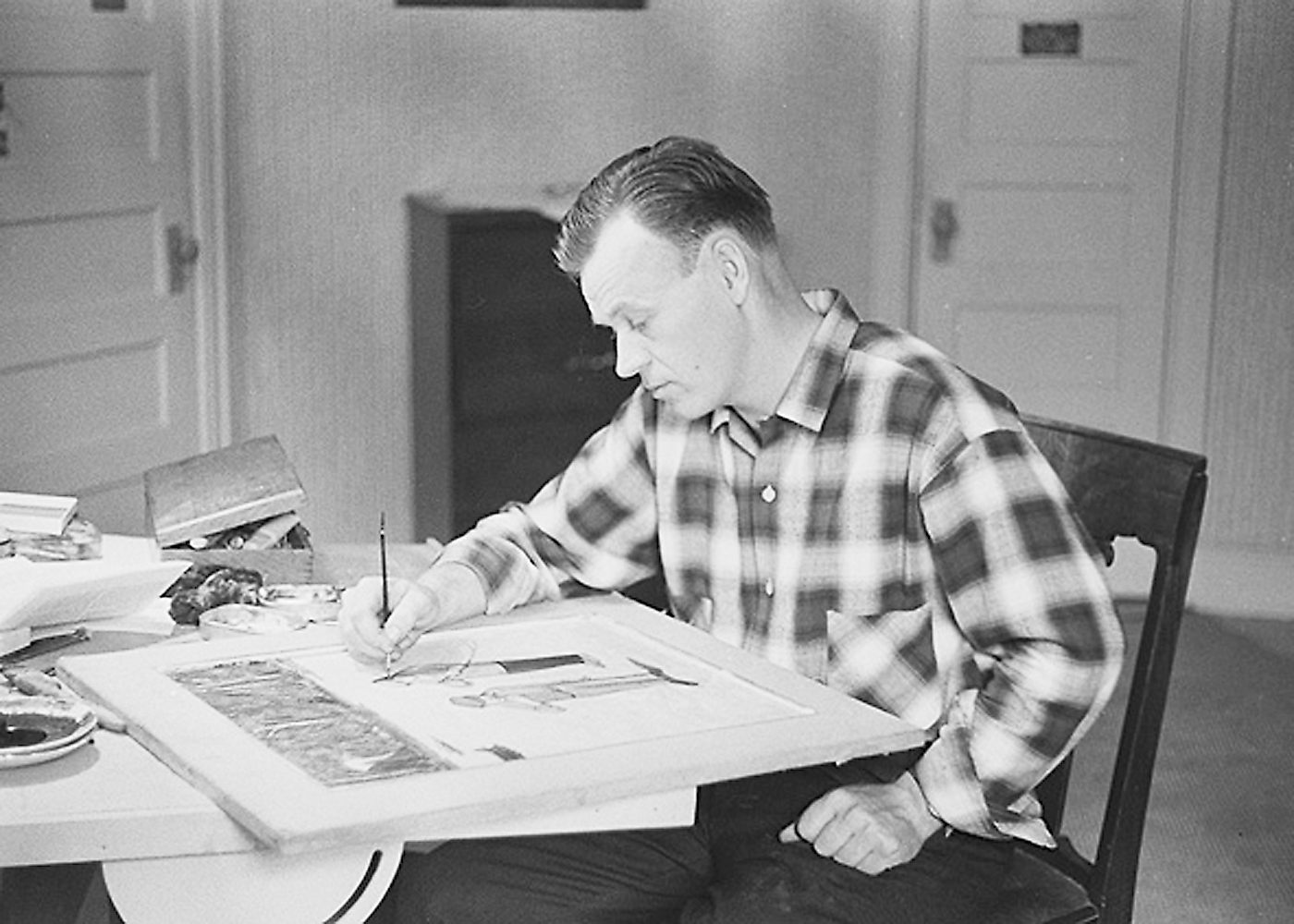 This year is the 40th anniversary of the death of William Kurelek, who lived with his family at 175 Balsam Avenue.

During the 1960s and ‘70s you could often find his artwork hanging in the homes of his neighbours. Some were gifts and others he bartered for services. My family lived across the road. We never owned a Kurelek, but he gave us a signed copy of his book Lumberjack for fixing his seat belts.

Bill Kurelek was born in Alberta in 1927 to a Ukrainian-Canadian family. His first language was Ukrainian, and he spoke English with a very slight accent. The eldest of seven children, he was bullied at school, and at home beaten by his father, whom he described as “an emotionally abusive tyrant.” Despite his unhappy childhood and youth, he was able in the 1970s to illustrate and write the text for two books showing the cheerful innocent lives of children in A Prairie Boy’s Winter and A Prairie Boy’s Summer.

During the Great Depression the family lost its grain farm, and in 1934 moved to a dairy farm in Stonewall, Manitoba. Farming life was harsh for a sensitive boy who wanted to be an artist. He was a disappointment to his father, and their dysfunctional relationship would affect him for the rest of his life. He attempted to prove his toughness by working in the forests in Quebec and along the shores of Lake Superior, and documented the experience in his book Lumberjack.

When their offspring were of high school age, the parents bought a modest home in Winnipeg to house them. On the weekends they brought them food from the farm. Kurelek later attended the University of Winnipeg where he earned a Bachelor of Fine Arts degree. Then he was on his own. After a stint as an impoverished student at the Ontario College of Art, he left the OCA, hitchhiked to Mexico and studied art informally there.

In 1952 he went overseas and booked himself into the Maudsley Psychiatric Hospital in London where he was diagnosed with severe emotional problems, schizophrenia and depression.

Later he moved to the Netherne Hospital which had an art therapy program, and there he painted The Maze, one of his most famous works, to please his doctors and justify being a patient. The imagery reveals a mind in torment with his skull lying split open in a prairie field. Inside it are boxes representing aspects of his life. They include himself as a hopeless cowering child, his father kicking him out of the house, his body stuffed into a test tube, his body being fed into a meat grinder, and a soldier bayoneting him. This painting is still used as a case study for art therapists and psychology students. In a 1970 documentary of The Maze, Kurelek said that he was not mentally ill at the time but had lost control of himself and was led by inner forces. In 2011, a new more extensive version of the film premiered at the Winnipeg Art Gallery. The group Van Halen used scenes from The Maze on an album cover.

Despite the art program he was still depressed and suicidal. He submitted himself to 14 electric shock treatments, but in the end, attributed his recovery to finding God.

Formerly an atheist, he converted to Catholicism in 1957. Two years later he returned to Canada. He had begun illustrating the Passion of Christ as told in the Gospel of St. Matthew. This collection of 160 pictures is now housed in the Niagara Falls Art Gallery and Museum. Years later he painted a mural in Corpus Christi Church at 16 Lockwood Road in the Beach.

At the Catholic Information Centre in Toronto, he met his future wife, Jean Andrews, a public health nurse volunteering in a church outreach program to rehabilitate prostitutes and drug addicts. They married in 1962.

By the early 1960s he was becoming recognized as an established artist, although he still worked as a fine arts framer and master finisher, the trades he learned in England. His employer (and later agent) Av Isaacs said that Kurelek spent longer on preparing frames for his own work than he did on his canvases.

Jean and Bill Kurelek moved to 175 Balsam Avenue and began family life together. Pictures in this era show them with their young children relaxing on the sand at the foot of Balsam Avenue.

Many of his canvases portrayed the daily life of ordinary people from his youth on the farm and his Ukrainian heritage and from other ethnic groups. The figures are usually involved in action – skating, cutting down trees, running, playing, milking etc. He admired the styles of medieval painter Hieronymus Bosch and 16th century Peter Bruegel, and his folk-like figures resembled modern versions of their subjects.

The Kureleks sometimes invited friends and neighbours to wine and cheese parties where recent works were shown to the guests. I remember seeing the 20 illustrations that would appear in the 1974 book, A Prairie Boy’s Winter, carried into the room one by one, starting with “winter begins when the crows fly south.” Most of the painting is of a crisp autumn sky filled with clouds of birds, and below a band of children is looking up in awe.

Another image I saw at one of these gatherings reflected Kurelek’s belief that this world would soon end, and by revealing all that was wrong, he could warn of the coming apocalypse. The scene is by Highland Creek with one of the Scarborough Hospitals at the top of a hill. Tumbling down are garbage bins filled with aborted fetuses, which are falling out onto the blooded snow and banks of the creek. Blood drips off the canvas and onto the frame.

A painting of this genre, warning the world to repent of its secular ways, shows Jesus preaching on the steps of Old City Hall, but no one is listening. Busy people, cars and streetcars pass by, oblivious to him. In another work, a crowd enjoying the nightlife of Yonge Street is being mowed down by a giant harvester driven by the devil.

One day around 1972 I was clearing snow, when I saw Bill Kurelek on his steps photographing the street. The result was one of his most recognized and pleasing pieces, a commissioned work entitled “Balsam Avenue after a Heavy Snowfall”. This could be almost anywhere in Toronto, but the streetscape and people in the foreground are instantly recognizable to anyone living there at the time. The old Balmy Beach School, razed around 1974, is in the distance. Bill Kurelek is brushing off his car and his four young children are playing in the snow. Three men are pushing a stalled car. And on the pavement outside my house are two women, shovels in hand talking – my neighbour and myself, I like to think. This painting sold for $241,400 at a 2008 auction. (There is also a second painting of the street looking north – “Balsam Avenue after a Heavy Snowfall – The Other Way”.)

One day I started walking back to the newspaper office after lunch when Bill Kurelek came across the road and asked: “What is the name of the ravine behind your garden?”

“I hope you’re sure because I’m giving a painting to the mayor this afternoon, and I have to have the right name.”

Nowadays you can see this work on the second floor of the Market Gallery at 95 Front Street East. Mayor David Crombie is lying on the grass in the Glen Stewart Ravine, dreaming. Around him are tiny Crombies wearing capes and resolving the causes he fought for: stopping an expressway, capping smokestacks, improving neighbourhoods, and bringing harmony to city hall.

The Glen Stewart Ravine appears in another painting, this time at the entrance on Beech Avenue just south of Kingston Road where there is a small park. A group of plump Canadians are sitting at a picnic table gorging themselves on fried chicken and other fast foods. A nearby garbage bin is overflowing with leftovers and packaging. They are unaware of third world skeletal figures crawling up the side of the ravine, their hands reaching for a morsel to eat and help.

In the 1960s at the height of the Cold War when many feared nuclear annihilation, William Kurelek, among others, decided to install a bomb shelter. It was not such a far fetched idea at the time: the Canadian Government was building the Diefenbunker near Ottawa. Kurelek wanted to construct a nuclear-proof shelter for 30 people in his backyard. Although he later scaled down his plan, his neighbours, family and his priest were opposed to his idea, and in 1965 the city refused to issue a building permit.

Instead he had an air-tight door put on his basement studio. This room was formerly a 4 x 6 foot coal shed. There were no windows and the lighting was poor. When he became ill with lung and liver cancer, some attributed the cause to working for years with toxic paints in an unventilated small space. In his last year he was able to spend four weeks painting and exploring his father’s village in Ukraine. When he died in November 1977, he was 50 years old. He left a legacy of over 2,000 paintings.

The last time I recall seeing Bill Kurelek was on Halloween Night 1976. He was at his door distributing candies. After complimenting my sons on their costumes, he turned to me and said, “What kind of a mask are YOU wearing?” I am still not sure if there was a deeper meaning to what he said.

For readers who want to know more about William Kurelek, there are many articles and pictures on the Internet. His book, O Toronto, contains several views of the Beach area. In addition to his books of paintings, there is his early autobiography up until the time he married, as well as a biography by Patricia Morley. Author Sheila Blinoff retired from the Beach Metro News in 2013 after 40 years of service.