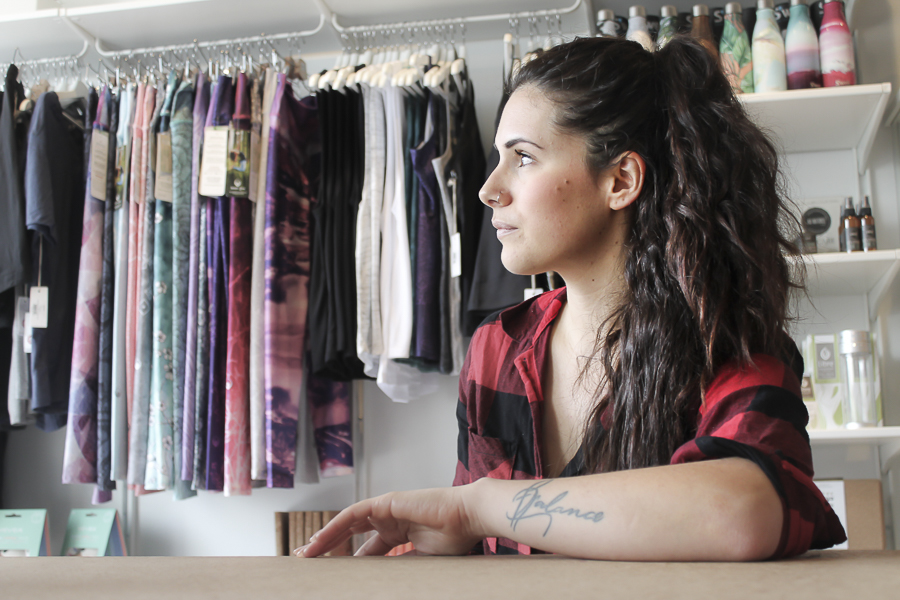 Kristen Likopulos at Afterglow Studio where she runs the Glow Girls program to help young girls develop self-confidence and balance in their lives early on. PHOTO: Lara O'Keefe

At first glance, you’d never know that Kristen Likopulos had struggled with an eating disorder.

The bubbly brunette, a third generation Beacher, comes across as happy, outgoing and confident – so much so that it’s hard to believe she ever went through a period of self-doubt. But she did, and she doesn’t hesitate to explain why she feels it’s so important to talk about it openly.

Smiling brightly, Likopulos pulled her hair to the side as she took a seat in the sunny reception of Afterglow Studio, where she works as a studio manager and leader of their Glow Girls youth group.

Though she was an active child and danced throughout her youth, Likopulos said she spent more time in her teenage years being social than being active.

It was a simple push to be more active that quickly spiralled into an unhealthy obsession to be thin.

“I was anorexic and over-exercised. [And] that all developed because I was losing control over certain aspects of my life,” she said. “I think any issue like that, it’s trying to gain control over something. Something that we’re feeling is slipping.”

Likopulos believes the obsession began when she started seeing results from her workouts. Instead of feeling content with the weight she had lost, she began to focus on losing even more.

“I was cutting calories and measuring everything I ate. I wouldn’t sit down when I was working, I would stand because it would burn more calories. It came to the point where I was running 10km, seven days a week on top of doing another hour of workouts, and I was consuming 500 calories [a day].”

Exercise and food intake began to consume not only her mind but her social life as well, she admitted. “I isolated myself from a lot of people,” she said. “If people were going to a Jays game I wouldn’t go because there was nothing there for me to eat. It was a lot of not seeing my friends because the eating disorder was more important, or being that weight was more important than socializing with people. So it totally took control over everything.”

It was a little over two years before Likopulos received the wake-up call she needed. By that time, the routine of eating next to nothing and purging any calories consumed through exercise had brought her weight down to a dangerously low 85 pounds.

“I would nod out in conversations with people because I had no sustenance in my body,” she said. “I had early onset osteoporosis, I lost my period. Everything you could think of. My sweat would smell like ammonia because I burned through every bit of myself.”

It was then that her doctor, without mincing words, informed her of the reality she faced.

“My doctor said to me, you’re not going to live to be 25 because you’re going to have a heart attack,” she said. “I thought, ‘This is not the path I chose. I don’t want to go down that path and I’m going.’ All that control I thought I had, I had no control over anything.”

Likopulos knew then that she would have to turn her life around, or risk losing it.

“It was a turning point for me where I said, I want to go back to school. That’s why I did holistic nutrition. I needed to get healthy but in my own way.”

Shortly after, she enrolled at the Canadian School of Natural Nutrition where she studied holistic nutrition and began to practice reiki, a Japanese form of alternative medicine shown to relieve stress and promote healing.

Likopulos attributes her healthy relationship with food and exercise today to both of these practices, but stressed that everything is a balance – a word she believes in so fiercely she had it tattooed on her arm.

“I work out five days a week, I do yoga three days a week, I run…it’s all a balance. I eat pizza, I drink beer if I want to. I’m just more conscious [and] I will never count a calorie again in my life, ever again,” she stressed.

Now, Likopulos spends her time working with young girls in the Glow Girls program helping to build their confidence and self-esteem.

“I thought, I want to run something for girls or teens that is body conscious, body positive,” she said. “I don’t talk about my eating disorder but we talk about what it is to love ourselves and what it is to love someone else and what the difference is between that and things we can do that show self-love for ourselves and our goals and our visions and gratitude. Being grateful for who we are.”

It’s a program she believes would have benefited her as a child and could have prevented the struggles she faced in her 20s because “I feel like I was always self-conscious. I always was as a kid. I think talking about being self-conscious or talking about our bodies … we didn’t have anything like that when I was a kid. I would feel self-conscious or I’d have these thoughts but I didn’t have an outlet for it. And I think having a program like we have here would’ve been [great].”

Pointing to Facebook and Instagram, she noted the fact that social media has made it increasingly difficult to shield the younger generation from seeing images of health and fitness models with what are deemed to be impossibly “perfect” bodies.

“There’s enough judgment in society that we don’t need 12-year-old girls to be having that judgment or feeling like they have to dress a certain way or wear a crop top or they have to do this or have to do that,” she said. “My thing is, be any shape you want to be. We’re all different. But as long as you’re healthy. ”

Even with all of the positive changes she’s made, Likopulos admits that like everyone else, she still has “off days”.

Instead of focusing on her weight or appearance though, “I will make sure I move my body, I will do yoga,” she said. “But not because I need to move my body to burn a calorie. I always make sure it’s nothing that I’m doing because I feel I have to.”

Just like her tattoo states, Likopulos reinforces that health and happiness always comes back to balance.

“People say to me, what do you want in life and I say: balance. I don’t need all the money in the world but you need that balance between work life and spending time with your family, or working out and getting that rest. Everything we do, we need balance.”