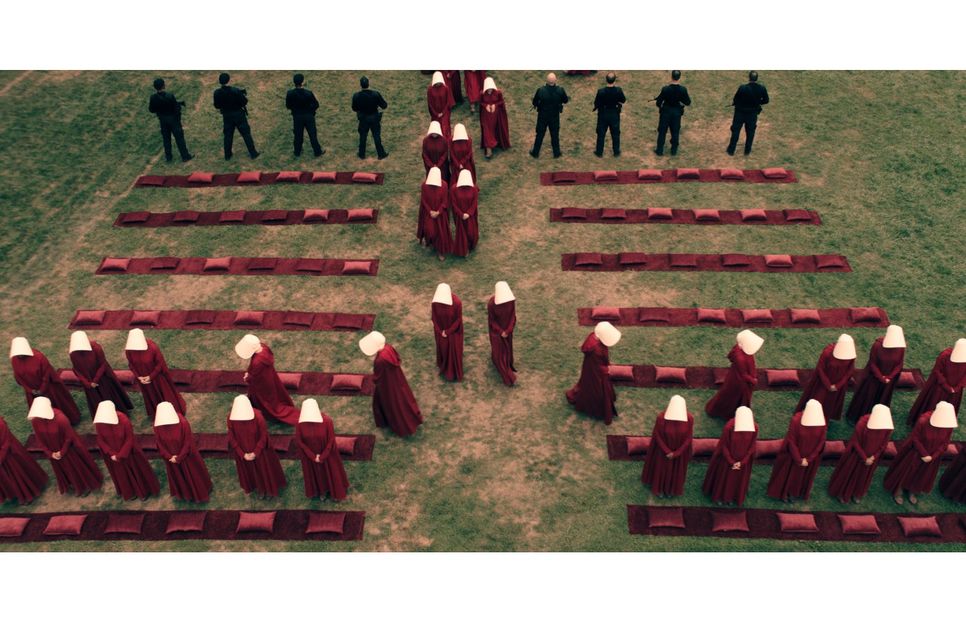 Imagine you arrive at your child’s daycare one morning and find armed guards outside the doors. A scary thought, but this really happened last September at the Church of St. Aidan’s on Silver Birch Avenue at Queen Street. Thank heaven the guns were merely props and the soldiers were only actors filming a timely adaptation of Margaret Atwood’s best-selling dystopian novel, The Handmaid’s Tale. The 10-part series premieres April 30 at 9 p.m. on Bravo.

Rev. Lucy Reid of St. Aidan’s says that the scene alarmed parents unaware of the filming and caused “quite an excitement here” as the young handmaids-in-training were led into the building by the armed guards.“The ground floor level of the Memorial Hall was set up as a dormitory, while the gym below was staged as a classroom,” she says. “Our somewhat dilapidated building apparently was ideal.” The Tudor-style hall was dedicated in 1923 as a memorial to those from St. Aidan’s who lost their lives in the First World War.

The trailer for The Handmaid’s Tale shows disturbing images of armies outside Toronto’s City Hall as well as film locations such as the CBC headquarters, Ripley’s Aquarium, Lake Ontario and the beautiful bridge at Old Mill Road over the Humber River.

What is truly frightening is the vision of a nightmare future living under a totalitarian regime which has taken away the rights of women, even to their own name. Offred (literally ‘Of Fred’) is a handmaid, “offered” for sacrifice as property to the Commander (Joseph Fiennes). She is determined to survive for the sake of her daughter.

Though filmed around Toronto and Cambridge, Ontario (standing in for Cambridge, Mass.) the setting of Atwood’s 1985 novel is New England in the Republic of Gilead. While set in the near future, the uniform red robes and white bonnets worn by the handmaids harken back to a repressive past. Atwood was inspired by her studies of 17th century America and its Puritan values.

People may label the tale far-fetched or say “that couldn’t happen here”, but Atwood has explained that “when I wrote it I was making sure I wasn’t putting anything into it that human beings had not already done somewhere at some time.”

Watch for the author herself in a cameo role in a scene where handmaids are being brainwashed. She also plays a brief part in Sarah Polley’s production of Alias Grace to air in the fall on CBC. Atwood’s 1996 book is based on the true story of a shocking double murder on a farm just north of Toronto in 1843.

What is your favourite book-to-film adaptation? I hope you have been watching the CBC’s wonderful series Anne taken from Lucy Maud Montgomery’s classic Anne of Green Gables. Acclaimed movies have brought world renown to Canadian authors like Michael Ondaatje (The English Patient), Yann Martel (The Life of Pi), Emma Donohue (Room), Lawrence Hill (The Book of Negroes) and Alice Munro (Away From Her).

In celebration of Canada’s 150th birthday, Wednesday, April 19 is National Canadian Film Day. Free screenings of 150 homegrown films include The Apprenticeship of Duddy Kravitz (1974) from the novel by Mordecai Richler. For more information check out the website at canadianfilmday.ca. Locally, the Great Escape Book Store is hosting its inaugural Book and Film Club movie screening tonight, April 19, at the Fox Theatre. Strangers on a Train begins at 7 p.m. with a discussion and social afterwards. You may also be interested in TIFF’s “Books on Film” series about “great cinema that began as great literature.”

Whatever your politics or religion or whether or not you think “the book was better”, enjoy the creative spirit and imagination of brilliant writing on screen or on the page as we Canadians look back together on a century and a half of democracy.