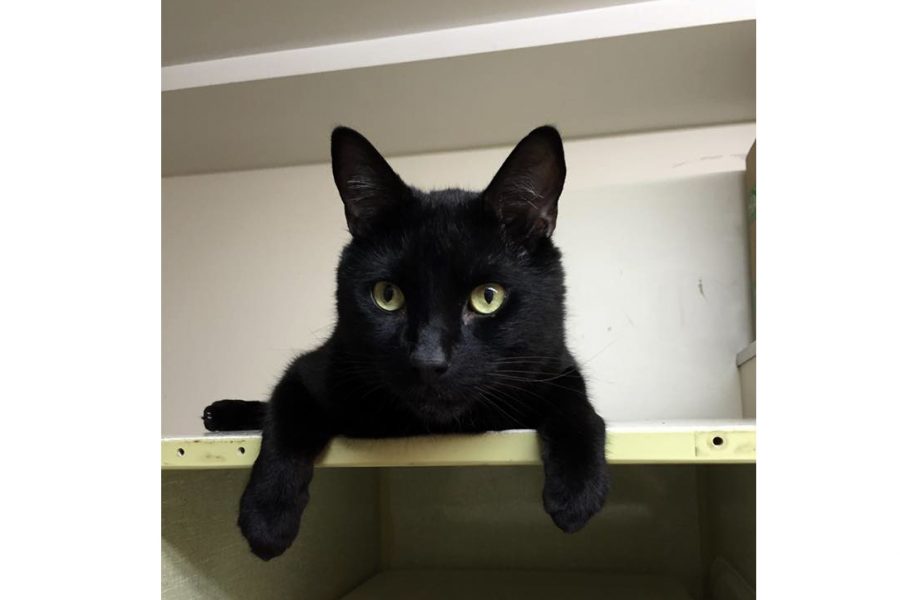 I’m moving at the end of this month which means there’s plenty of packing on the agenda. However, ‘procrastination’ has somehow made its way to the top of my To Do List. I keep telling myself to stop monkeying around, but I’ve got way too much in common with my Pet of the Month. So instead of wrapping the fine china, I’ve gone out on a limb, writing the day away about a cat named Tarzan.

Tarzan was king of the concrete jungle before he took command of a certain pet hospital in the Beach last July. I suppose that might be a slight exaggeration. The concrete jungle might better be described as the front porch of a kindly fellow Beacher to whom Tarzan made frequent visits for his daily meals. But Tarzan deserved much more than fine patio dining so the Good Samaritan escorted His Highness to Beaches Animal Hospital (BAH).

Now in its 44th year since becoming the first veterinary hospital in our community, BAH not only serves our pets but comes to the aid of abandoned animals, too. Working with animal rescue groups is a big part of it, but BAH does its own share of rescuing. Currently, several cats call BAH home until they are adopted into loving, lasting homes of their very own. Some of these cats require serious medical intervention before they’re ready for adoption, but Tarzan has always been in purr-fect health!

At roughly 8-years-young, Tarzan is a cool cat with an endless sense of adventure and entitlement! He doesn’t quite have Johnny Weissmuller’s classic Tarzan yodel mastered, but he does have the gift of gab. He also proudly possesses the ferocious appetite of a lion, which has led to something the staff call “the Tarzan discount”. Customers can benefit from reduced prices on slightly torn bags of prescription kibble thanks to Tarzan’s insatiable generosity.

Aside from his innovative price-slashing initiatives, he can also be a pretty affectionate little monkey when the mood hits him. He loves people. So much so, he would prefer to be the only monkey in your universe. Cat siblings would totally cramp his swinging single style so don’t even think of a cat sister named Jane.

If you’re okay with his Single Cat Rule, he’ll be as happy as a chimp graced with a banana bouquet. But don’t get the wrong impression. He’s not a clingy cat either. This cat knows how to self-entertain, which is a good thing at the clinic right about now. It’s springtime and the hospital is hopping.

This is the wonderful time of year when inspirational portraits of parasites that look more like aliens from a sci-fi movie are hung on the walls of the waiting room with care. Flea and tick season has arrived and nobody knows that better than our furry friends and the humans that live to serve them. For their safety and our sanity, we flock to the vet each spring to stock up on preventatives.

Easter will be behind us by the time this article comes out, but those of us with willpower may still have half-eaten chocolate bunnies hanging about and maybe a vase of Easter Lilies gracing our counter-tops. Both are toxic to pets so keep a watchful eye on your own little monkeys!

But let’s get back to the monkey business at hand…

Why is it taking so long to find Tarzan his own jungle? We’re all scratching our heads over that one like orangutans staring into a mirror. Anybody would go ape over Tarzan. But maybe it’s just like this crazy real estate market of ours. Sometimes, despite all the hype, it takes a while to find your dream home.

Tarzan is an approximately 8-year-old domestic short-haired, male neutered cat swinging the vines and discounting the merchandise down at Beaches Animal Hospital, 2304 Queen Street East, Toronto, 416-690-4040, www.beachesanimalhospital.com, Facebook.com/beachesanimalhospital – at least until our little jungle cat finds his dream home with YOU!

After reading your Pet of the month article about Tarzan I thought, well why not. Our cat who was much loved around our community died last October. He was a cat from the humane society and had been returned a number of times. So seeing Tarzan, I thought he’d fit in well. with us. The text of the article is at odds with the reception at the vets. He’s an eight year old cat and they want a donation of $200. Get real, they’ve had him quite a while and if they are looking for a good home, they sure aren’t realistic in their expectations. Perhaps if the vets had been more honest in the tale told to Marna poor old Tarzan wouldn’t be stuck down in the basement laundry room still. The vets appear very rigid in their expectations and considering how much they charge, I feel they are being very cynical in this matter. I did try to negotiate as we are pensioners, but without any valued response. Poor old Tarzan and he really is nicer than described.