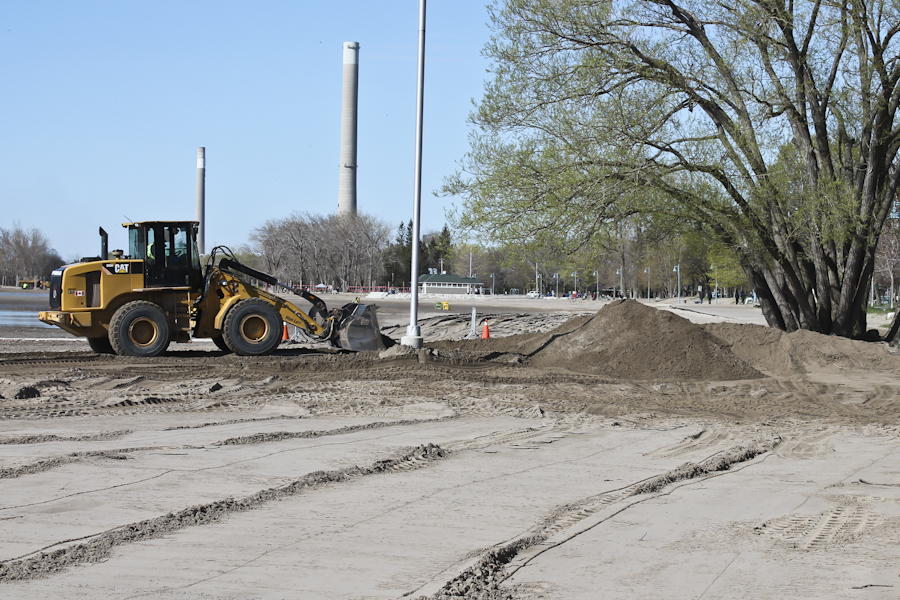 The shoreline along the Eastern Beaches has risen higher than it has in decades. PHOTO: Lara O'Keefe

With multiple storms ravaging our lakefront over the past few days and more inclement weather on its way, the fate of Leuty Lifesaving Station and the volleyball courts is still up in the air.

Toronto Regional Conservation Authority crews were on site May 3, attempting to clean up the beach volleyball area but with 50 millimetres of rain in the forecast some are worried all that work will be washed away.

A statement released by Environment Canada Wednesday morning went further, saying “total rainfall amounts may reach 40 to 70 mm in some locales before the rain tapers to showers on the weekend [and] with the ground already saturated, there is the potential for local flooding.”

But despite the recent warnings, it may come as a surprise to some that saving the Leuty Lifesaving Station is nothing new. Rather, it is somewhat of a longstanding tradition.

According to historian Gene Domagala, the nearly 100-year-old structure, built in 1920, has been moved three times during its lifetime because of the changing conditions of the shoreline.

An excerpt from Glenn and Jean Cochrane’s historical book, The Beach, tells us more: “Late winter storms pushed sheets of ice under the Boardwalk and the ensuing pressure splintered large sections of the walkway every spring. In 1952 a storm wiped out the railing that extended some 1,500 feet from the Balmy Beach Club to Hammersmith Avenue. In 1973 another lake storm destroyed a section of the Boardwalk running 1,500 feet west from Waverley Avenue.”

And although the station has become an iconic Toronto landmark — perhaps ‘the’ Beach landmark — it was not always so.

During the early 1990’s the structure became so dilapidated due to years of battering by storms and neglect that the city was going to tear it down.

Never one to shy away from a fight, Domagala along with Glenn Cochrane and former councillor Tom Jakobek created the “Save our Station” group, with the goal of raising the money to repair the old lifesaving station and prevent the city from removing it.

With the support of the community, the trio eventually raised nearly $75,000 and did, in fact, save the station.

Domagala won’t take all the credit though.

“The Leuty Lifeguard Station is a historical life-saving structure that has been preserved and has great practical use even today. It is a beacon on the lakeshore. It has been saved through the efforts of many people such as Mary Campbell, Chris Layton, the Toronto Historical Board and the late Glenn Cochrane, among others,” he told Beach Metro News in a 2015 interview.

Those efforts have continued to this date after recent flooding required crews from the city of Toronto and the Toronto Region Conservation Authority to move sand and install armour stone in order to secure Leuty Lifesaving Station after significant erosion took place.

Past reports show that is the type of work that takes place around the station regularly.

But this year is different, with the city describing the situation this year as the worst flooding in decades.

Shirley Jones, a Beach resident since her birth in 1933 said there have been “quite a few” floods over the years but “not this much, that I recall.”

Remembering past flooding, Jones noted that at one time it was so bad that “an ice cream stand on the street right at the foot of Glen Manor was taken away one year.”

And it’s not every year that the Beach Metro News office gets a phone call from Domagala, speaking from the boardwalk as he takes in “our beach” after the flooding, checking to make sure our station is OK.

Have you been down to the boardwalk lately? Tell us your stories about Leuty, past and present!