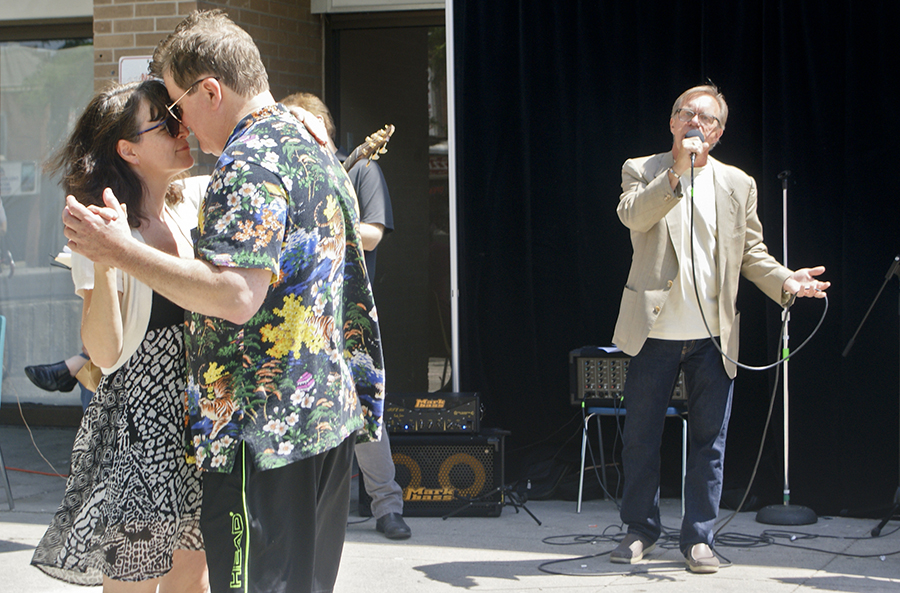 Area musician Bill MacLean entertained an adoring crowd at Main Square’s 100in1Day community fair June 4, 2016. The square at Main and Danforth was transformed to a space of music, painting, sidewalk art, buskers, gardening, and bicycle tune-ups for the event, which began in Bogotà, Columbia five years ago. PHOTO: Anna Killen

Things are changing along Danforth East — and we’re not just referring to the much-discussed name change along one part of it.

The second annual Danforth Village Fair takes place Saturday, June 10th at Main and Danforth — and this year, the event puts the busy corner in an even brighter spotlight. That’s because the East End is the city’s 2017 Cultural Hotspot, and the Main Square event is part of the initiative’s SPARK program, which works to support local arts organizations and talent through seed funding and partnerships.

The fair in the latest piece in a move towards revitalizing the square. One that has city planning leading a Danforth Avenues Study with input from DECA’s Visioning Committee and other community leaders and one which internationally-renowned urban designer Ken Greenberg didn’t hesitate to call “a grassroots movement to help this place live up to its name.”

Greenberg, who will be speaking at the Danforth Village Fair and whose work focuses on neighbourhood rejuvenation, explained that although Main Square has been around for many years, the name stood for that of a development rather than a community square.

“Main Square is a small [space] but it’s an interesting one because there are so many people around, you have transit there, you have a lot of sidewalk activity and I think it has a lot of potential, and in a way it’s even more interesting because it’s not right downtown,” he said.

The area has been undergoing a transformation for some time now but is more recently coming into its own with new developments such as On the Danforth, Canvas Condominiums promising to bring more residents to the community, and The Village at Main Station which works to provide safe and affordable housing for people.

According to Greenberg, making the space even more enjoyable and accessible for people shouldn’t be a complicated process, giving the example of American urbanist William H. Whyte, who discovered while working with the New York City Planning Commission during the 1960’s and 1970’s that improving urban plazas and public space could be “really simple.”

“He pointed out just basic human needs… a place to sit, ideally,” he said.

It could be things like moveable furniture so you can follow the sun or be in the shade, he said, a place to get an ice cream or a drink or a sandwich, opportunities for various cultural things to happen, pop-up markets, recreational activities, celebrations.

“Sometimes it can be really simple,” said Greenberg. “Just being set up in a way that’s flexible so people can appropriate the spaces and ideally the edges of the space have animated uses and it’s on people’s paths, their sort of daily routines.”

And when it comes to daily routines and transit, in particular, architects James Brown and Kim Storey of Brown + Storey Architects — the architecture firm that will be sharing their vision for the square on June 10 along with Greenberg — have some thoughts that are a little more out of the box.

“There’s a missing link between the Danforth subway and the GO [station],” stated Brown. “When you get out of the Danforth subway, where’s the GO station? You would never know where it is and furthermore, it’s the most treacherous crossing. We’re suggesting, why not tunnel underneath there and create a new link connection to the Main Square.”

Brown, whose firm worked on the well-known and now bustling Dundas Square said they took a similar approach when working on that project and much like Yonge and Dundas Square, the benefits of such a project would include eased congestion and the creation of a safer corner as well as creating a more attractive square that would result in more activity on that corner.

“There are parts of the city that were never finished,” explained Brown. “They’re kind of left undone. They’re a kind of blind spot. And these are areas where you could put new buildings that could frame the park, frame the street, make the bridge kind of a public forum.”

In listening to both Greenberg and Brown, it’s clear they share the vision that Main Square has the potential to be a hot spot in the East End, perhaps even in the city.

“There’s no restraints on this [project],” said Brown. “Everything we’re doing I think could be done. It’s unlocking that potential and there’s a heck of a lot.”

Ken Greenberg and Brown + Storey will be talking more about the future of Main Square June 10 from 12 to 6 p.m. at the Danforth Village Fair.

Having Ken Greenberg and Brown + Storey in to present ideas to the community is a big deal. The barriers that divide the Main-Danforth and Main Square, are big challenges, but with creativity and serious attention to function and form, they’re not insurmountable challenges.