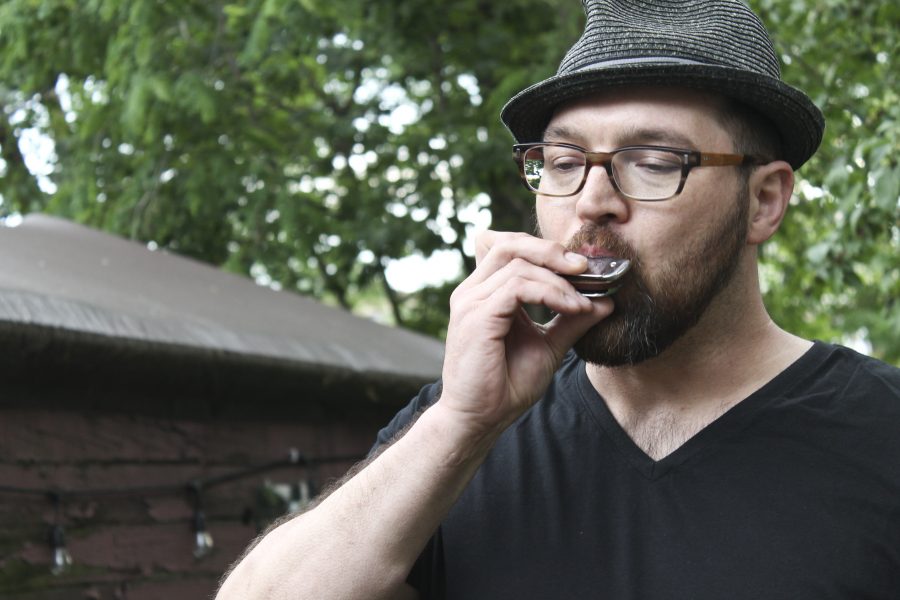 Michael Parker -- also known as the "strolling harmonica man" in the Danforth East neighbourhood -- plays the harmonica in his backyard. PHOTO: Lara O'Keefe

On the one hand, Michael Parker is exactly who one might picture when thinking about a strolling harmonica player – outgoing and jovial, his happy demeanor fits perfectly with the upbeat tunes he plays on his evening walks through the Danforth East neighbourhood.

On the other hand, he doesn’t fit the mold at all. Sitting down at a table at a restaurant near Danforth and Woodbine, Parker removed his baseball hat and glasses as they fogged from the humidity outside, and explained that his background and chosen career path lies not in music, but in architecture.

Originally from Oklahoma, he spent nine years in the military before deciding to move to Ottawa for graduate school – a move which Parker joked was at least partially influenced by his friend informing him that Canada offered the allure of fries with gravy.

And while he was thrilled by the idea of moving north, his mom – who still lives in Oklahoma – did not feel the same way.

“I told my mom I was going to go to Canada for a few years and she said, ‘No, you’re not. You’re going to meet a girl and you’re never coming home.’” Lo and behold, Parker met his now wife, Katy when he was working as a teaching assistant at Carleton University. “At our wedding [my mom] leaned over during our dance and said, ‘I told you so.’”

But despite being happily married, Parker said there’s one problem.

“My wife can’t stand [the harmonica]. It’s part of the reason I play in the street. It’s like one of those heartbreaking things the universe has done to me.”

Lucky for Parker, who comes from a musical background – his mother is a gospel musician, his sister is a singer, and his father used to be a drummer – the musical gene appears to have been passed on. His 20-month-old son “loves the harmonica. He adores it.” He’s loved it from the womb, said Parker, noting that “he would change his kick” to the beat of a song when his wife was pregnant with him.

Parker himself played French horn in a symphony when he was younger, sang in a church choir and a high school choir, was involved with a show choir, a drumline, and the marching band.

The harmonica however, was not an instrument he had intended to learn but rather, one that fell into his lap.

At the time, he was living on his own in San Diego so “I’d walk around the streets playing because it’s a terrible sound when you’re learning. And the most private place in the city, it turns out, is the middle of a street. It helped me get over stage fright.”

After a few weeks of practising on his great-grandfather’s rusty harmonica, Parker said the universe delivered when an acquaintance offered him a modern harmonica she had lying around.

“I liked it a lot so I started looking on Craigslist and a couple weeks later I found this listing that said, ‘I have no idea where these came from but I have eight brand new harmonicas in my house and I really want them gone. Give me 50 bucks for them,’” he recalled.

And the strolling harmonica man – as some in his Danforth neighbourhood like to call him – was born.

Parker said Toronto is not the first place he’s earned a similar name – in fact, he has been coined “harmonica man” in San Diego, Vancouver, and Ottawa, as well.

“In Vancouver, I was walking down an alley playing and there was a guy…he was under a streetlight smoking a cigarette and he came up to me and went, in the coolest way possible, ‘Heyyy harmonica guy. I was at a party and we were talking about our favourite thing in the neighbourhood and you’re everybody’s favourite thing in the neighbourhood,’” he laughed.

For the most part, he enjoys remaining somewhat anonymous. It’s easier to play when he is, he said, because he feels “like kind of a ninja. Like I’m there but I’m not there.”

But he also added he’d like to have some fun with it and include the community by organizing what he called a “Pied Piper Picnic” – a community event in which he would draw a map of the neighbourhood and list what time he’s leaving. “When I go by [your house], you just come out and follow, bring a bottle of wine,” he said. He’d lead everyone to the park “and everyone can just chill out… I think it would be a lot of fun [but] I haven’t had the time or guts to do it yet.”

In the meantime, he’ll continue strolling through the streets, harmonica in hand with the hope of putting a smile on the faces of those around him.

“It’s almost indescribable how much joy I get out of giving joy,” he said. “It’s a lot of fun.”

Really nice story, Lara! Thanks so much for the kind words.