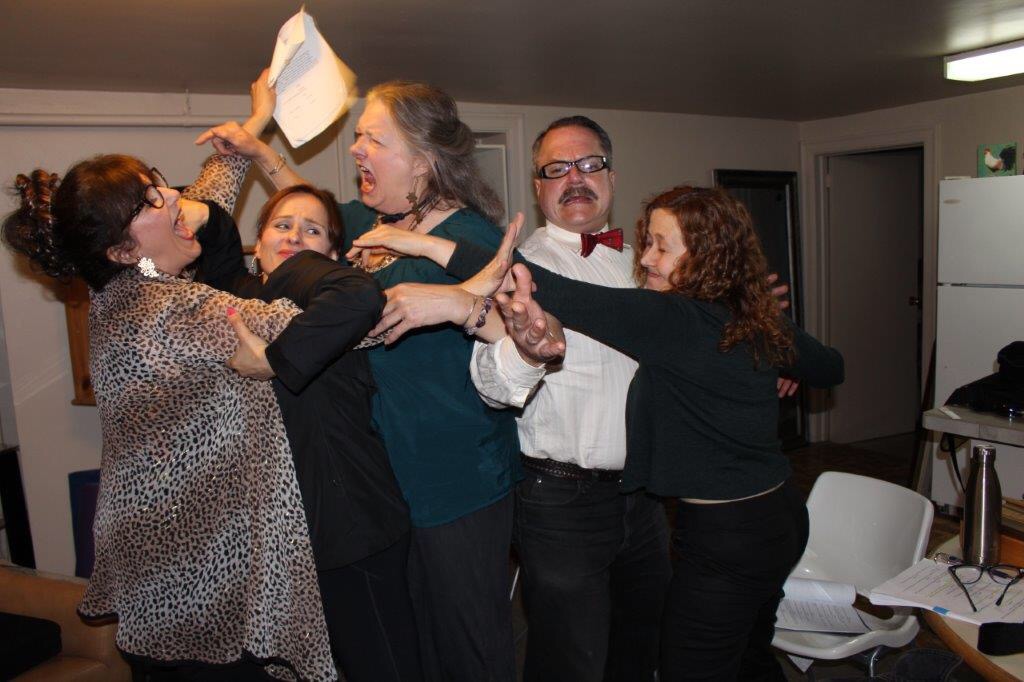 The full cast of Snap!, written and directed by Joanne Latimer PHOTO: Submitted

It is not surprising, considering the high-concentration of creatives in the ‘hood, that the East End is once again well-represented at this year’s Toronto Fringe Festival.

Founded in 1989, the offbeat festival celebrates and elevates the “fringes” of the performing arts community, calling it “theatre by the people, for the people.”

The 12-day artist-supporting event, which runs July 5 to 16, features 160 productions at 35 downtown venues, including site-specific performances – productions which are chosen by lottery, not jury, keeping with its grassroots ethos.

This year, the new home base “Fringe Club” is in the community centre parking lot and outdoor hockey rink at Dundas and Bathurst’s Scadding Court – a change in location following the recent closure of Honest Ed’s. An in-person box office throughout the festival can be found there at 707 Dundas St. W. For full dates and times of specific shows, and to purchase tickets, see fringetoronto.com or call 416-966-1062.

Remember that Fringe does not admit latecomers.

Talk about a local production. Four out of the six people behind the premiere production of Snap!, a heated, heart-filled comedy that deals with anger management and people “in a world on the brink of a global temper tantrum”, hail from the Beach neighbourhood.

Written and directed by Joanne Latimer, the show began as a writer’s challenge for Toronto Cold Reads, charmed audiences at the 2016 Short Short Play Festival at the Social Capital, and has now been developed by NightShift Theatre for Fringe.

Not one to shy away from the strange or the chilling, the East End’s Seven Siblings Theatre presents Eliza Clark’s grim, sci-fi thriller Recall at The Theatre Centre – Franco Boni Theatre, 1115 Queen St. W.

Directed by Seven Siblings co-founder Will King and featuring a performance by fellow co-founder, Marilyn McCabe, among others (Kyla Young, Genevieve Adam, Warren Kang, Luis Fernandes) the show centres around a young, challenging-for-the-times girl called Lucy in a world “in which crimes might be prevented before they occur.”

A Mickey Full of Mouse

Co-starring Louise Lupo, the two-woman show is more than just a reliving of a disastrous family trip in ‘76 – it’s a reliving that takes place after the pair fall into a magic snowglobe.

“My stories are quiet, they sit at a kitchen table,” says Wightman. “But like life, they’re fast-paced and in your face. As actors, Louise and I aim to change the molecules in the room.”

Produced by Anfom Productions, composed and sound designed by David Mesiah and stage managed by Sarah Johnston, the show, previously performed at Buddies in Bad Times Theatre and Red Sandcastle Theatre, asks the audience to “buckle up and enjoy the ride.” More at http://www.dawnawightman.com/.

Think of it as film noir – with a furry twist.

Simply Twisted Productions’ High Park Noir might be peak Toronto. Consider this description: “Condo development in High Park will leave its furry inhabitants homeless. If he can get sober, raccoon Detective Dick will expose corruption and save High Park.”

For adults only, the playful, piquant play see protagonist Detective Dick joined by Officer Pussy, a trust-fund puppy, and a range of revolutionaries. Beacher Laura Kyswaty appears as Angel the burlesque bat and Grandma Groundhog.

At Theatre Passe Muraille Mainspace, 16 Ryerson Ave. Tickets will also be available one hour before the performance at the venue.