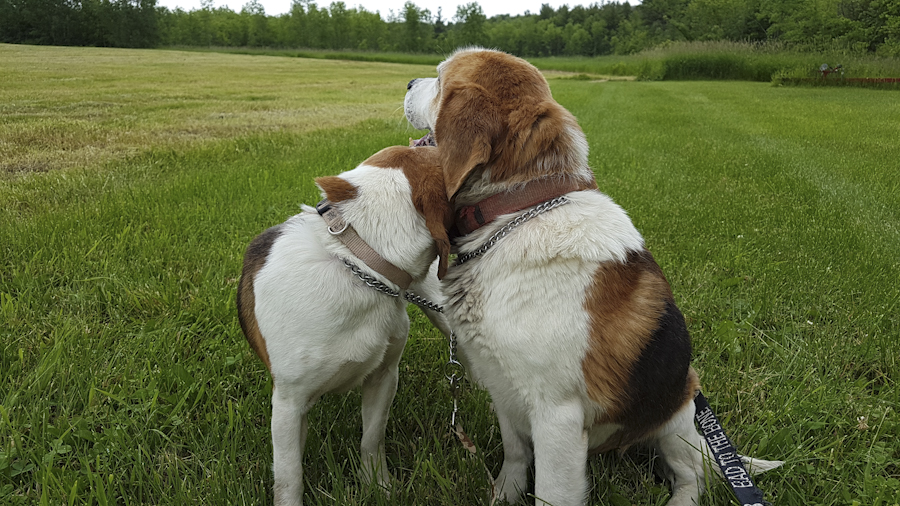 They say we’re connected now more than ever, thanks to the technological explosion of our times. There are so many ways to “connect” online, whether it’s with your next door neighbour or someone clear across the ocean.

Although, these two beagles are just as happy connecting on a couple of deck chairs. Blame me for romancing the porch swing that had its heyday back when silent films were all the rage. I’m sure Mary Pickford rocked a porch swing or two in her day. In honour of those bygone days, I named our two newest rescue waifs accordingly.

She was the “It” girl of the Flapper era, a silent film star that made a smooth transition to talkies. She was also famous for coining the phrase, “The more I know about men, the more I like dogs.”

He was a legendary thespian of the same era that was quoted saying, “The older you get, the more you realize that kindness is synonymous with happiness.”

And that’s how the beagles pictured here became known as Clara-Bow and Lionel Beaglemore.

But before we hop up on those deck chairs, allow me to share their backstory…

I received an email on June 8 from the Gananoque & District Humane Society. The staff was awaiting the arrival of two beagles from the local animal control. Information was limited. All that was initially known was that they had been found as strays and that they were stuck together like glue. They were also covered in ticks.

The male dog appeared fairly older than the female. Both were in poor shape but the female had the added burden of a condition commonly known as Cherry Eye which is basically the prolapsed gland of the eyelid. Neither was ready for the silver screen but the shelter staff had high hopes for their future. They just needed a rescue group to work with them. One look at their picture and we felt an instant…connection.

Vetting got immediately underway. Blood work revealed the tick infestation had left its mark. Both tested positive for Lyme Disease. Thankfully, they’re not showing any signs of trouble. Only 5-10 per cent of Lyme positive dogs develop symptoms and it is not contagious. We’re keeping paws crossed they remain symptom-free.

Nevertheless, Lionel has a mild heart murmur and his worn down teeth suggest he’s in his double digits. But he’s young at heart and after enjoying a soothing bubble bath courtesy of the Gananoque Veterinary Clinic, he’s got fur as soft as a newborn pup! Lucky for us, he loves to be petted. We call him the Inch Worm. He inches closer to you with every pat you dole out until you give in to a full fur massage, at least until young Clara-Bow steals the spotlight. The girl has no regard for personal space. Just ask Lionel. She’s right up in your grill until you surrender to her completely.

But our “It” girl has a right to demand star treatment. She underwent corrective surgery for the Cherry Eye but it didn’t take. It may be that she had been plagued with the condition too long for the procedure to work. Since the surgery is mainly for cosmetic reasons, we’ve opted to hold off on a do-over. She and Lionel deserve a little summer lovin’ first! After all, both dogs have this heartbreaking tendency to duck away from new people which suggests they’ve not known much in the way of love. We’re howl bent on changing that.

With the vetting behind them, the dynamic duo is now ready for a foster home. And there lies the challenge. Never have we seen a closer bond between two dogs. We may not know where they came from, but we have a hunch they’ve been through a lot and they’ve survived it together. It’s time they found happiness together.

As you can imagine, finding a spot for one down-on-his-luck beagle is hard enough. Finding someone to take on two beagles is like expecting to capture the moon with a lasso. We’re still working on lassoing the moon for our sweet, inseparable pair. In the meantime, they’ve found temporary lodging with yours truly.

So what have they been doing on their summer vacation so far? For starters, Lionel has been catching up on his beauty sleep. He has several favourite campsites in the house, but he’s an outdoorsman at heart. If it was up to him, he’d sleep on the back deck every night. Given the thunderstorms we’ve been having, I’ve had to insist otherwise.

Our flirtatious flapper, Clara-Bow, has been taking my summer lovin’ suggestion seriously by cozying up to our Bentley at every opportunity. But Lionel is still her leading man — or should I say leaning man. Whether he likes it or not, he’s her favourite pillow.

Last weekend, they were finally rested up enough to attend a party where they were a huge hit. It was a glorious Sunday afternoon when they descended upon the Bark & Wine fundraising event for Sheba’s Haven at Three Dog Winery in Prince Edward County. I insisted they keep out of the booze, but they had some pizza and an undetermined amount of freshly baked dog cookies while charming the socks off everyone who made their acquaintance. It’s all about making connections!

Back home, we assumed our positions curling up on the deck chairs to connect some more under the stars. Lionel did his inch worm dance while Clara-Bow leaned in for maximum adoration.

The ties that bind may sometimes defy distance but there’s nothing more magical than being right there – together.

Clara-Bow is an approximately 4-year-old spayed female beagle skilled at the art of adorableness.- Lionel is a roughly 12-year-old neutered male beagle and the gentle, reliable rock upon which she stands. They’re a Package Deal waiting to be scored at Big On Beagles (BOB) Rescue, www.bigonbeagles.ca.