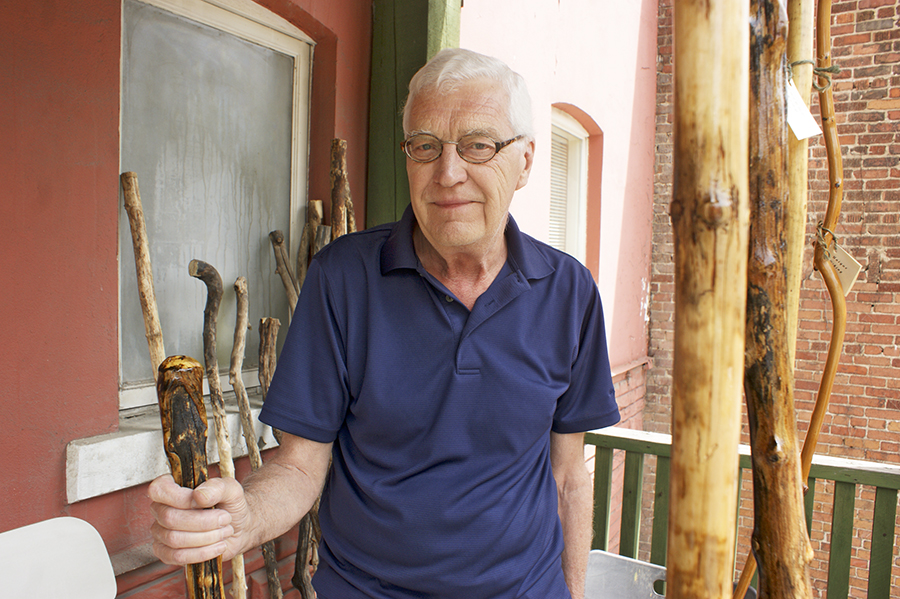 If you’ve found yourself on Queen Street just east of Ivan Forrest Gardens on a weekend, there’s a fair chance you’ve seen Robert Bertram on his balcony – and if you haven’t seen the man, you’ve likely seen the sticks and the sign.

A handwritten sign noting “Unique Hiking Sticks” for sale hangs on a green balcony underneath several handcrafted hiking sticks strung from the balcony’s roof. Often on the weekend, Bertram will be perched on the balcony crafting the sticks, or chatting with passersby curious about his process.

Retired from a career in the public sector, with a degree in political science, Bertram said making the hiking sticks is a hobby that started about four years ago. He was at his sister’s cottage on the Bruce Peninsula, and she had hurt her leg and needed some support for their walk.

“So I cut her a hiking stick, then took an extra one back [to the cottage], started working on them, and enjoyed it,” said Bertram, who now travels to his sister’s two or three times a year to collect deadfall that he strips there and then brings back here to finish. “You get all sorts of surprises.”

Those surprises range from rot inside – in that case, it turns into firewood – to intricate insect work beneath the bark. On one of the finished sticks Bertram showed me, insects had left delicate impressions on the wood that almost looked like Chinese characters – and on another stick, larger grubs had left their mark of a thicker pattern.

Bertram sands and finishes the wood in a simple manner using sandpaper, a dremel to round the handle, and wood varnish to draw out the natural highlights. In one piece, he amplified the juxtaposition between an inner layer of dead wood and an outer layer of new wood that had grown around the dead wood, by making the new layer extra shiny, and keeping the old wood more dull. While some might carve into or warp the wood, Bertram’s process keeps it simple and lets nature do the embellishing.

He said he enjoys finding out some of the history of the wood – woodworking runs in his family, with his father being a craftsman, so he has worked with wood all of his life. His sticks come in all types – pine, cedar, “cranky” – and popular – ironwood. He said people enjoy the dark ones more – why, he isn’t sure – and he thinks the majority of his customers are buying them for art rather than walking sticks.

“I suspect that most people buy them just as works of art,” he said. “A few people will use them, and they are useful in rough woods.”

Of his roughly three dozen customers a year – that’s about all he is interested in making, as it is a hobby – many come upon him while he is sitting on his balcony, either working or taking in the sights of Queen Street. A Beacher since 1979, he moved into these apartments several years ago after selling his house.

His balcony is “marvelous at Jazz [festival],” he said. “Have a glass of wine, the band’s right there. Or Easter parade or marathon, you just sit out here and enjoy it.”

And the million dollar question: Does he use a hiking stick when out in the woods?