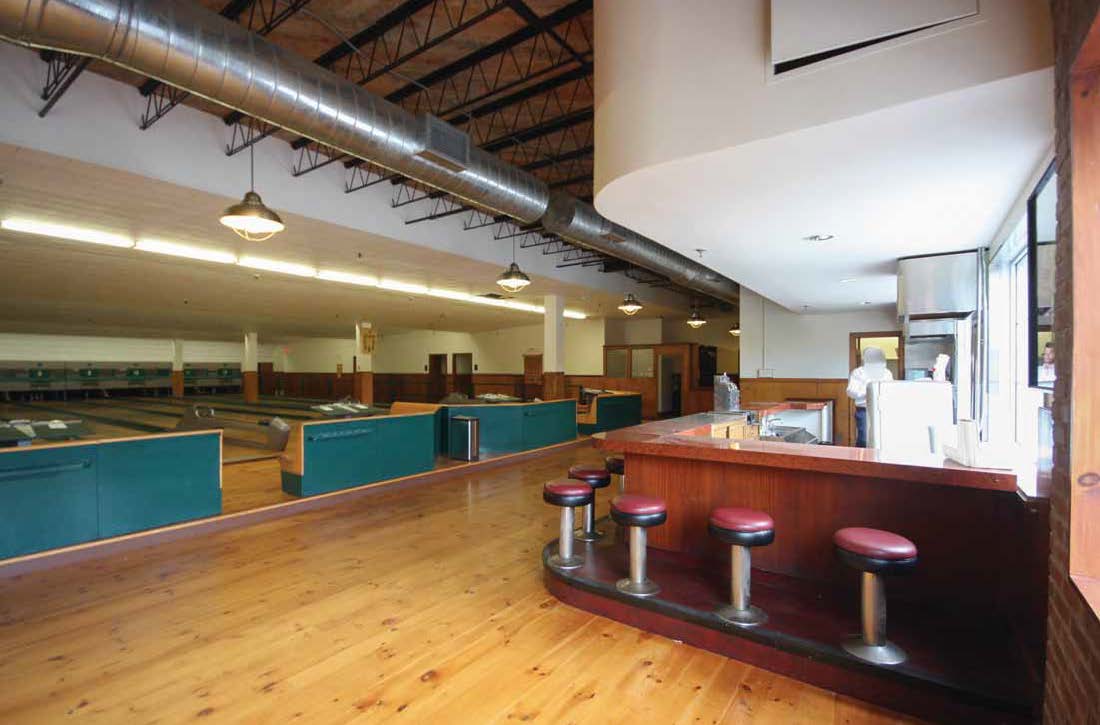 The Shamrock Bowl on Coxwell Ave. is up for lease. PHOTO: Contributed

The old Shamrock Bowl on Coxwell and Gerrard is up for rent – and if the right company takes over the lease, the retro bowling alley lane might be spared from destruction.

At least, that’s the intention behind the property’s listing, which marks the space’s 12 lane, five-pin bowling alley as a unique, appealing feature for startups and other companies looking to get creative with space.

Located above the Goodlife Fitness at 280 Coxwell Ave., the Shamrock Bowl is Toronto’s oldest bowling alley, dating back to the 1950’s. The bowling alley received an extensive and well-publicized renovation in 2009, keeping much of the original fixtures and equipment, but closed in 2011. (It’s website remains active.)

Listing agent Peter Knox came across the vacant property when he was looking for something fun to do with his girlfriend, who lives in the area, and saw the sign out front, he said. When his knocks at the door went unanswered, he called the landlord at Swisscan Properties, who told him the alley hadn’t been in operation for years.

Knox asked the landlord if he wanted to sell the building, and he said no, but he would like to lease it – preferably to someone who wants to keep some of the bowling alley fixtures in tact.

“It’s just so cool the way it is,” said Knox, who advised the landlord against gutting the 10,000-foot space, as previous consultants had suggested. “It’s like stepping back in time. I said, ‘Let’s see if we can make a go of it in the market as is.’”

The property still needs work, said Knox, who works primarily in office leasing, but he thought they could find a tenant who wanted to use a few of the bowling alley lanes as an amenity for staff in a non-traditional office, particularly in a neighbourhood in transition.

“I’m not suggesting the area is the next Liberty Village,” he said, “but that used to be the place to go for cheap rent and old buildings that were cool.”

“It’s a real family neighbourhood,” he said. “There’s a lot of young professionals, young families who are looking for something to do more than just sit at a bar and that they and their kids can participate in and enjoy as a family.”

The lanes will need to be improved, he said, but “the bones are there”, and Knox expects that eventually the space will be turned into a more lively amenity that includes at least a couple of bowling alley lanes.

That’s what the owners would like to see, he said.

“They have this romantic idea of seeing someone come in and being a successful bowling operator,” he said. “But if the right person comes in I don’t know if it necessarily has to stay that way.”

But if you’re thinking you can plan an autumn birthday party at the Shamrock Bowl, think again.

“Timeline wise, I’m hopeful for within the year,” he said, of when a deal might close. “But this isn’t like buying a house in a hot market where you put in a conditional offer and figure it out a day later. These things take time, it’s a large space. It’s not just coming in and looking at the space and saying, I’ll take it. There’s a lot of work that goes on behind the scenes.”