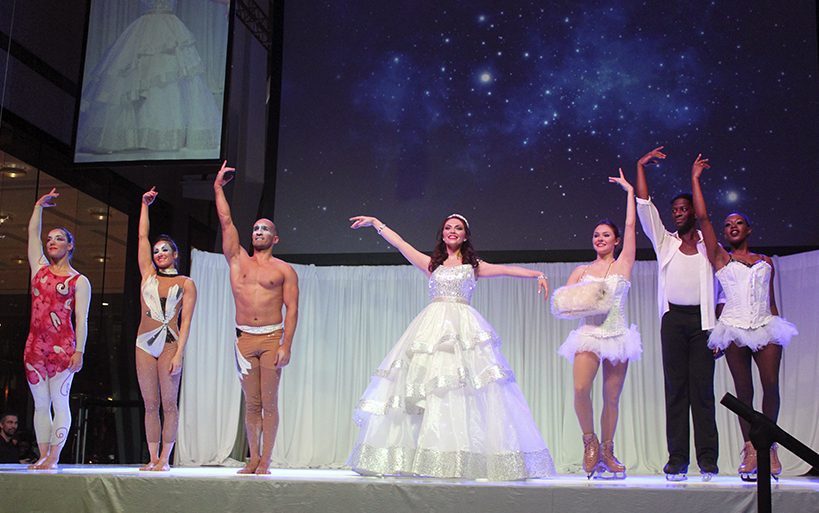 But, as the founder of Glisse on Ice, a for-hire skating show that brings the rink on the road, that’s exactly where life has led her – and it’s a route she’s happy to have taken.

“I was a competitive figure skater in Canada and then I went to Europe for a competition,” said Fry in an interview last month.

Recognizing that she wanted to continue her career overseas, she began auditioning for shows after finishing her competitions.

Fry was accepted into Holiday on Ice – a world-renowned figure skating show that travels around Europe and has performed for more than 300 million visitors.

“I started Glisse [on Ice] just to bring skating out of the context,” explained Fry. While doing shows on city rinks, a politician mentioned the city had a plastic ice surface that they were giving away.

“This politician said, ‘Oh we have this plastic ice surface and we’re going to take it apart,’” she said. “He asked if we wanted some of the pieces.”

It wasn’t long before Fry was hired to perform a show in Cannes on her new fake ice surface and the concept snowballed from there.

She began getting regular gigs bringing the faux skating rinks to unexpected places, like beachside pavilions, around Europe. But despite her success overseas, Fry and her husband decided that after eight years in Marseille, it was time to move back to Canada.

The pair moved back to the Beach initially and have since taken up residence in the Bluffs area. Fry said she and her husband knew they wanted to be near the water.

“I wasn’t sure how [the concept of Glisse on Ice] would go over in Canada but I launched it in the event industry and it really took off,” she said.

Fry began performing at corporate events, weddings and galas and now does an average of 150 shows per year.

“We pop up where you wouldn’t expect to see it, which I think is interesting for Canadians [who are used to a traditional ice rink],” said Fry.

But it’s not just viewers who are experiencing the delight of this sport.

Fry explained that many figure skaters look to take on another art form once they’ve finished touring and competing professionally. Many are drawn to circus arts because of the acrobatics aspect of it.

Glisse on Ice combines elements of skating, dance, theatre and acrobatics to provide athletes with a full range of artistic expression.

And it’s something they have fun doing, she explained.

“We do fashion shoots or we’ll set up the ice in the middle of nowhere just to see where we can take it. When we do little shows in the warehouse it’s like the Andy Warhol’ish of skating. All the skaters come in and they bring their new ideas and it’s like little workshops,” she said.

Now, she’s taking those workshops to the public.

Fry, who has two 19-year-old daughters, explained that she was always looking for creative ways for her kids to get active and try new things, especially in the fall.

Her new workshops focus not only on children between the ages of five and 10-years-old but some will also incorporate the parents.

“The trend of families going out to skate is so huge, so I really wanted it to be like mom needs a refresher course, dad played hockey but he hasn’t done it in a long time. How do you make sure the whole family is comfortable and then make fun workshops for kids?”

The first open house, which involves costumes, dance, skating and circus, will be held September 16 at the group’s Warden Avenue warehouse.