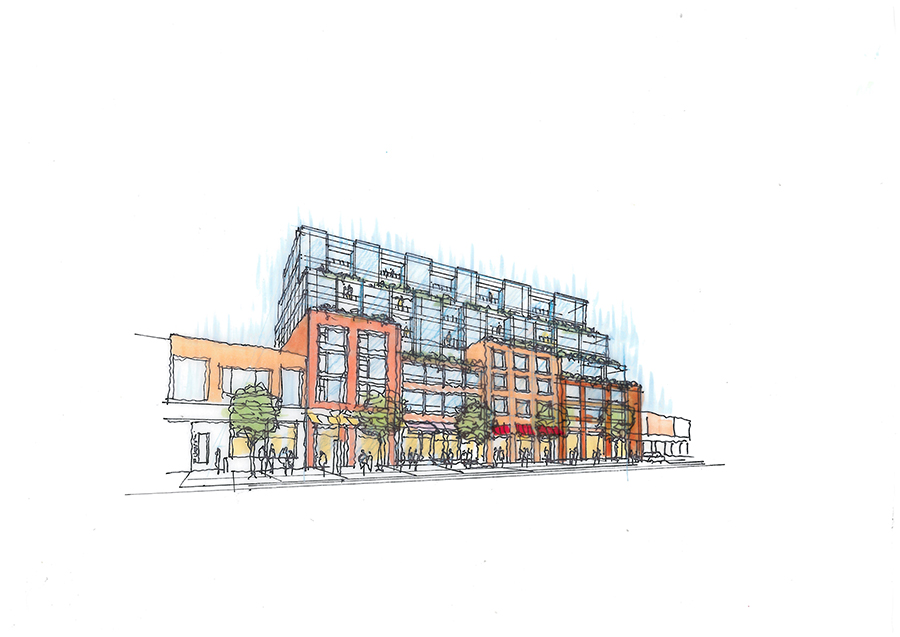 A rendering of what new Danforth developments could look like. PHOTO: City of Toronto

A city-led study of future development on East Danforth continued last week, with city staff revealing what increased heights could be allowed for new buildings on Danforth Avenue between Coxwell and Victoria Park Avenues.

“We’re looking at primarily seven- to eight-storey buildings in specific locations along Danforth Avenue,” said Daniel Woolfson, a senior city planner for the Toronto and East York District, at a community consultation at Hope United Church on Sept. 14.

The heights were presented to local residents for feedback. They aren’t necessarily what staff will end up recommending to city council once the continuing Danforth Avenue Planning Study, the subject of the consultation, is done.

City staff started work on the study last summer with the ultimate goal of creating a set of specific guidelines for Toronto’s Official Plan.

With some exceptions, the Danforth study area is zoned for three- to four-storey mixed-use residential/commercial buildings.

Staff earmarked more than 50 addresses that may be suitable for midrise intensification to at least seven storeys. A lot width of at least 15 metres, a minimum depth of 30.6 metres, and direct laneway access is the specific criteria properties had to meet for seven storeys. If a number of neighbouring properties had the same owner, they were considered as one.

Properties with rental housing, as well as institutions, such as schools and places of worship, and parks and the lots adjacent to them are being excluded from possible intensification. “Not every lot is appropriate for major intensification and midrise [development],” said Woolfson.

A recently submitted proposal for a 30-storey mixed-use condo tower at 286 Main St. is not in the study’s scope, as only properties fronting Danforth are being examined.

But Woolfson suggested the study could influence how planners approach the 286 Main St. application. “You can’t operate on that site and review that site in a vacuum,” he said.

“There are specific things that we can learn from the community that we can apply to that application at 286 Main given its adjacency to the study area,” Woolfson noted.

Given the size of the sprawling Shopper’s World site at the southwest corner of Danforth and Victoria Park, it will be studied separately, and Main Square was already rezoned in 2006 for two additional towers: a 32-storey residential building and a 15-storey mixed-use structure.

Based on feedback, the city will make changes to its vision for Danforth and show it at a follow-up consultation, likely in November or December, said Woolfson. The September event was the third consultation regarding the study so far.

More than one working group’s general consensus was that future Danforth development should not exceed four storeys.

“People want to change things, but when you’re used to something, you really don’t want change because the character of the street, Danforth, is already set, and people already like it the way it is,” said Mary Collins, a 38-year Ward 31 resident.

Some did embrace greater density on Danforth. Caroline Starr, who has lived in Ward 31 for five years, said what the city presented was “very reasonable” for the Danforth.

“If we want this neighbourhood to progress and become a really family-friendly place and a place where businesses can survive, we do need more midrise,” Starr added.