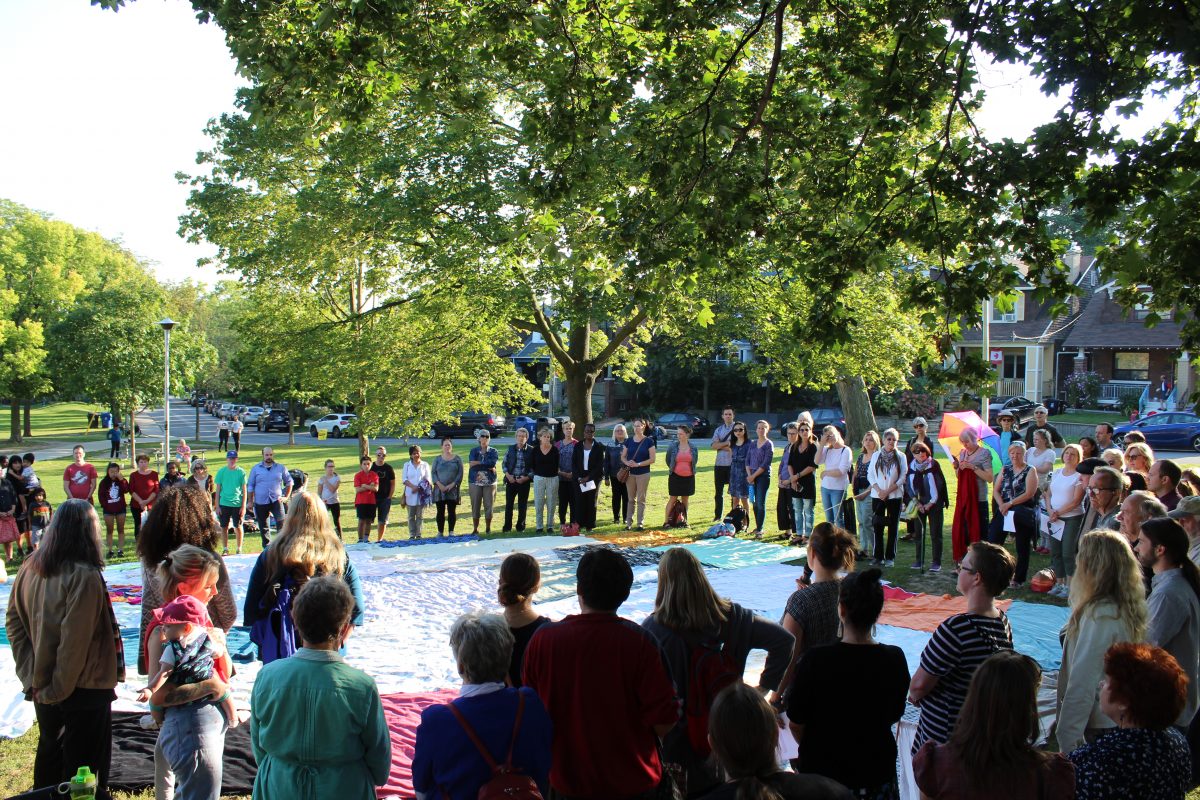 “You will now be placed on reserves,” Siobhan Rowan told the evening crowd assembled in East Lynn Park on Wednesday, Sept. 13, for Ward 32’s first ever Kitchi Blanket Exercise.

The exercise teaches participants about Indigenous history and the effects of colonization, and Rowan was one of the representatives from organizers KAIROS, a program administered by the United Church of Canada on behalf of 10 religious organizations, who was there to help lead it.

Colourful blankets from around Canada were spread out in the park’s grassy northeast corner, symbolizing North America—or Turtle Island as many Indigenous groups know it—hence KAIROS’ use of the word “kitchi,” meaning “really big” in Anishinaabemowin. Participants took on Indigenous and non-Indigenous roles.

“Please fold your blankets until they are just barely large enough to stand on,” Rowan said to the crowd of about 100. The prompt was a reminder of consequences of the 1867 British North America Act and the Indian Act of 1876. It represented the loss of land.

This summer, the KAIROS Kitchi Blanket Exercise took the national stage as a response to Canada 150 programming, drawing about 800 people to Parliament Hill in Ottawa.

“I think that the historical mistreatment of Indigenous peoples in Canada is the most glaring blemish on our historical record and one that it’s incumbent upon us now to not just have conversations about but to actually take action,” Erskine-Smith said.

Sara Anderson, KAIROS’s blanket exercise coordinator for central Canada, noted the exercise’s educational value. “This is significant because more people are interested in Indigenous issues, and in order to sort of make a real attempt at reconciliation, there needs to be understanding,” she explained.

“There’s a reason that truth comes before reconciliation, so this event really helps to provide a foundation of knowledge so everyone is on the same page,” Anderson added.

The roughly two-hour activity journeyed through centuries, from the arrival of early European settlers to contemporary times. Participants heard the last residential school didn’t close until 1996 and that Indigenous women are 3.5 times more likely to experience violence than non-Indigenous women.

“European settlers, please ask one person—a woman, if possible—to find a spot on the ground off of the blankets,” Rowan said during the exercise. “You represent a woman stripped of your status because of this gender inequality in the Indian Act,” she said.

After going through the script, the group broke into smaller circles. Everyone got a chance to share thoughts and feelings.

For Upper Beach resident Cathy Nosaty, the experience “was very emotional.” Nosaty said she knew some, but not all, of the history KAIROS presented. “To hear it also told kind of chronologically and to understand the centuries of oppression—it was staggering,” she said. “I want to learn what I can do towards reconciliation.”

MPP Potts summed his experience up as “emotional” also. “You had a sense of European guilt. You also had a sense of incredibly deep empathy of people upset with the pain that others were going through, so I think it was a great healing exercise,” he added.

The event precedes the Truth and Reconciliation Town Hall that MP Erskine-Smith is hosting Sunday, Sept. 24 from 3 to 5 p.m. at the Beach United Church at 140 Wineva Ave.

There will be a panel discussion on federal issues such as clean water on reserves and the National Inquiry into Missing and Indigenous Women and Girls. Attendees can ask questions and voice concerns in an open forum.

This article has been updated to reflect that KAIROS is an organization that encompasses 10 religious organizations.