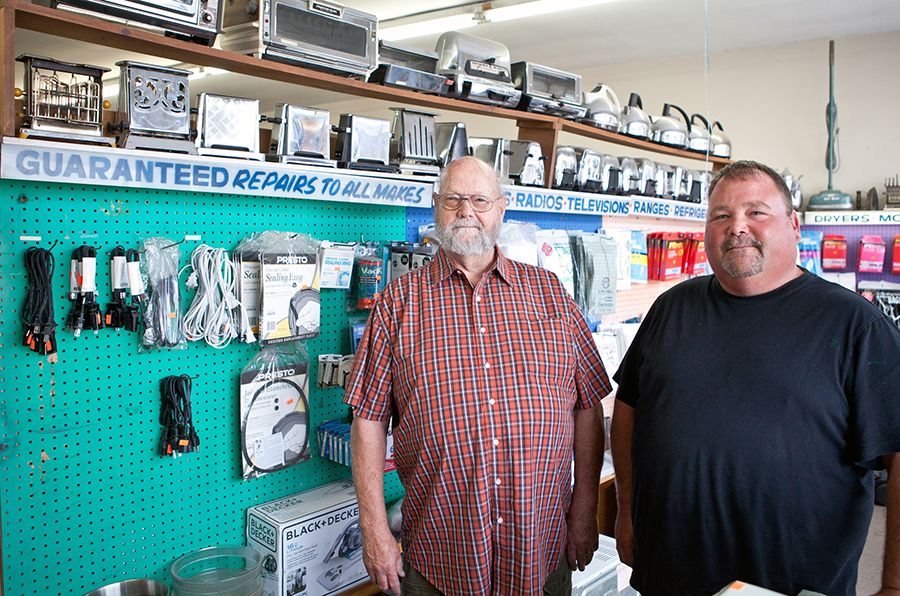 Rick and Craig Butler stand next to an antique toaster collection inside their appliance repair store on Coxwell and Gerrard. PHOTO: Phil Lameira

“I have an espresso machine to fix and I’m told that you guys are the guys.”

Those were the words of new customer Rosalee Lockyer walking in the door mid-interview with Rick and Craig Butler of Butler’s Appliance Repair on Coxwell and Gerrard.

Butler’s is celebrating its 90th—yes, that’s a nine and a zero—anniversary serving the local community in the Little India neighbourhood.

Three generations ago, Ron Butler opened the store at 1467 Gerrard St. E. In 1947, he bought the land on the southeast corner of Coxwell and Gerrard and moved the shop to its current location.

Fixing everything from large appliances like stoves and fridges, to toasters and coffee makers, Butler’s has thrived over the years due to it’s customers’ loyalty and support for local businesses. Some of their clientele are also multi-generational.

“We have a customer who moved to Etobicoke and still comes here to fix his appliances,” said Craig Butler, Ron’s grandson who now works over 50 hours a week at the shop. “I’m sure there must be an appliance repair shop between here and there.”

Ron Butler, Craig’s father, explained how the business has changed over the years. Although there are still many small appliances that are built to last—and therefore worth repairing when broken—a lot of the cheaper brands are simply made to be thrown away once their lifecycle comes to an end.

“Things aren’t as well made as they used to be,” explains Tommy Zoras, owner of Jawny Bakers Restaurant and a customer at Butler’s for 20 years. “Because of that people live in a disposable society. But we don’t. So we like to fix things and [Butler’s] is good at telling us yes, it’s fixable, or no and it’s time to buy something new.”

Up until 10 years ago, Butler’s also used to sell appliances, but with the moving in of big box stores, it slowly phased that aspect of the business out and now focuses strictly on servicing and repairs, with a lot of its workload coming from warranty repairs.

And occasionally, the “odd thing” comes into the shop that doesn’t quite fit the “appliance” description. For example, Craig explained that the shop once got a call from someone in Newfoundland who needed her breast pump fixed. As odd as that may seem, Craig’s favorite was a woman who needed the pump in a cat’s water dish fixed, one that he admits was tricky, but still managed to “make it work.”

“If it’s out there, we’ve pretty much been asked to fix it,” said Rick with a chuckle.

Rick also explained how amazing it has been to see the changes in the neighbourhood. Across the street, for example, there used to be a year-round outdoor fruit stand called Green Acres. “It was funny to see them bring their stuff out and they’d be freezing their butts off.” After 10 or 12 years they closed and Bargain Harold’s opened up, he explained, and now they’re gone and a brewery has just opened up.

Rising taxes and insurance bills have been the major challenges for the Butlers in recent years. “We’re lucky that my father owns the building,” said Craig. “If we had to pay rent it would be very hard to stay in business here.”

But in business they are and busier today than they were ten years ago. The future? Rick and his wife Elaine are looking forward to retirement, and Craig’s 11-year-old son “already asks to help out”.

Craig’s message to the community is “always try to fix first, and replace second.” And as we all know, things will eventually break.