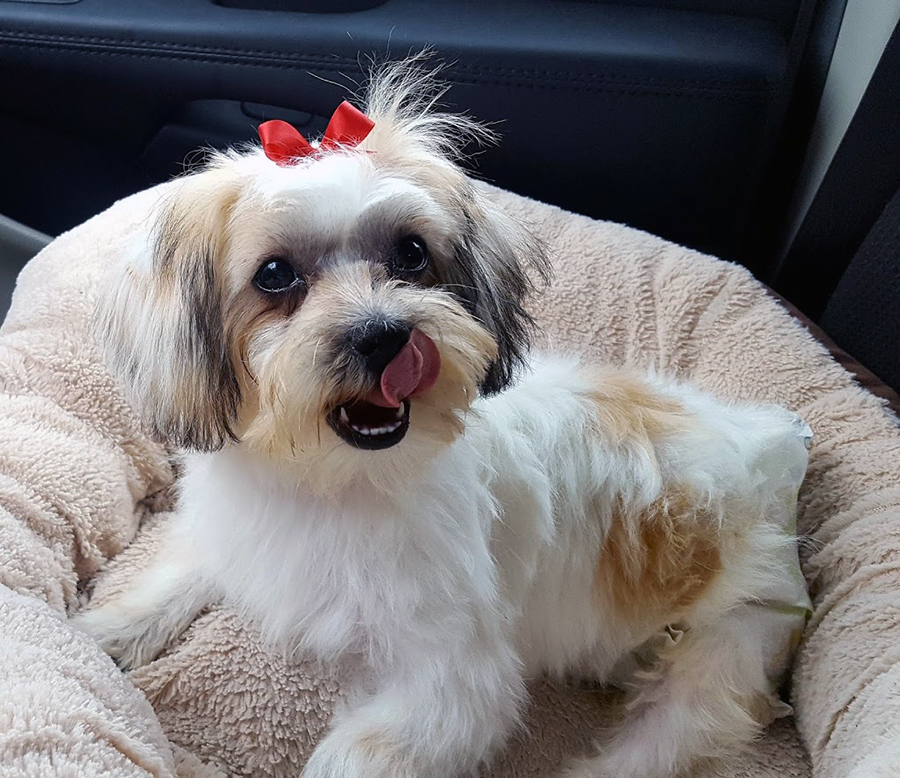 Joy lives up to her name. PHOTO: Submitted

It might be a bit early for Christmas carols, but it’s never too early for a little Joy in your life. The six-month-old Maltese/Shih-tzu mix shining brightly before your eyes is living up to her joyful name with every wonky step she takes.

Despite what you’re about to learn regarding Joy’s beginnings, she’s been living up to her name from the moment she grew into her paws and learned how to walk… or, more accurately, run. Joy has a tough time doing anything in low gear. Perhaps that’s because when she’s running, she doesn’t even know she has a problem.

Just over a month ago, Joy was rescued from a puppy mill in the United States. Her rescuer had made it her mission to come to the rescue of puppy mill victims, ultimately helping them find loving homes through reputable rescue groups. Cute pups with twinkly dispositions like Joy are highly adoptable, as long as they’re in good health.

In almost every way, Joy is the picture of health. But her rescuer could see there was something wrong about the way she moved. She hopped around like a rabbit, keeping her hind legs together. She also appeared to have little control over her bladder and bowels. Her rescuer immediately took her to the vet and hoped for the best.

Unfortunately, x-rays revealed inoperable damage to the base of the spine where Joy’s tail meets her cheeky bum. The injury caused partial paralysis in her lower extremities which in turn left her incontinent. Such news would be rather dismal to hear, but we’re talking about Joy. There’s nothing dismal about Joy.

At the time of her injury, it would have caused excruciating pain but given Joy’s present love for speed and life in general, the accident likely occurred some time ago before she even started to walk. She may have been accidentally dropped at birth which instantly rendered her “damaged goods” for the puppy mill operator.

Joy’s rescuer had no intention of giving up on a puppy that had no idea she was damaged. She did some research and came across a small breed rescue in Ontario that has had some success with paraplegic dogs.

Of course, Carol from Happy Tails Rescue (HTR) refuses to take the credit. “We bring them to specialists and physiotherapists and we even squeeze them like a tube of toothpaste at potty time but our success is measured by their happiness and that’s entirely achieved by their unstoppable positivity,” she said. Take Misu, for instance, a little Maltese that HTR rescued a while ago. He may be paralyzed from the waist down but his new family says he’s a superstar from nose to tail. Case in point: he is now the top advertising model for Earth Rated Pet Products.

I’m not sure rough and tumble Joy is the model type, but Carol is certain she’s destined for greatness. So Joy took a mandatory trip to the neurologist for more x-rays and deliberations on whether muscle tone could be improved to help with the incontinence. There is some hope for that and, while the spine cannot be repaired, there is also hope for increased mobility. Joy quickly proved that theory in a video taken soon after her arrival where she’s leading the pack at warp speed in the backyard of her foster home. Judging from Joy’s joie de vivre, the specialist had to agree it would be worth a try to look into therapy sessions with a canine chiropractor. Joy has been in therapy ever since and she’s making great strides. With a combination of adjustments and massage, Joy is showing more strength and flexibility – even her tail is working on a brag-worthy wag.

The chiropractor has also suggested water therapy when she’s a bit stronger. But of course Joy had already tested the waters when her foster mom took her for a stroll at Cherry Beach. One minute, she was bunny-hopping through the tall grass. The next minute, she was bull-frogging it in the lake! Maybe becoming a speed swimmer is in her future?

But whatever the future holds, Joy’s doting humans must keep her grounded for the time being. Baby steps – whether she likes it or not. Thankfully, there’s nothing Joy doesn’t like so she’s okay with the process.

Joy likes everything and everyone. Take the time she met another foster parent’s American Bulldog. Most dogs her size are more than a bit cautious meeting him for the first time – but not Joy. She figured him out the moment they met. After boldly introducing herself, she could tell he only “looks” scary. Then she was climbing all over his head: Joy’s way of expressing immense affection.

Joy is still considered incontinent at this time – or, as her foster mom puts it, she’s a 4-legged Pez Dispenser that sometimes gets activated when she’s barking for joy. But no matter if she stays this way or not, she’s still a delight to have around. Did I mention her colourful collection of onesies that she wears over her diapers?

Carol figures that in a month or two when she’s completed the therapy program, Joy will be ready to spread joy to a family of her very own. Good timing. The closer to Christmas, the more appropriate that Christmas carol will be when Joy comes over to deck your halls with howls of jolly!